A group of men on Wednesday brought in loads of concrete barriers and huge rocks (foreground) and then confronted and beat sea gypsies, and told them to stay out of the Rawai area where they have lived for generations. (Photos courtesty The Phuket News)

Deputy Prime Minister Prawit Wongsuwon has ordered state agencies to find a solution to the land dispute conflict that led to attacks on sea gypsies living in Phuket's Rawai Beach on Wednesday.

Calling for an end to the violence which broke out when a group of sea gypsies were attacked by a group of men in a dispute over a 33-rai property that blocks a walkway to the sea gypsies' ritual site, he said a probe was needed.

He said the sea gypsies have been on the land for a long time so authorities must look into the legality of the company's land deeds.

"There must not be any violence any more. The wrongdoers must be arrested," he said. "The company claims they have land documents. We must talk and pass through this problem."

Baron World Trade Co, claiming to have legally obtained the land's title deeds, is developing villas on the plot. Construction work started on Tuesday, leading to a protest and eventually the confrontation on Wednesday. Officers were reportedly spotted guarding the property.

According to video clips released on social media, a group of men, some holding wooden sticks, were blocking sea gypsies from entering the property.

Two trucks loaded with rocks appeared on the scene and poured their contents on the ground in front of crying sea gypsies. A group of men used sticks to hit the sea gypsies.

One sea gypsy said about 25 Cho Lay people were injured and some fishing equipment damaged. He claimed the community, which has been on the Rawai beach for generations, had received threats over the last eight months. 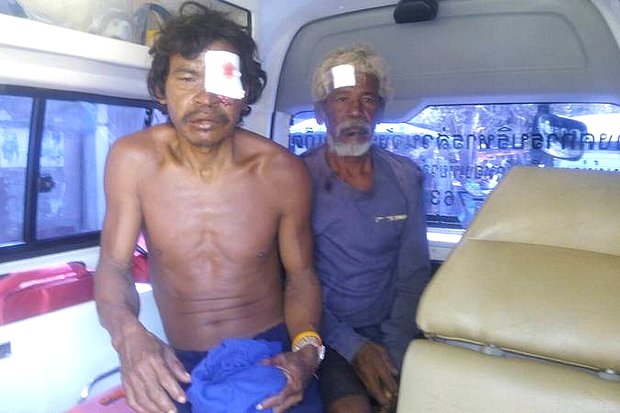 Two of the injured Chao Lay people injured in a confrontation with outsiders are taken to hospital.

Dated Dec 30, the document says the company asked Chalong police in Phuket to deploy some officers for protection. A high-ranking military officer agreed to the deployment.

"If he finds any government official involved in violence [over land disputes], the governors must report which official is involved," he said.

Phuket governor Chamroen Tipayapongtada later ordered the company to remove the barriers and rocks blocking the sea gypsies' path. The two sides will meet on Tuesday to find a solution.

Meanwhile, the Network of Indigenous Peoples in Thailand condemned the attackers and called on the government to address the problem in accordance with the 2010 cabinet resolution supporting the preservation of sea gypsy culture.

It also called on all parties to solve the problem while respecting human rights principles.

Baron World Trade Co's representatives couldn't be reached for comment. According to a probe by the Department of Special Investigation in 2014, DNA from bones in the area proved sea gypsies have been on the land for over 60 years.

The National Human Rights Commission's Subcommittee on Community Rights and Natural Resources will launch a probe into the case on Tuesday.