Monks perform a merit making ceremony for red-shirt demonstrators killed during the 2010 military crackdown. The event at Ratchaprasong intersection on May 19 2012 marked the second anniversary of the crackdown and was attended by about 45,000 red-shirts.(Bangkok Post file photo by Patipat Janthong)

The Appeals Court on Wednesday upheld the Criminal Court's rejection of a case against former prime minister Abhisit Vejjajiva and his former deputy Suthep Thaugsuban for the deadly military crackdown on red-shirt protesters in 2010.

The case was filed by special case litigation prosecutors at the Office of the Attorney-General against the two men in the Criminal Court on the recommendation of the Department of Special Investigation (DSI).

The Criminal Court in August 2014 dismissed the case, in which Mr Abhisit and Mr Suthep were charged with murder and attempted murder in connection with the 2010 military crackdown on the red-shirt protesters of the United Front for Democracy against Dictatorship (UDD). 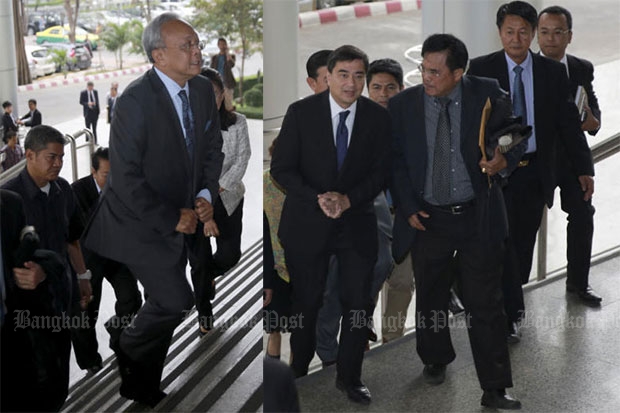 The court ruled that it did not have jurisdiction to handle the case, saying it should have instead been brought before the Supreme Court's Criminal Division for Holders of Political Positions.

The prosecution appealed.  The Appeals Court ruled that Mr Abhisit and Mr Suthep issued the crackdown order in their capacity as prime minister and deputy prime minister in charge of the Centre for the Resolution of the Emergency Situation (CRES), not as individuals.

It agreed with the lower court that the case should be brought before the Supreme Court's Criminal Division for Holders of Political Positions, and that the DSI did not have the authority to investigate the case.

The Appeals Court in its ruling on Wednesday upheld the dismissal of the case.

After hearing the ruling, Mr Suthep said the National Anti-Corruption Commission had ruled that he and Mr Abhisit were not in the wrong.

Mr Suthep said he had washed his hands of politics and would concentrate on working for his foundation. He would not comment on politics.

Mr Abhisit said the case was not yet final, as he did not know whether the prosecution would take it to the Supreme Court.