Construction is at a snail's pace and the man in charge of the 12 billion baht project "can't even estimate" when his crews are likely to finish the new parliament building on the Chao Phraya River. (Photo by Apichart Jinakul)

The progress of work on the new parliament building is only 18% complete and contractors will again miss their year-end deadline, which comes after a one-year extension granted earlier.

The extended construction period of 387 days, given to Sino-Thai Engineering & Construction Plc late last year, appears to have helped little, according to National Legislative Assembly (NLA) chairman Pornpetch Wichitcholchai, who inspected the site.

"We cannot even estimate when it will be completed," said Mr Pornpetch, who oversees the 12-billion-baht project.

One key reason for the delays is that parts of the construction site, covering 300,000 sq m of land by the Chao Phraya River in the Kiakkai area, have not been handed to the contractors.

The project also hit setbacks when a plan to sell part of the soil, dug out to clear an area for the main parliament building and underground storeys, hit delays. Some buildings have not yet been demolished to pave way for the construction work.

The NLA is not authorised to knock them down because it needs approval from the Treasury Department, Mr Pornpetch said.

He said he "doesn't understand how the [construction] contract was signed" when those buildings had yet to be demolished.

The contract was signed in 2013 and work was supposed to finish on Nov 24 last year. 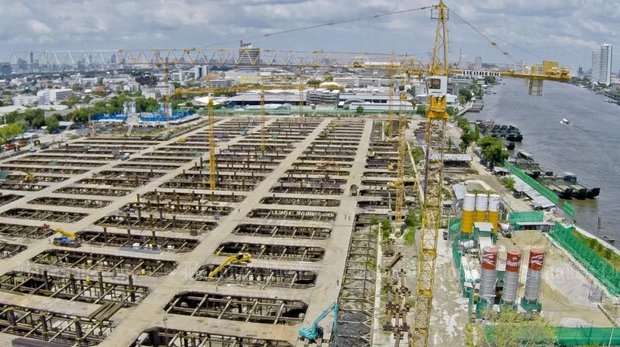 This was the construction site in June, 2015, when parliament secretary Jarae Pruangpan took the media to see the delayed project. (Photo by Krit Promsaka na Sakolnakorn)

However, with the unsettled problems hindering the work, House of Representatives secretary-general Saithip Chawalitthawil signed a new agreement giving the contractors another 387 days.

At the end of this new deadline, the complex will only be 30% complete, Mr Pornpetch said.

The NLA chairman says he has found no corruption issues in the project. "However, I don't know who will hold responsible if the House is not finished again," Mr Pornpetch said.

"But it's not me because my job concerns only contract management."