The military regime has "suggested" to the Constitution Drafting Committee chairman Meechai Ruchupan that the next charter should keep the junta in power even after elections and a civilian government. (File photo)

The military government has proposed that the Constitution Drafting Committee (CDC) prolong its tenure after the general election, which, if effective, could overrule the authority of an elected government.

Of 16 proposals submitted to the charter drafters, headed by Meechai Ruchupan, the last item suggests that there be a special set of rules during a transitional period to avoid plunging the country into another crisis.

The proposals request that the CDC extend the special powers of the National Council for Peace and Order (NCPO) and NCPO chief after the election and after having a new elected government.

The government claims the proposal is out of concern that a possible conflict or crisis may arise after the enforcement of the new charter and may derail national unity and reform efforts. It bases its concerns on certain views that cast doubt about the proposed systems through which politicians come to power and their scope of authority.

"So the cabinet is thinking what if the content and the enforcement of the charter is divided into phases. One set of rules is used in the transitional phase, which may not be for long, and is for the sake of keeping peace and order, but is still based on elected and democratic rule," according to the proposal.

Section 257 of the draft charter stipulates that the NCPO will remain in office retaining their full powers as stipulated in the 2014 interim charter and its clauses until a new cabinet is formed after the general election.

It is believed that the full powers of the NCPO chief include the invocation of the controversial Section 44.

The proposal has alarmed critics of the military junta who see it as a signal for the CDC to extend the military government's stay in power after the general election and even after an elected government takes office.

Democrat leader Abhisit Vejjajiva Thursday voiced his disagreement with the cabinet's proposal, saying he was aware of the military's concerns but such a move would not solve the problem in a sustainable manner.

"If they are concerned about the situation after the general election and they want special powers to handle a problem, my question is for how long?" he said.

Mr Abhisit said it would be better for the CDC to look at the causes of the political crisis and violence, and try to eliminate the conditions that trigger them.

"I once said that even if we had a crisis panel on May 22, 2014, the crisis panel could not do anything besides declaring martial law. To solve the problem, we have to look at the duties of all stakeholders and engage them," he said.

Adul Khiewboriboon, chairman of a committee of relatives of the Black May 1992 victims, said the cabinet proposal is a clear indication that the military wants to be in control after the general election.

He warned that history could repeat itself, pointing to the Black May uprising in 1992, when huge protests erupted following the 1991 coup d'etat by Gen Suchinda Kraprayoon.

"I think the NCPO is thinking too much [about a political crisis]. I tried to warn that it would be impossible to obtain democracy with Mr Meechai taking charge of the drafting. When the NCPO appointed Capt Thinnaphan [Nakhata] as chairman of the National Reform Steering Assembly [NRSA], it was looking to push for the national strategic committee. 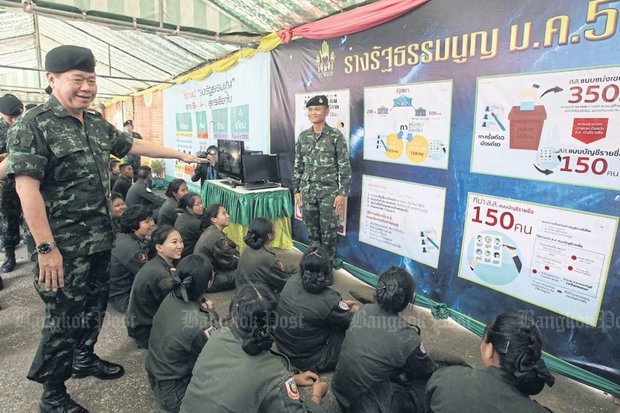 Royal Thai Army commander Gen Thirachai Nakwanich (left) and a special propaganda unit brief territorial defence students on the draft constitution at the Khao Chon Kai field training facility in Kanchanaburi. The military has recommended it stay in power after elections in order to control the new civilian government. (Photo by Pornprom Satrabhaya)

Meanwhile, another key charter proposal compiled by the cabinet calls on the CDC to revise the draft charter to ensure the general election process conforms to the NCPO's political roadmap of having the polls held in July of next year.

The provisional clauses in the Meechai draft say the election of MPs will take place within 150 days after the National Legislative Assembly enacts the last of the 10 organic laws.

The process of the CDC drafting the organic laws and their enactment is expected to last up to eight months. But if the laws cannot be enacted by the deadline, the current CDC will be dissolved and a replacement will be established to complete the drafting of the remaining organic laws, a task that would further lengthen the road-map.

The government's proposal suggests that the CDC should only write the laws necessary for holding the general election and the Senate poll. The remaining laws can be completed before a new government is formed.

Other proposals include a separate chapter that deals with national reforms and a clause allowing political office-holders facing corruption charges to appeal court rulings to a higher tribunal.

Currently, cases are heard in the Supreme Court's Criminal Division for Political Office-Holders and the rulings are considered final.

In a related development, Mr Meechai on Thursday bowed to calls to include what is known as Section 7 in a chapter on the monarchy.

The content of the so-called Section 7 says when no clauses in the constitution are applicable to a case, it will be decided in accordance with constitutional practice.

However, the section is deemed controversial because different sides could interpret it in their own way to justify their stance in a conflict.

Under the draft, the content is included in a chapter on the Constitutional Court and Mr Meechai claimed details were added to make it clear and avoid misinterpretation.

Mr Meechai said he would use Section 5 of the interim charter as a guideline for its revision. This means the Constitutional Court can be asked to provide a judicial review in the vent of a dispute.