Deputy Prime Minister Prawit Wongsuwon warned anti-government critics they face up to a week long of detention for remarks considered as damaging the nation and causing conflicts. (Photo by Thanarak Khunton)

Government critics who make comments deemed not to be in the nation’s interest will be detained for “attitude adjustment” for up to a week, said Deputy Prime Minister Prawit Wongsuwon, marking the latest curtailment in freedom of expression under the military regime.

"If they speak so 100 times, they will be summoned 100 times," Gen Prawit said of those who continue to criticise the junta despite repeated warnings. "A talk can last 3-7 days if their remarks damage the nation and cause conflicts. Laws must be enforced."

The remarks by the general, who also serves as defence minister, came after prominent Pheu Thai Party figure Watana Muangsook was brought by soldiers to a Bangkok army base after he blasted Gen Prawit for "sexist" remarks made about former prime minister Yingluck Shinawatra.

The 70-year-old general had joked that soldiers were tasked with shadowing and taking photos of Yingluck "probably because she is pretty".

In a strongly worded Facebook post, Watana wrote he thought it was "unbelievable to hear such comments. They were sexist." He also insinuated that Gen Prawit should keep such thoughts to himself lest others think he is stupid.

Speaking to reporters Wednesday Gen Prawit said Watana had been "invited to talk"  for "expressing false information", not for insulting him. 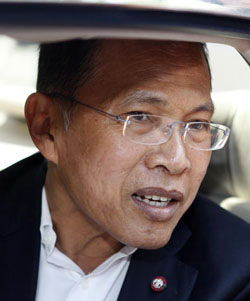 "What did he do? Whom did he verbally attack? Did he speak about me?" Gen Prawit asked rhetorically. "He expressed an opinion that misled society, so we invited him for talks."

Col Winthai Suvari, spokesman for the National Council for Peace and Order, said on Wednesday that Mr Watana's attitude adjustment session was warranted based on his comments over the past two days.

He accused the NCPO of clinging on power and had shown an unacceptable amount of negativity, Col Winthai said. His remarks could distort people's perception of the NCPO.

"It is understood by most people that Mr Watana was affected by the NCPO's actions to solve problems and this could have caused him to be prejudiced and have a negative attitude. Officials must handle such situations to ensure order," Col Winthai said.

The Pheu Thai Party on Wednesday demanded the government immediately free Watana, saying his detention was a serious rights violation. It also said Watana had made honest comments, and if the government considered his acts as illegal then it should take legal action.

Since seizing power in May 2014 the junta has crushed dissent, banning political discussion, locking up opponents and dramatically increasing prosecutions under laws covering lese majeste, sedition and computer crime.

So-called attitude adjustment sessions have also been instituted, with critics arbitrarily detained by the military, often for days. They are released once they sign a form promising to refrain from criticising authorities, sometimes under the threat of asset seizures.

According to local rights group iLaw, which monitors detentions, more than 800 people have been ordered to attend such sessions since the coup.