Key figures of the Pheu Thai Party have voiced opposition to the government's push for a wholly appointed senate to remain in office for five years after elections to ensure the elected government implements its plan for national reforms.

Noppadon Pattama said on Thursday that if senators have power to scrutinise laws, appoint independent organisations, impeach political office-holders and amend the constitution, they should be elected and truly represent the people. They should not represent any individual or group of individuals.

Appointed senators' political impartiality would be questioned if they took office to maintain the power of any group or party, he said.

If senators were to ensure the implementation of national reform plans, Thai people should have their say in the reforms through senators they elect, Mr Noppadon said. 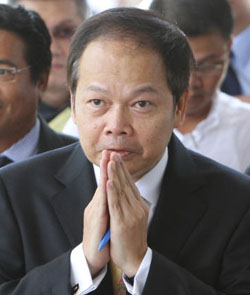 Pheu Thai politician Surapong Tovijakchaikul said on Wednesday the CDC was likely to support the idea. He objected to a fully appointed senate, saying he valued his right to elect a senator to work in his interests.

Gen Prayut and Gen Prawit have strongly advocated having an appointed senate in office for  five years after  the polls, so that senators could ensure the next government practises good governance and implements national reform plans.

Politicians should work not only for their own interests, but also for the good of the country, Gen Prayut has said repeatedly.

If the old system of senatorial elections returned then relatives, children and wives of politicians would again be elected to the senate and the nation would not progress, the prime minister said.