Thais and Thai-Americans hoist placards in New York to protest against the presence of former premier Thaksin Shinawatra at a private club where he spoke on Wednesday, March 9. (AFP photo)

Fugitive former prime minister Thaksin Shinawatra took his global publicity tour to New York on Wednesday, condemning Thailand’s draft constitution as a step backwards that may be rejected by the international community.

Thaksin's message in all the sessions was similar: Thailand's military rulers who seized power from his sister, Yingluck, in May 2014 are desperate to cling to power and propagating a constitution that serves no one's interests but their own.

"If we look at their behaviour, as if they would like to stay as long as possible," he said in his interview with AFP. He said he did not trust Gen Prayut Chan-o-cha's promise to hold elections next year and he repeatedly expressed concerns about the future of Thailand if the new constitution is adopted. 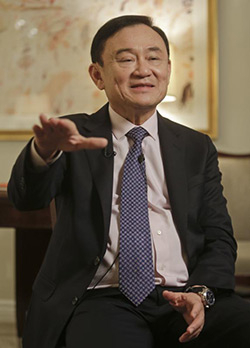 Meeting with the AP, Thaksin maintained any elections held under the new constitution will deny the will of the majority of the people.

"That is backward democracy," he said. "Under democracy, you have to give the power to the people."

In his public speech, Thaksin said what he is worried about "is the military regime". The draft constitution, if adopted as is, may not be internationally acceptable, he contended.

The draft is currently undergoing revision based on feedback from the National Council for Peace and Order, government and various agencies and independent groups.

Mr Fuller of the Times asked Thaksin if he would use his resources and assets to wage a campaign against the draft constitution. According to the correspondent's tweeted reply, Thaksin said he "cannot do much because I am not in the country... When I voice my concern, my supporters will come out to campaign."

In a follow-up tweet, Fuller quoted Thaksin as saying his assets and resources these days "is not that much. Altogether, the whole family, it's about $1 billion."

Thaksin had to stop his speech at Manhattan's posh Metropolitan Club at one point due to the clamour caused by pro- and anti-Thaksin demonstrators shouting outside. His opponents waved placards describing the ex-prime minister - who was convicted of corruption in 2008 and sentenced in absentia to two years in jail - as a "devil" and a "monster".

Taking another dig at Thailand's junta -- which has imposed increasingly strict controls on speech and assembly - Thaksin quipped that he hoped his opponents outside were enjoying their "freedom of expression" in the US. 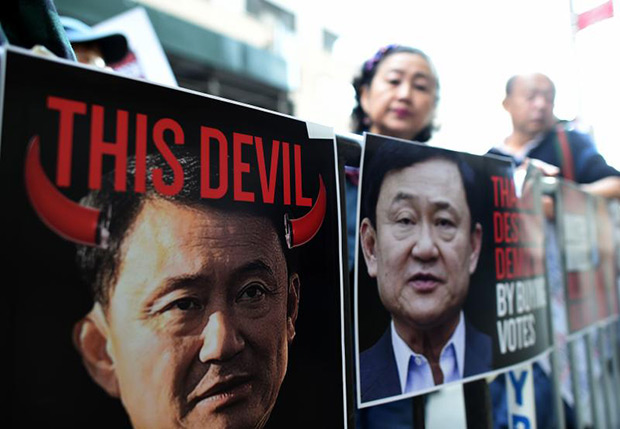 Demonstrators display placards as they protest against deposed former premier Thaksin Shinawatra outside a private club where he spoke at an event in New York on March 9. (AFP photo)

More than 10,000 people signed an online petition calling on the World Policy Institute to cancel Thaksin's appearance, claiming that, by giving him a platform, the think-tank was "supporting a corrupt politician".

In a statement posted on the internet March 8, World Policy Journal defended its parent's decision.

"What Thaksin has to say ... is newsworthy and could provide insights into one of the most influential individuals in modern Thai history," the statement read. "Plus, his speech will be on the record, so we'll be able to report back what he said. This is not a secret meeting between shadowy elites, but, rather, a chance to hear from and interrogate a figure of global importance."

Thaksin told the AP he misses home but was not really in a rush to return and had little enthusiasm for getting back into politics, although he wouldn't rule it out.

"I wish I can go (home). I'm quite settled outside Thailand and if I go back to Thailand it should benefit the country and the people. Otherwise I'm not really serious about going back,'' the AP quoted Thaksin, who lives in the United Arab Emirates, as saying.

He insisted for the moment that he was happy to stay in Dubai and travel, mentioning Beijing and London as favourite destinations.

He said he wanted Thailand to prosper and Thai people guaranteed freedom of speech and human rights protections.

"I'm not ruling myself out but I have no ambition to do it again," he told AFP of his political inclinations. "I'm 67 already now," he added. "I want to live my life peacefully."

What he said he was worried about, however, was the fate of his sister. Ms Yingluck has been charged with mismanagement of a rice-subsidy programme for which she faces up to 10 years in prison if convicted.

Then Thaksin said this: "I’m ready to sacrifice, to stay out, if the country is moving forward and they respect the voice of the people."

He contended that hers "is the only case in the world'' where a prime minister has been prosecuted over a government policy that effectively banned her from politics for five years.

"This is really ridiculous and we worry about the justice that she will receive," Thaksin told the AP.

He said the treatment of Ms Yingluck is symbolic of the junta's failure to reconcile the country's embittered rival political camps.

He said Thais are very patient people, and were willing to believe the military when it took over in 2014 to "reconcile the differences of the people in the country".

"But so far, one-and-a-half years (later), they have nothing (to show for) reconciliation,'' Thaksin said in his speech, adding that, in fact, the opposite is true. The military rulers are "not providing justice for all. They only are trying to use the law to benefit their own politics".

Ms Yingluck's case is one reason why, after nearly two years of silence, Thaksin stepped out of the shadows in recent weeks, giving interviews to media organisations including Al Jazeera and Reuters, releasing a coffee table book documenting his years, and creating a calendar with his sister.

Prime Minister Prayut lashed out at Reuters' Bangkok-based reporter for giving Thaksin a platform, banned distribution of the calendar and repeatedly criticised coverage of his speeches.

"If they keep bullying me and my supporters it shows the whole world that there is no rule of law," Thaksin told the New York Times' Mr Fuller of the harassment. Mr Fuller tweeted that Thaksin's message to the military was simple: "Hey, if you are worried about me. If you're afraid of me going back to power, you talk to me."

The NCPO recently rejected calls by the deposed 66-year-old billionaire for talks.