China agrees to use only Thai workers

China will no longer help to fund the Rayong-Nong Khai high-speed rail service through Bangkok, but will help to plan and build it, and Chinese rolling stock like these models will be used. (File photo)

Prime Minister Prayut Chan-o-cha on Thursday affirmed the government's decision to wholly invest in the Thai-Sino railway project after failed talks over the past two years with China on details of what was supposed to be a bilateral investment project.

He said the government will divert state budget funds and seek domestic loans to fund the dual-track rail project but will still treat it as a Thai-Chinese government-to-government matter.

Gen Prayut said China will oversee the development of the rail system on the condition it will use Thai engineers and workers and the project must pass an environmental impact assessment. 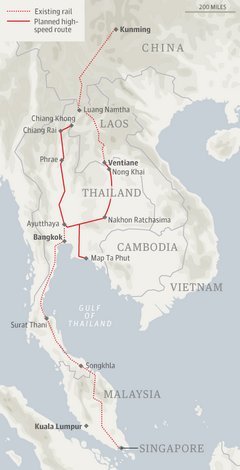 The premier said China fully understood Thailand's conditions and respected the government's decision to switch from seeking loans from China to using domestic money to fund the project.

The new rail system is intended to serve as a transport link between Thailand and China via Laos, Gen Prayut said.

It is estimated about 530 billion baht will be required to fund the project, ranging from the cost of land expropriation to the expense of buying trains and developing the rail service operating system.

The Thai-Sino dual-track rail route, which can handle medium- to high-speed train services, will involve two phases of construction.

The loan issue has played a part in delays in the Thai-Chinese train scheme as the government repeatedly urged China to cap the interest rate at 2%. The government argued China was pushing for too high a rate and negotiations failed to make progress.

Even after a year of studying possible costs of developing the first phase of the project, the Thai and Chinese sides could not agree on a figure, Transport Minister Arkhom Termpittayapaisith said.

The Thai side concluded the first phase required 170 billion baht while the Chinese side insisted on its estimate of 190 billion baht, he said.

Gen Prayut stressed the need for China to lower its calculation of the project's costs for the sake of their cooperation.

On Wednesday at the first Mekong-Lancang cooperation leaders summit in Sanya, Hainan province, Gen Prayut finally announced that Thailand will invest wholly in the project.

The government hopes its decision to go it alone can overcome project delays. Implementation of the project is now about five months behind schedule, he said.