Gen Prayut also directed police to check whether supporting a "wrongdoer" or a fugitive was illegal.

The move followed the seizure of the red plastic bowls bearing a Songkran wish from the house of a former Pheu Thai MP in Nan province.

She was charged with spreading messages which incite unrest. Authorities believe the message on the bowls is seditious. 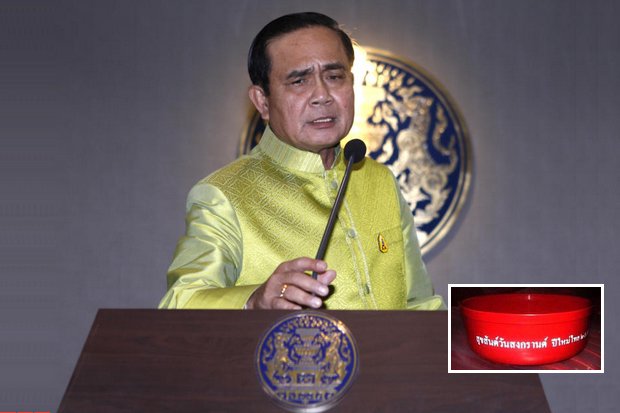 Prime Minister Prayut Chan-o-cha: Why do people want to get free red bowls?

Authorities seized 8,862 red bowls screened with the message: "Although the [political] situation is hot, let our brothers and sisters be blessed with coolness through this bowl. Happy Songkran", and Thaksin's signature.

The bowls were gifts from the former prime minister, who was overthrown in a 2006 coup and later fled the country in 2008 to escape corruption charges.

Before giving directives, Gen Prayut made cryptic remarks saying: "Why are red bowls given to people? Why not yellow ones or other colours? Is the red one more practical than others of different colours?"

"Why do people want to get free red bowls? Why don't they buy one themselves? It's cheap.

"If the giver is full of good intentions, he or she had better distribute a jar which can be used to store rain water to people," Gen Prayut said.

Thaksin on Sunday sent messages to his followers on Instagram.

"It is the custom for me to give away free water bowls to people to celebrate the Songkran festival," he wrote. It has been done for years without problems. It has not shaken the security of the country. The government should spend its time tackling the drought, unrest in the deep South and drug problems." 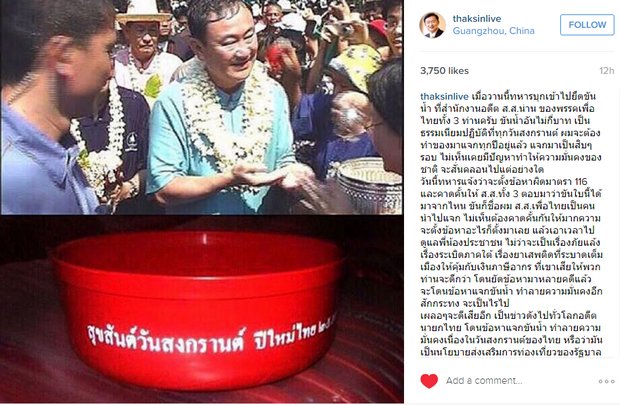