The Pheu Thai Party's plan to distribute red bowls for the Songkran water festival this month would cause disunity and politicians caught doing it would be sent to attitude adjustment camps, government spokesman Sansern Kaewkamnerd said on Monday.

Maj-Gen Sansern issued the warning in response to a report that a Pheu Thai politician in Nan province would distribute the red bowls sent by the party's de facto leader Thaksin Shinawatra.

He said it was a project with a hidden agenda and was unacceptable because it came with the intention to divide people, at a time most people in the country were trying to leave behind conflicts and past problems and promote national reconciliation. 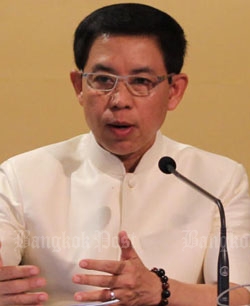 "There are many ways to show sincere intentions toward the festival and the nation, but an action like this with a hidden objective can be seen only as the festival being used as an opportunity to cause division and unrest in society," Maj-Gen Sansern said.

The government had tried to be patient of ulterior motives, and to let all people and parties behave in the national interest, not individual interest, but it had been proved that time alone did not improve someone, he said.

He hoped people in general were aware of the ulterior motives of such ongoing activity.

The politicians and people who continued to cause disorder would be brought in to attend a seven-day long  course of talks to adjust their attitude at military camps nationwide, including in the far South, Maj-Gen Sansern said.

"This is expected to reduce, prevent or stop such attempts to create disorder. Thailand needs unity from everyone," the government spokesman said.

Authorities recently seized nearly 9,000 red bowls from former Pheu Thai MP for Nan Sirintorn Ramasut. They bear a message from former prime minister Thaksin Shinawatra, who fled the country in 2008 just before being sentenced to two years in prison for abuse of authority while in office.