One of the 547 red bowls seized from the home of a former red-shirt member is displayed at the Sikhoraphum police station in Surin on Saturday. (Photo by Nopparat Kingkaew)

SURIN — Soldiers and police confiscated more than 500 red bowls with the signature of former prime minister Thaksin Shinawatra before they could be distributed to his supporters on Saturday.

The seizure took place after a tip-off from villagers at tambon Tlae in Sikhoraphum district that the secretary of the local tambon organisation administration had stocked red plastic bowls for the Songkran celebration.

Homeowner Palangpol Mumthong was taken to the Sikhoraphum police station for interrogation.

Mr Palangpol, a former red-shirt leader in the province, said he had received the bowls last month from a man known only as Dui, who had asked whether he needed them for Songkran.

Authorities suspected that the bowls were to be distributed to other red-shirt members in the tambon for the upcoming Thai New Year water festival. 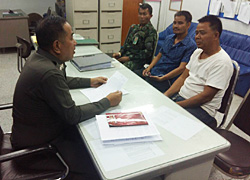 An officer questions Palangpol Mumthong (right) at the Sikhoraphum police station in Surin following the seizure of red bowls from his house. (Photo by Nopparat Kingkaew)

Mr Palangpol said he was not aware of the consequences of having the red bowls in his possession.

Sikhoraphum police chief Pol Col Nithis Pititheerachote said the bowls were a political statement because they bore the signature of the fugitive former prime minister and the following message. "Although the [political] situation is hot, let our brothers and sisters be blessed with coolness flowing from this bowl. Happy Songkran."

Mr Palangpol signed an agreement promising to wash his hands of the red  bowls.

The bowls seized in Surin were identical to almost 9,000 bowls confiscated from the home of a former Pheu Thai MP in Nan province on April 1.

Prime Minister Prayut Chan-o-cha ordered authorities earlier this week to determine whether distributing the red bowls would be illegal. Government spokesman Maj Gen Sansern Kaewkumnerd warned Pheu Thai members that they risked sending to "attitude adjustment" camps if they gave the bowls out to supporters.