Prayut: New one to be drafted if charter is rejected
Thailand
Politics

Prayut: New one to be drafted if charter is rejected

If the draft constitution is voted down in the Aug 7 referendum, a new one will be written from scratch and no past charter will be used in its place, said junta chief Prayut Chan-o-cha said on Tuesday.

"I'll use the version in my head and heart. I won't use anything else," he said.

Reporters had been asking him that question for months but up until now Gen Prayut had remained mum.

Deputy Prime Minister Wissanu Krea-ngam said earlier past constitutions, specifically the 1997 and 2007 charters, as well as the Borwornsak Uwanno and Meechai Ruchupan versions, might be merged to create a new one.

Mr Meechai had also said the version prepared by the NCPO as backup might be even tougher than his draft. 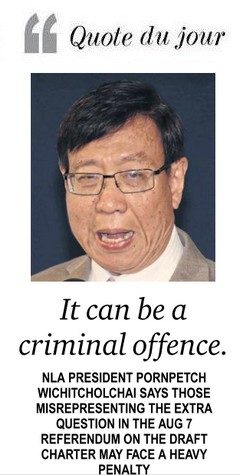 Asked what he thought about politicians' call to help people understand the charter and the referendum, Gen Prayut said: "Don't cite the people. Why didn't past governments do something? Why do people remain poor? Stop citing them.

"While 100% of reporters are keen on the charter, only 40% of the people are interested in the constitution, according to government surveys. Several know nothing about the constitution. They don't know what the Constitution Drafting Committee is. When asked what they wanted, they said they only needed water to farm. These are differences in thoughts and the gap is wide," Gen Prayut said.

He added the cabinet approved a budget of 2.99 billion baht for the referendum on Tuesday because "it had to be held".

"I don't know whether it will be a waste since so far [elections] have made no difference. Several countries just promulgated charters after they were done without holding referendums and they are doing fine," he said.