The Constitution Drafting Committee (CDC) will ask the government to provide protection during a campaign to educate the public about the draft constitution amid concerns about the potential risk of disruptions by opponents resorting to "dirty tricks".

The move comes after two major political parties -- the Democrats and Pheu Thai -- have declared their intention to oppose the draft charter.

Democrat leader, Abhisit Vejjajiva, held a press briefing on Sunday to voice his party's opposition to the draft charter and the extra question which would allow the appointed Senate to help select a prime minister after an election, though he did not comment on whether the party would reject the document in the referendum scheduled for Aug 7.

The Pheu Thai Party has called for the draft charter to be rejected.

CDC chairman Meechai Ruchupan admitted he was concerned the CDC's campaign could be at risk of disruption if political parties do not play by the rules and lack political principles.

Dates for the campaign have not yet been determined as the CDC gears up its information promotion efforts.

While the National Council for Peace and Order (NCPO)'s ban on political gatherings remains in effect, the CDC may still have to ask that authorities provide security to prevent disruptions during its campaign, Mr Meechai said. 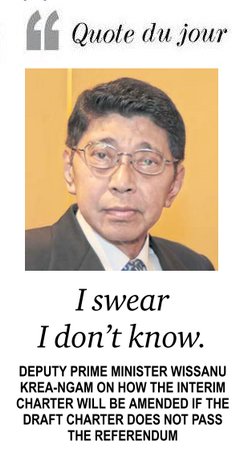 Mr Meechai said he believed most people will listen to the CDC explain the draft with good intentions, but there might be some who are dishonest and intent on stirring up trouble.

He added the CDC has set up a team to monitor social media for any inaccurate information and "dirty tricks" used to cause any misunderstanding. Some misinformation has been spread by academics, Mr Meechai said.

The CDC chairman said when the bill on holding the referendum on the draft charter is published in the Royal Gazette and becomes law, the CDC will need to study the law to see if it provides the CDC with adequate protection from any disruptions.

If the referendum law still has loopholes in terms of providing security, the CDC will propose amendments to boost security, Mr Meechai added.

The cabinet submitted the referendum bill to His Majesty the King for royal endorsement on Tuesday after it passed the National Legislative Assembly (NLA) on April 7. The NLA also voted to add an extra question to the referendum, asking the public whether the Senate should be allowed to join the House of Representatives in selecting a prime minister during a five-year transitional period after a general election.

Mr Meechai also said the CDC will work with the Interior Ministry, the Defence Ministry, the Public Health Ministry and the Social Development and Human Security Ministry to create a nationwide network of volunteers to educate the public about the draft charter, with their operation covering the village, district, and provincial levels.

The CDC also plans to explain the draft charter in venues which are the focal points of each region to ensure information reaches local residents, though it will avoid areas of high political conflict, Mr Meechai said.

Deputy Prime Minister Wissanu Krea-ngam said Thursday the government will not discuss any alternative to the draft constitution because it does not want to influence voting in the August referendum.

People should not think they have an alternative, because that could prejudice their votes, Mr Wissanu said.

Mr Wissanu also said the government will decide what steps would be taken if the charter is rejected at the referendum. In this instance, the interim charter would be amended to address the issue.

Mr Abhisit earlier complained the government had not adequately explained what would happen if the constitution failed to pass the referendum, saying if there was no information on the alternative, it would be unfair to voters.

This is because the answer to the question would say what people wanted in a third draft charter and the information would be useful if a new charter had to be formulated, Mr Wissanu said.

He said a third draft charter would likely be written based largely on past constitutions but also including drafts prepared by the current and previous CDCs.

However, Prime Minister Prayut Chan-o-cha previously hinted he would have a completely new version of the constitution drawn up.