Former prime minister Banharn Silpa-archa's conditions were still critical and he remained in the intensive care unit, according to Siriraj Hospital.

"At 3am [on Thursday], Mr Banharn had an asthma attack. His relatives gave him an inhaler but his conditions did not improve so they sent him to the hospital. He was admitted to the ICU and still needs intensive care," Prof Dr Prasit Wattanapa, dean of the Faculty of Medicine Siriraj Hospital, said in the statement issued late on Thursday. 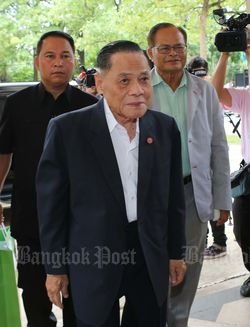 Mr Banharn was admitted to the hospital early on Thursday after he had breathing difficulties, according to his close aide Nikorn Chamnong.

Mr Nikorn, an adviser to Mr Banharn, said the Chartthaipattana Party leader has been under treatment for an allergy.

It was possible the extreme weather had caused his respiratory problem, he said.