The National Legislative Assembly is rushing through amendments that would increase the penalties under the Computer Crime Act to deal with the political crisis.

The amendments would see the penalties for violating the law increased.

The NLA voted by an overwhelming 160 to zero to forward the draft amendments on to their second reading.

One main reason cited by the cabinet to support the proposed changes was the need to update the law in order to keep up with changing forms of offences which have become ever more complicated due to evolving and advanced technologies.

The proposed amendments mainly involve Section 19 of the law which deals with penalties for offenders. (Chart of current charges and penalties below)

Under the proposed changes, sending spam or messages in a way that annoys recipients by not giving them the chance to unsubscribe or reject such information could result in a fine of up to 200,000 baht.

Offenders who upload, disseminate or forward false information over a computer network may face up to five years in jail or a maximum fine of 100,000 baht.

These penalties will apply if offenders are found guilty of handling the false information in a way that can cause damage to the country's internal, public and economic security, in a manner deemed as scaremongering, or through an act of distributing pornographic materials.

Offenders found guilty of editing photos of others in a manner that can damage their reputations or instigate hatred or embarrassment, face up to three years in jail and a maximum fine of 200,000 baht.

The draft amendments also deal with tougher punishments for providers of computer services who are found guilty of colluding with an offender of the law or providing assistance in committing electronic crimes, or being aware of any such criminal act.

Cases involving offences that are subject exclusively to fines will not need to be brought to court.

Instead, a three-member committee will be established under an order of the relevant cabinet minister to determine the fine amount.

Some NLA members raised questions over the clarity of the definition of the act of "annoying" others as stated in the draft amendments, saying people have different annoyance tolerance levels.

Other NLA members also expressed doubts over whether the offence of annoying others in this case deserves a fine as high as 200,000 baht.

Here is a summary of the violations and possible punishment under the current version of the Computer-Related Crime Act of 2007, as prepared and posted at Slideshare.net by the ACIS Professional Center. 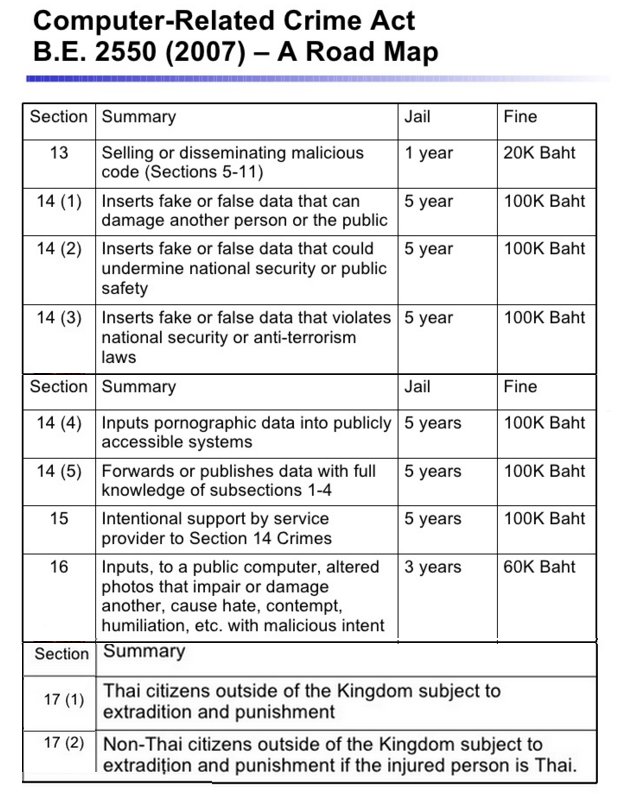