Royal Thai Army commander Gen Teerachai Nakwanich says he is convinced anti-coup elements are determined to cause public unrest, and he is determined to stop them. (Photo by Pattarapong Chatpattarasill)

Tougher steps are likely to deal with anti-coup elements, the army chief says, as the regime looks for evidence to pursue ringleaders including red-shirt leader Jatuporn Prompan and persistent critic Sombat Boon-ngamanong.

The suspects have been charged with inciting public unrest under the Criminal Code's Section 116 and breaching the Computer Crime Act for Facebook posts that can be used to instigate chaos.

As police held a press briefing last Thursday, they revealed an "anti-coup" chart showing the connections between the suspects and their alleged links to Mr Jatuporn and Sombat. Police are also gathering evidence to seek warrants for the arrest of the pair.

Gen Teerachai said the anti-coup chart was based on the suspects' statements given to police. He also warned various protest groups opposing the draft constitution, saying these groups are made up of "the same old faces".

The army chief said he will not let them do anything to stir up trouble. Asked if he will adopt harsh measures to deal with protesters, Gen Teerachai said: "Wait and see. But we will no longer use 'attitude adjustment' because it's hard to talk to them now."

Based on the investigation findings, one of the eight suspects, Natthika Worathaiyawich, was hired to operate websites for Mr Jatuporn and Mr Sombat, police said.

According to police, Ms Natthika was the administrator of several sites that were highly critical of the government and military regime, including "We Love Prayuth", "UDD Thailand" and "Red Intelligence". She had received 110,000 baht monthly from another suspect, Harit Mahaton, since March 2014 and split the money with five other suspects, who are team members, police said.

Mr Harit was identified as a content adviser for "We Love Prayuth" and "UDD Thailand" and paid 28,000 baht for his services. His contact was allegedly Chaitat Rattanajan, a ninth suspect who is currently overseas and is believed to have received instructions from another unidentified person. 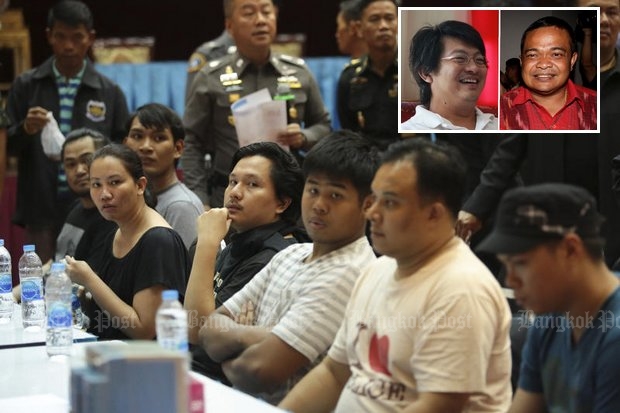 Ten people were rounded up by the military last Wednesday, but two were released shortly after being cleared of any involvement. Deputy police spokesman Krissana Pattanacharoen  talked Monday about a report that Panthongtae Shinawatra, the son of former prime minister Thaksin Shinawatra, was linked to the eight suspects.

A police source said when the police investigator submitted a request seeking the Military Court's permission to detain eight suspects, they also named Mr Panthongtae as a supporter of the suspects in the detention request.

Mr Jatuporn on Monday led a group of United Front for Democracy against Dictatorship members including Nattawut Saikuar, Weng Tojirakarn and Tida Tawornseth to the Bangkok Remand Prison to visit the eight detainees. The Military Court has denied the detainees bail as their charges carry a heavy penalty.

Speaking after the meeting, Mr Jatuporn said the charges levelled against the suspects for inciting unrest under Section 116 were unwarranted. The eight were only involved in making web pages with "political mockery" content, he said.

Mr Jatuporn also called on Prime Minister Prayut Chan-o-cha to be open to criticism as suggested by ex-premier Yingluck Shinawatra.

The prime minister is a public figure and should not be easily offended by criticism or mockery, Mr Jatuporn said. He also dismissed claims of Mr Panthongtae's links to the eight suspects as groundless.

Coup critic Mr Sombat said Monday he did not think pages mocking the prime minister would have an impact on national security. He denied any links to the so-called anti-coup chart.