MR Sukhumbhand Paribatra speaks to supporters at City Hall Wednesday, insisting he will not quit as Bangkok governor over allegations of irregularities in the 39­million­baht New Year light show. (Photos by Apichart Jinakul)

Bangkok governor Sukhumbhand Paribatra insisted Wednesday he will not resign and would file a lawsuit against those accusing him of wrongdoing in City Hall's 39-million-baht New Year light show scandal.

His statement came after the state auditor named him among those allegedly involved in irregularities as part of the Bangkok Metropolitan Administration's (BMA) light show.

"I will continue to work and, after my term ends, I will take a rest," MR Sukhumbhand said, responding to former Democrat MP Vilas Chanpitaksa's call for the regime to use its power under Section 44 of the interim charter to suspend him from his position.

Mr Vilas earlier filed a complaint against the BMA with the Office of the Auditor-General (OAG), asking it look into the light show project.

MR Sukhumbhand was speaking at a news briefing one day after Auditor-General Pisit Leelavachiropas revealed that the State Audit Commission (SAC), which launched a probe into the project, found evidence leading it to believe that there was price collusion in the project bidding process. The light show was held at Lan Khon Muang, the square in front of City Hall's offices on Din So Road, between Dec 30 and Jan 30.

MR Sukhumbhand was among nine BMA officials who the SAC decided to recommend legal action against. The commission will forward its findings to the National Anti-Corruption Commission (NACC) for further action.

"I would like to say that the SAC resolution is only the start of more procedures which have to be pursued. No one has been found guilty according to the law," said the governor.

The governor is also threatening to sue anyone who alleges he committed any crime in relation to the light show.

"Anyone who writes something about it should be aware of the laws. I will not give in to anyone. Whoever says I am guilty, I will sue them."

MR Sukhumbhand said he and his legal team are discussing what should be done next.

He said the light display was part of the BMA's policy to bring happiness to Bangkok. The event aimed to promote tourism and generate income for small businesses when tourism and the local economy were suffering.

Responding to Mr Pisit's comment that the BMA had diverted an emergency budget to fund the display, MR Sukhumbhand said it had been necessary as the BMA's tourism promotion budget was not sufficient.

Based on the 2016 fiscal-year budget, the BMA's budget for tourism promotion was reduced to 50 million baht from the initial request of 241 million baht, he said.

"Over the past seven years, the BMA has worked in a transparent manner and complied with laws and regulations," he said. "I have never ordered anyone to break the law."

He said the project succeeded in drawing more than 1.6 million spectators through the month-long display, with more than 10 million baht spent by visitors.

He insisted the light display was a good way to promote tourism, adding the OAG should have warned about the budget earlier.

"The BMA cooperated with the OAG, even when the display had not been completed. City Hall stands ready to give information required by the OAG." 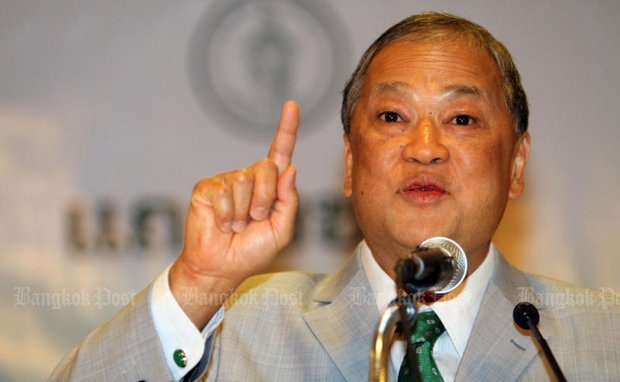 MR Sukhumbhand: One more thing, 'Whoever says I am guilty, I will sue them'.

Responding to OAG allegations that he failed to cooperate by refusing to meet officials to discuss the case, MR Sukhumbhand said it was normal practice to send his deputies who supervised the project to speak on his behalf as they were better informed.

He said he was surprised that the OAG had decided to move against the light project even before it had been completed.

"I do not know whether this treatment would be upheld for further cases or only with the BMA," said MR Sukhumbhand. "I want to know if the OAG will apply such practices with other agencies."

Meanwhile, Mr Vilas noted that Prime Minister Prayut Chan-o-cha affirmed he would punish officials involved in malfeasance, with some already suspended from duty.

Deputy Prime Minister Wissanu Krea-ngam said the OAG and SAC had no authority to punish MR Sukhumbhand, and should send their recommendations to the NACC.

The governor can keep his position until the NACC clears up the allegations, he said.

NACC chairman Pol Gen Watcharapol Prasarnrajakit said if the OAG sends the issue to the NACC, the anti-graft agency will set up a fact-finding committee.