Police and soldiers seen searching the home of Worachai Hema in Samut Prakan province on Thursday morning. The media was refused entry. (Photo by Sutthiwit Chayutworakan)

SAMUT PRAKAN - Teams of soldiers and police raided the homes of several politicians in the Samut Prakan area, seizing licensed firearms, radios, CDs, a notebook computer and other items for closer examination on Thursday.

The searches were made under order No.13/2016 of the National Council for Peace and Order, authorising nationwide action against people wielding "dark influence".

A total of 12 homes were searched, according to media reports.

First, about 50 soldiers and police surrounded the home of Worachai Hema in Muang district of Samut Prakan. The former Pheu Thai MP was not at home, according to media reports.

The soldiers, from the 2nd and 9th Infantry regiments, along with Special Branch police and  two sniffing dogs, were deployed around Mr Worachai's house in tambon Bang Muang about 6.20am.

People in the house were not allowed to leave the premises or use the telephone. Security guards at the Le Neo Housing Estate were ordered to bar reporters from entering the cordoned off area.

Mr Worachai was not home as he had travelled to the North several days ago, the soldiers were told.

Speaking to reporters on the telephone, Mr Worachai confirmed the raid occurred shortly after 6am.  He said the soldiers broke into his bedroom and ransacked it.

Mr Worachai said he believed the soldiers had intended to take him into custody. The NCPO should have ordered him to report to it, instead of carrying out a search like this.

The former Pheu Thai MP was taken into military custody in March for an attitude adjustment session and then released.

Mr Pracha was there when the military and police arrived at his house in tambon Bang Nam Phueng in Phra Pradaeng district about 9am.

Seized during the search were 11 firearms of various types, handguns and rifles, all of them properly registered but taken for examination, and a communication radio.

About the same time, military and police searched the house of Sombat Thongyoi in tambon Bang Kaew, Bang Phli district.

The team seized many items in the house for examination.  They included two BB guns, an ID card for a security guard of the United Front for Democracy against Dictatorship (UDD), four CDs on UDD rallies, three communication radios, a notebook computer of Noppakao Kongsuwan, one of the eight Facebook users suspected of violating the Computer Crime Act, and two mobile phones. 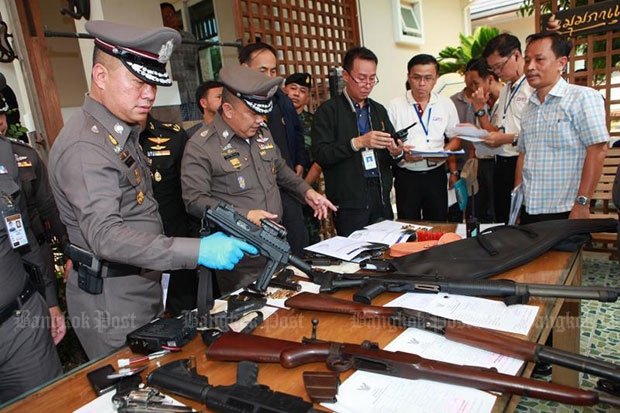 Police show weapons seized from the raid of houses in Samut Prakan. (Photo by Somchai Poomlard)