Prawit says election may be scrapped

Prime Minister Prayut Chan-o-cha has had a fresh look at this "5 Rivers, 1 Roadmap" document, and it seems that if voters reject his draft constitution on Aug 7, those 2017 elections can't happen after all. (Photo by Thiti Wannamontha)

The military regime has indicated the general election scheduled for next year may have to be scrapped if the draft constitution is shot down in the Aug 7 referendum.

Deputy Prime Minister Prawit Wongsuwon Tuesday referred to Prime Minister Prayut Chan-o-cha's remark that if the draft charter fails to pass the referendum he would have to stay on to make sure there was a new constitution and a general election. The prime minister did not give a time frame.

In the event the draft charter prepared by the Constitution Drafting Committee chaired by Meechai Ruchupan is voted down in the referendum, the prime minister will use his power as the chief of the National Council for Peace and Order (NCPO) to set up a new committee to draw up a new charter, Gen Prawit said.

On Monday, Gen Prayut said the charter-drafting process will go back to square one if the draft fails to pass the referendum.

"But will I have to resign? I am working for the sake of the country. I am not threatening to stay on if the draft charter is rejected," the prime minister added.

However, the 2014 interim constitution would have to amended first to allow the creation of a new charter-drafting panel, said Gen Prawit, who is also defence minister and deputy chairman of the NCPO.

There was no telling whether and for how long the NCPO's roadmap for the elections would have to be extended if the draft failed to pass the referendum, and the NCPO would have to meet to decide on this matter.

Gen Prawit added the draft charters prepared by both the Meechai panel and the previous panel led by Borwornsak Uwanno, as well as the past constitutions of 1997 and 2007 could be brought together if authorities needed to create a new draft constitution.

"We must come up with the best charter," Gen Prawit said.

Asked whether there would be a general election by September 2017, Gen Prawit declined to answer directly, only saying: "We will try to follow the existing roadmap."

Asked if the NCPO's stance had changed as it could not now guarantee there would be a general election in 2017, Gen Prawit said he was only speaking about a possible back-up plan in the event of the draft charter being voted down, and it was not known how long each step, including the amendment of the interim charter, would take.

But Gen Prawit said he personally believed the draft charter would pass the referendum, considering the people's acceptance of soldiers who went out to help them during times of flooding or drought. "If the people vote in support of the charter, it is not because they are afraid of soldiers. The people love them because they have nothing to do with politics. Also, the NCPO's overall performance is satisfactory, particularly in the economic field," Gen Prawit said.

He had assigned security officials to find ways to ease restrictions to allow political parties to air their opinions. 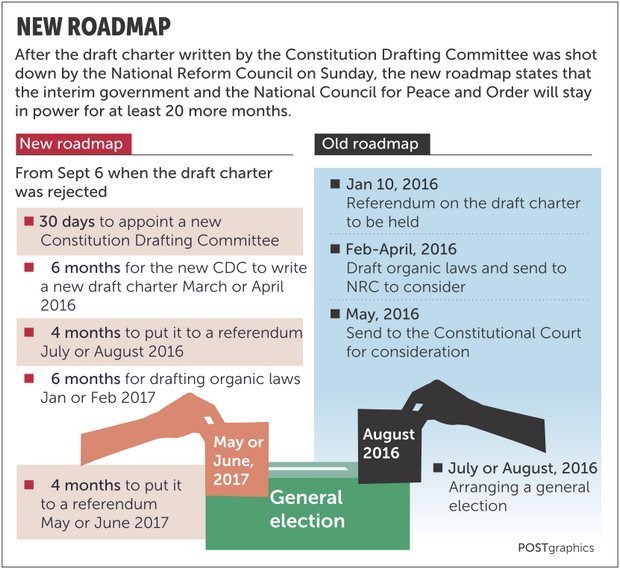 This was the revised roadmap given last September. Now, though, it seems there are going to be still more revisions and time slippages.

Deputy Prime Minister Wissanu Krea-ngam, who is responsible for legal affairs, had been assigned to work with the Election Commission to organise forums for all political parties to express their opinions. "The NCPO does not change its stance. We only want to provide an outlet for them to speak out," Gen Prawit said.

Regarding a report that anti-coup elements plan to hold gatherings in a symbolic gesture against the NCPO on the second anniversary of the May 22, 2014 coup, Gen Prawit said the law would be enforced to maintain order.