The father of one of the two "Facebook 8" suspects who remains in jail has petitioned the United Nations for help with the temporary release of his son and the other detained person.

Krit Mahaton, whose son Harit has been detained since April 27, submitted a letter to the Office of the High Commissioner for Human Rights in Bangkok on Wednesday.

The letter explained the charges against Mr Harit and the other detained suspect, Natthika Worathaiyawich.

Mr Krit asked the UNOHCR to urge the Thai government to allow the pair bail and try them in the Criminal Court.

The Facebook 8 will be tried in the Bangkok Military Court because the charges involve national security.

"My son has no intention to escape. Besides, all evidence against him came from officials so he has no way of meddling with it," Mr Krit said.

Like the other six administrators of a Facebook page mocking the prime minister, Mr Harit and Ms Natthika were charged with violating the 2007 Computer Crime Act and with inciting unrest under Section 116 of the Criminal Code (see chart).

Unlike them, they were charged with lese majeste based on one of their Facebook chats.

The military court allowed bailed for the six administrators on May 11 but the pair were detained further because they also faced lese majeste charges. 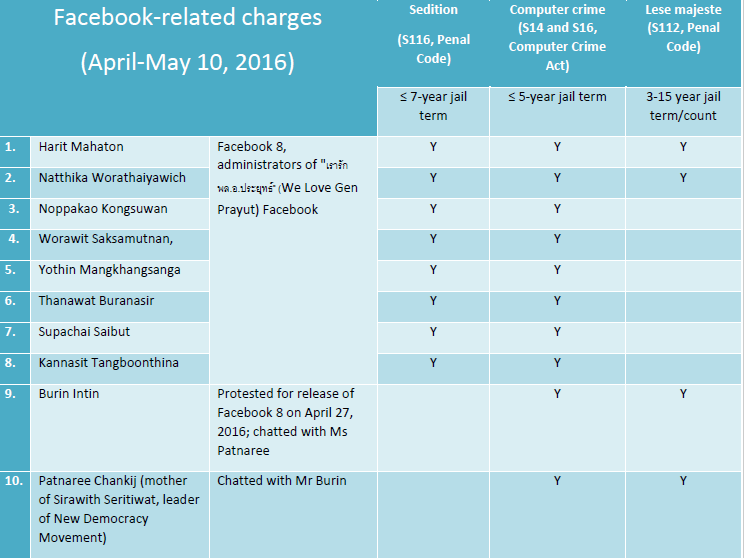