The country's long-term water management projects might need to be adjusted for faster and more effective water distribution over the next year, Prime Minister Prayut Chan-o-cha says.

During his Wednesday tour of the Lam Phra Ploeng reservoir in Nakhon Ratchasima, Gen Prayut was presented with a plan to allocate water from the Moon River basin -- of which Nakhon Ratchasima is a major tributary -- to several other areas in dire need of assistance.

Gen Prayut said he was happy to hear about progress in overall water management and budget spending for the cause.

However, he insisted water shortages required sustained efforts to tackle as the government has diverted a large amount of money to fight the drought.

The government has spent almost one-third of the national budget dealing with issues in the farm sector, Gen Prayut said.

He said the government has earmarked a portion of the budget for a water management blueprint governing the river basin, essential for the Northeast's water grid. However, the premier said he felt the funds may not be enough.

Long-term water management projects may have to be partially modified for quick and effective distribution of water to target areas so residents will benefit from the plans, he said.

"We have to conserve water for farming, consumption and protecting the ecology," the prime minister said.

Help from state agencies was needed to process and market agricultural produce grown using the water so the entire supply chain will be managed efficiently, he said.

"The government will step in to help with additional support where needed and the issues will be brought to the cabinet's attention," he said.

"However, the help will be prioritised. [The projects] which benefit the people the most will be carried out first," the premier added. 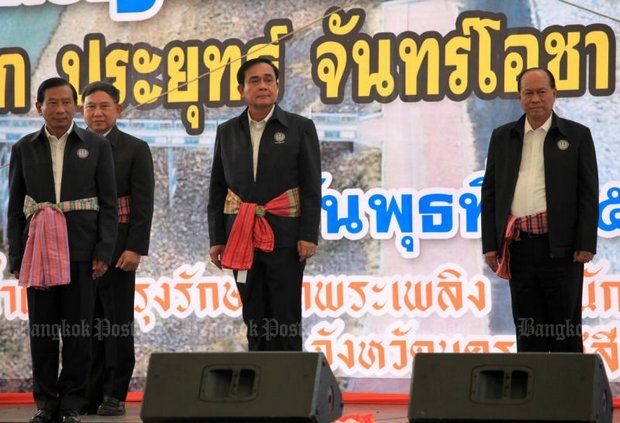 Gen Chatchai Sarikulya said the water situation in the country's dams has generally improved with a combined 200 million cubic metres of water gained.

However, the Bhumibol dam in Tak has reported a zero water increase as the rain fell mostly in the East and Northeast.

The North, where the Bhumibol and the Sirikit dams in Uttaradit are located, has recorded low precipitation in the past week.

Currently, the four main dams -- the Bhumibol, the Sirikit, the Kwae Noi in Phitsanulok and the Pasak Jolasid in Lop Buri -- have combined usable water of 1.4 billion cubic metres.

For this year, no dams will release water for irrigation of the in-season rice crop grown during the rainy season. The paddy will have to rely solely on the rain water and water from natural sources.

The country is forecast to receive more rainfall than last year, with two storms possibly sweeping through from July to October, Gen Chatchai said, referring to information from the Meteorological Department.

The emphasis now was on increasing the water stored in the major dams to ensure enough supply for use in the summer season next year, he said.

Thai Bankers' Association president Predee Daochai is tipped to be the next finance minister, according to Thai media.

India locks down 125 million as virus surges across globe

PATNA, India: More than 125 million people in India began a new lockdown on Thursday as authorities worldwide scramble to get a handle on a surge in coronavirus cases that continues to wreak havoc from America to Asia.