Executives and team members of GEP (Myanmar) Co. Ltd. in cooperation with the three founding organizations and chief investors in the project, namely; Scan Inter Plc. (SCN), East Coast Furnitech Plc. (ECF) and META Corporation Plc. (META), engaged in the opening ceremony of Minbu 220MWDC Solar Power Plant Phase 1 (50 MWDC) in the Republic of the Union of Myanmar, which was honored by the presence of Mrs. Aung San Suu Kyi, State Counsellor of Myanmar, serving as the official chair of the proceedings initiating along with the Minister of Home Affairs, Deputy Minister of Electricity and Energy, Minister of Border Affairs, Minister of Office of Union Government, and Minister of Natural Resources and Environmental Conservation, Chief Minister of Magway Region. 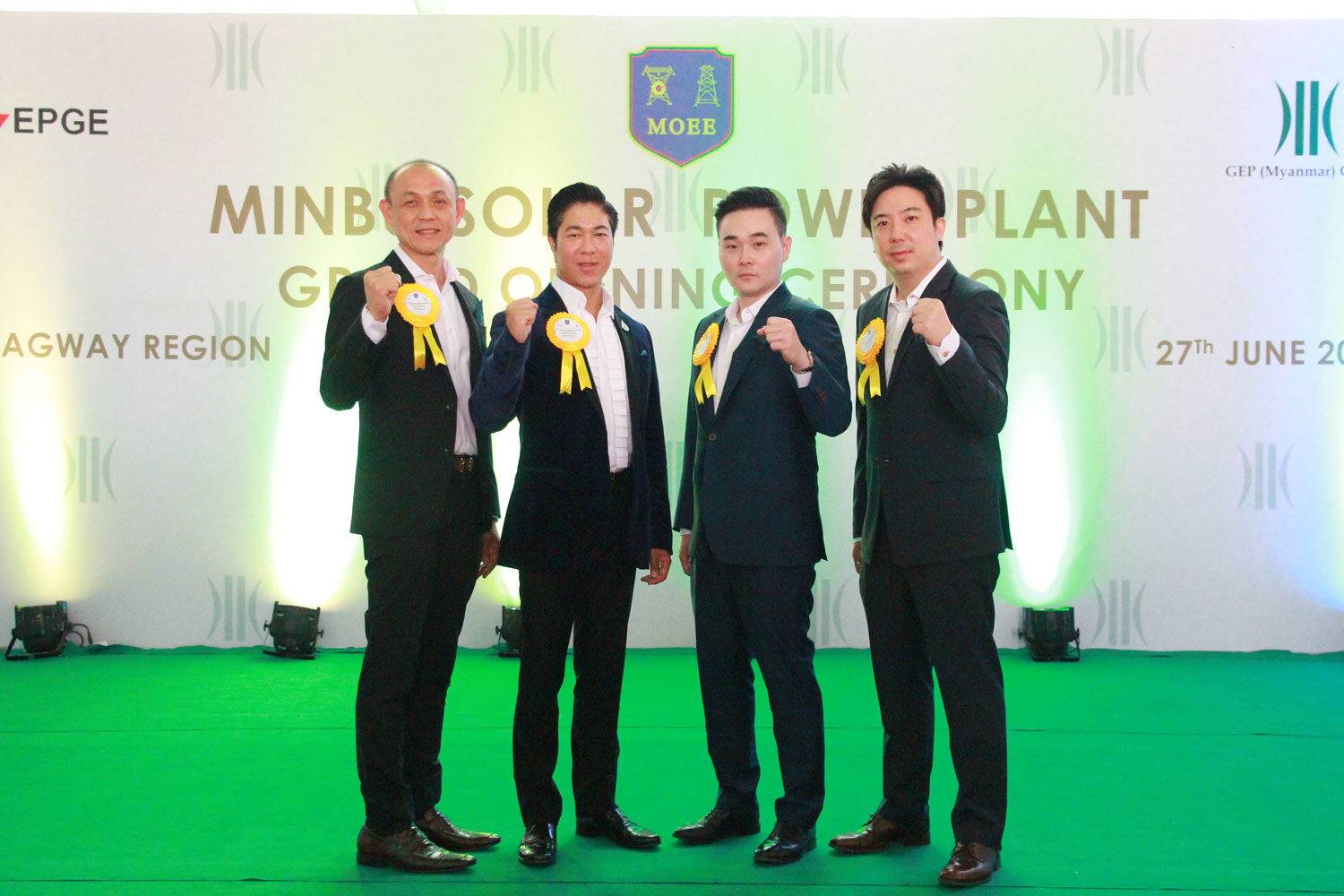 The ceremony marked an auspicious start for Minbu Solar Power Plant, which was designed to be efficient and conform to international standards.  The first phase of the project will result in a power generation capacity of 50 MWDC from a final target of 220MWDC and will cover an 836-acre plot (2,115 Rai) leased from the government and a private Myanmar company.  Electricity from the plant will be sold to the Electric Power Generation Enterprise (EPGE) under the Ministry of Electricity and Energy to satisfy up to 350,000,000 kWh of power demand per year, equivalent to power usage by 200,000 households.  The project’s success will push Myanmar forward and serve as both a new paradigm and a point of pride for the nation.

The Minbu Power Plant is a triumph of both the Myanmar people and Thai investors who supported the establishment of its Phase 1.  The facility will be a model solar energy plant and play a key role in the development of Myanmar life quality, education, careers, health and much more.

Mr. Aung Thiha, CEO of Green Earth Power (Thailand) Co.Ltd. and GEP (Myanmar) Co., Ltd or GEP, remarked “We are proud and elated to have been behind this success and to be a part of developing Myanmar so that it is in step with other nations.  This project received the full support of the government and with acknowledgement that much of Myanmar’s people are still in need of power, this solar power plant is sure to better the lives of many.  The success of this endeavor will also guarantee that GEP will be able to continue to undertake development projects into the future.  As a citizen of Myanmar myself and as a pioneer of clean energy in the country, I am immensely grateful for all the support this project has received from investors, financial institutions and our partners in Thailand and other countries.  You have all helped to bring more power to the Myanmar people and underlined that we are a nation of vision and modernity”.

Dr. Littee Kitpipit, CEO of Scan Inter Plc. or SCN, “We are ecstatic about the success of Minbu Power Plant as before we invested in the project we formed a team to thoroughly study its details and were assured of its strong potential and definite growth.  Even though  this phase is just the beginning for the project, we are confident each phase will be just as successful because the team involved in this endeavor is highly experienced and works well together.  Following the COD, SCN will be increasing its shareholding in GEP to 40 percent to increase its profit share.  We will become GEP’s largest shareholder because we have assessed that the return on investment will be worthwhile and are already looking beyond Myanmar to other countries in the region where investment in the energy sector will lead to growth opportunities.  Presently, we are studying investment in Vietnam and other countries nearby,” said Dr.Littee Kitpipit, CEO of Scan Inter Plc. or SCN, a leader in renewable energy and alternative energy automobiles.

Mr. Arak Suksawad, CEO of East Coast Furnitech Plc. or ECF, revealed that his company invested in 20 percent of the 220 220MWDC Minbu Solar Power Plant in Myanmar through a subsidiary of ECF Power Co. Ltd. with the expectation that phase 1 COD which is its first 50 MWDC, would occur within the second or third quarter and result in an immediate profit share in the latter half of the year and that COD for phase 2, 3 and 4 would follow at a regular pace within every 360 days of each phase’s completion.  ECF is to see profit across all the alternative energy endeavors it invested in this year and has already begun to see a share of profit from its 7.5MW southern biomass power plant.  Moreover, the company has planned to significantly expand its energy business and is studying the possibility of several overseas alternative energy projects, which have proven beneficial to its returns as well as its sustainable growth.  Mr. Arak stated his company is ready to study any alternative energy projects that have potential and consider investment. 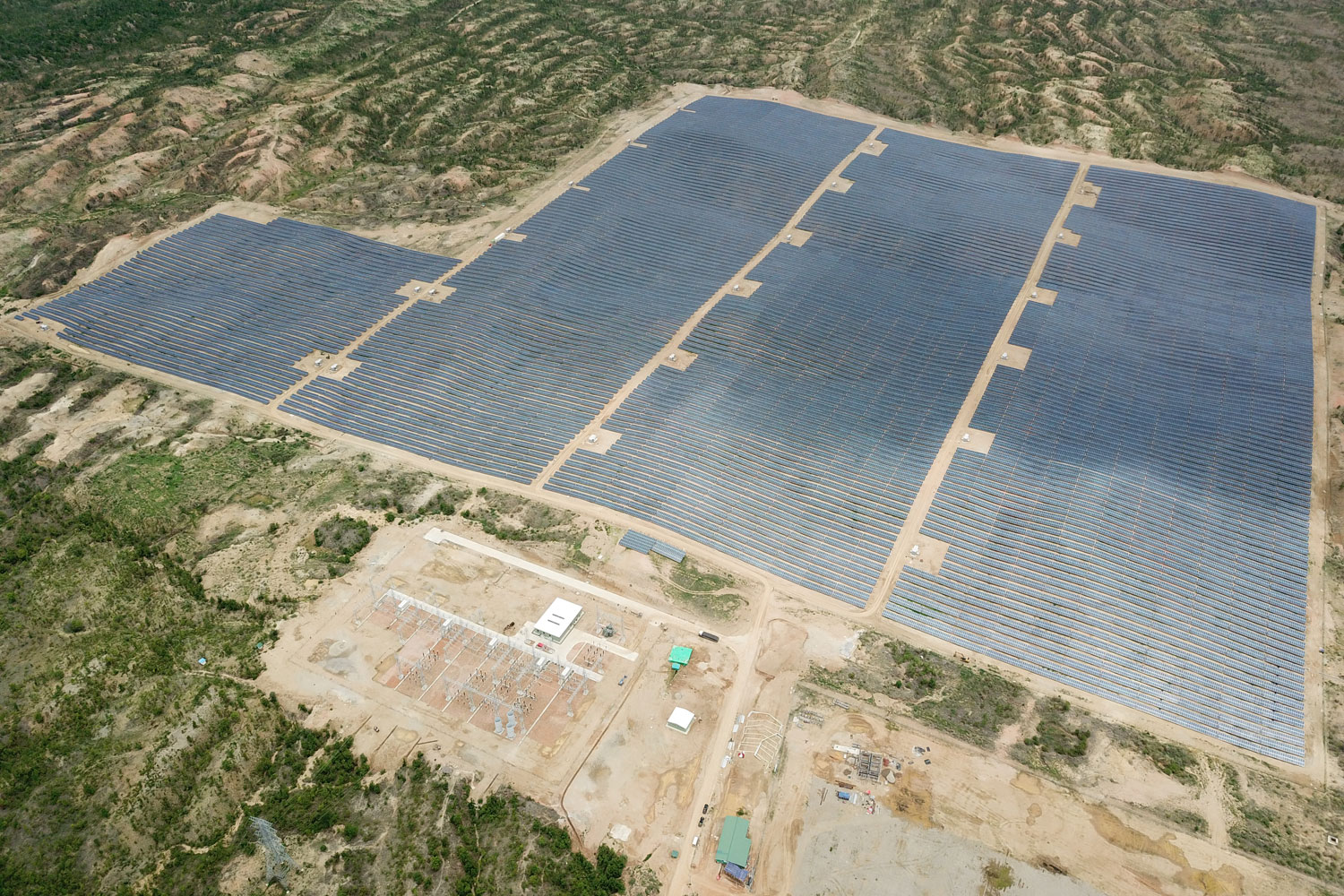 Mr. Supasit Pokinjaruras, CEO of META Corporation PLC. or META, “As the contractor and developer behind Minbu Solar Power Plant, today marks the milestone that we are the first to successfully bring solar and alternative energy to Myanmar.  Minbu Power Plant is the first and largest solar power plant in Myanmar and it is an affirmation of our operations and ability to take on major contracts both domestically, and internationally.  We began working on this project in 2016 by studying and comprehending each of its facets, from risks and work processes in Myanmar, to providing knowledge and garnering support from state agencies through the maintaining of good relations.  We are now closer to Myanmar and have risen to the challenge of expanding in the construction industry here.  Our expertise has increased our access to projects in Myanmar and provided us greater opportunities.  We intend to continue to develop the network in power industry and related aspects here as we know that only 40 percent of Myanmar currently has access to electricity. The establishment of power plants will greatly benefit the locals here with Minbu sure to see development, community growth, as well as creating new jobs and opportunities.  The plant’s success will result in two streams of profit for META, from the sale of power and from construction with profits expected within 2019.  We are to commence with phases 2, 3 and 4 immediately as planned,” said Mr. Supasit Pokinjaruras, CEO of META Corporation PLC. or META, a leading construction contractor and developer of renewable energy projects.