The Hong Kong Trade Development Council (HKTDC) has been working to facilitate closer business and investment collaboration between Thailand, Mainland China and Hong Kong through organising missions, high-level exchanges and keynote events, including the Belt and Road Summit which concluded on 12 September, with Thai business leaders and project owners sharing their insights on the opportunities driven by the growing cooperation along the Belt and Road.

The fourth Belt and Road Summit, jointly organised by the Government of the Hong Kong Special Administrative Region (HKSAR) and the HKTDC, welcomed some 5,000 participants from more than 60 countries and regions, including over 500 from the ASEAN (Association of Southeast Asian Nations) region from 11-12 September in Hong Kong.

Under the theme “Creating and Realising Opportunities”, the summit brought together government and business leaders from around the world to discuss collaboration opportunities presented by the Belt and Road Initiative for different sectors. One-to-one business matching meetings, investment project pitching sessions, exhibition zones and a Global Investment Zone connected participants to a variety of projects, services, and business and investment opportunities to foster concrete cooperation. 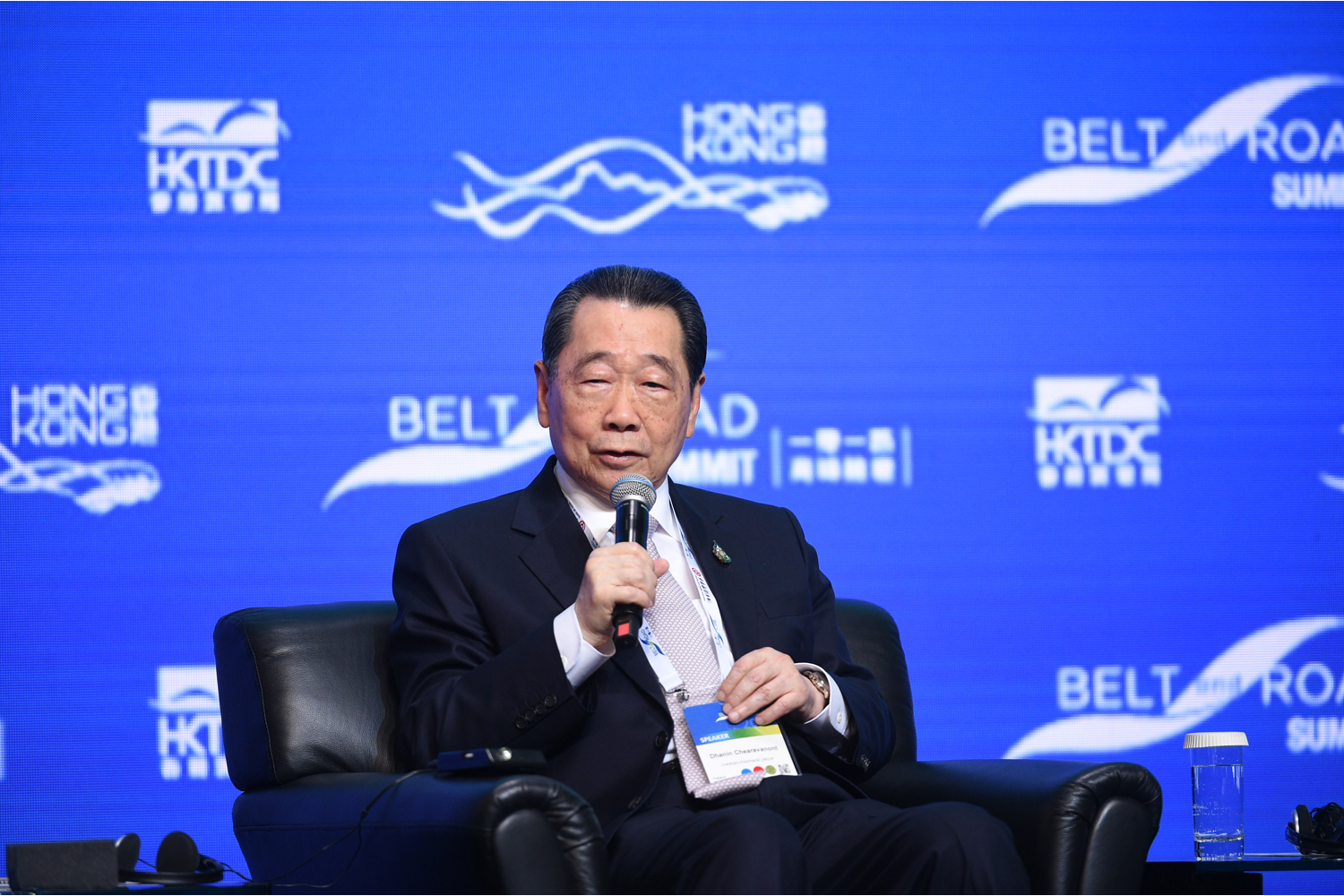 At the plenary session entitled “Investing for Value – Making Belt and Road Projects Viable”, Dhanin Chearavanont, Senior Chairman of Charoen Pokphand Group, said: “I have immense confidence in China’s development and I started investing in the country 40 years ago. Today China puts forward the Belt and Road Initiative, setting a clear direction towards international cooperation and mutual benefits. Thailand, in its participation in the Belt and Road Initiative, presents ample opportunities through development plans such as the EEC (Eastern Economic Corridor), which is inspired by the success of China’s special economic zones and aims at attracting talent to boost Thailand’s technology and innovation capacity.”

Mr Dhanin met with HKTDC Chairman Dr Peter K N Lam in Bangkok during the Hong Kong business mission to Thailand organised by the HKTDC on 24-26 July. The delegation, comprising 20 Hong Kong business representatives, met with Thai government and business leaders to discuss cooperation opportunities in trade, manufacturing, investment and services under the Belt and Road Initiative and the Thailand 4.0 economic programme.

During the mission, the delegation was received by Deputy Prime Minister of Thailand Somkid Jatusripitak. The mission examined ways that Thailand’s EEC project and China’s Guangdong-Hong Kong-Macao Greater Bay Area development plan can be aligned to strengthen connections between Mainland China, Hong Kong and ASEAN countries. Meetings were held with the Eastern Economic Corridor Office (EECO), the Board of Investment of Thailand (BOI), and the Industrial Estate Authority of Thailand (IEAT) to learn about the latest developments in Thailand as well as the investment and tax incentives offered in the EEC and various industrial estates.

Besides Mr Dhanin, the delegation met Thai business leaders including Vikrom Kromadit, Chairman of Amata Group, and Kavin Kanjanapas, CEO and Managing Director of BTS Group. The meetings explored how Hong Kong, through its expertise in financing and professional services, can connect Mainland Chinese and international investors and support the urban development of the EEC and Bangkok through such projects as high-speed railways, industrial parks and smart cities.

HKTDC Chairman Dr Peter K N Lam said: “Thailand has long been an important ASEAN trading partner for Hong Kong. We learnt from our mission that the Thai government’s ‘Thailand 4.0’ blueprint and EEC project complement the Belt and Road Initiative and Guangdong-Hong Kong-Macao Greater Bay Area development plan, and that Thailand welcomes international and mainland investors while also bringing new opportunities for Hong Kong companies, especially in areas related to infrastructure, technology and industrial parks. Hong Kong enterprises are keen to participate in developments that can help them diversify their production bases and overseas markets.”

The HKTDC has been organising investment and partnership missions to Thailand to help Hong Kong and Mainland Chinese businesses explore and capitalise on infrastructure collaboration opportunities in the country. High-level discussions were held and concrete agreements were reached during the Hong Kong-Shanghai Joint Infrastructure Investment Mission to Thailand in May 2017, including meetings with Thai Prime Minister General Prayut Chan-o-cha at Government House and discussions with senior government officials at the “Thailand-Hong Kong-Shanghai Strategic Partnership on One Belt One Road” seminar organised by the Thai government, during which a memorandum of understanding (MoU) was signed between the Eastern Economic Corridor Office and the HKTDC. 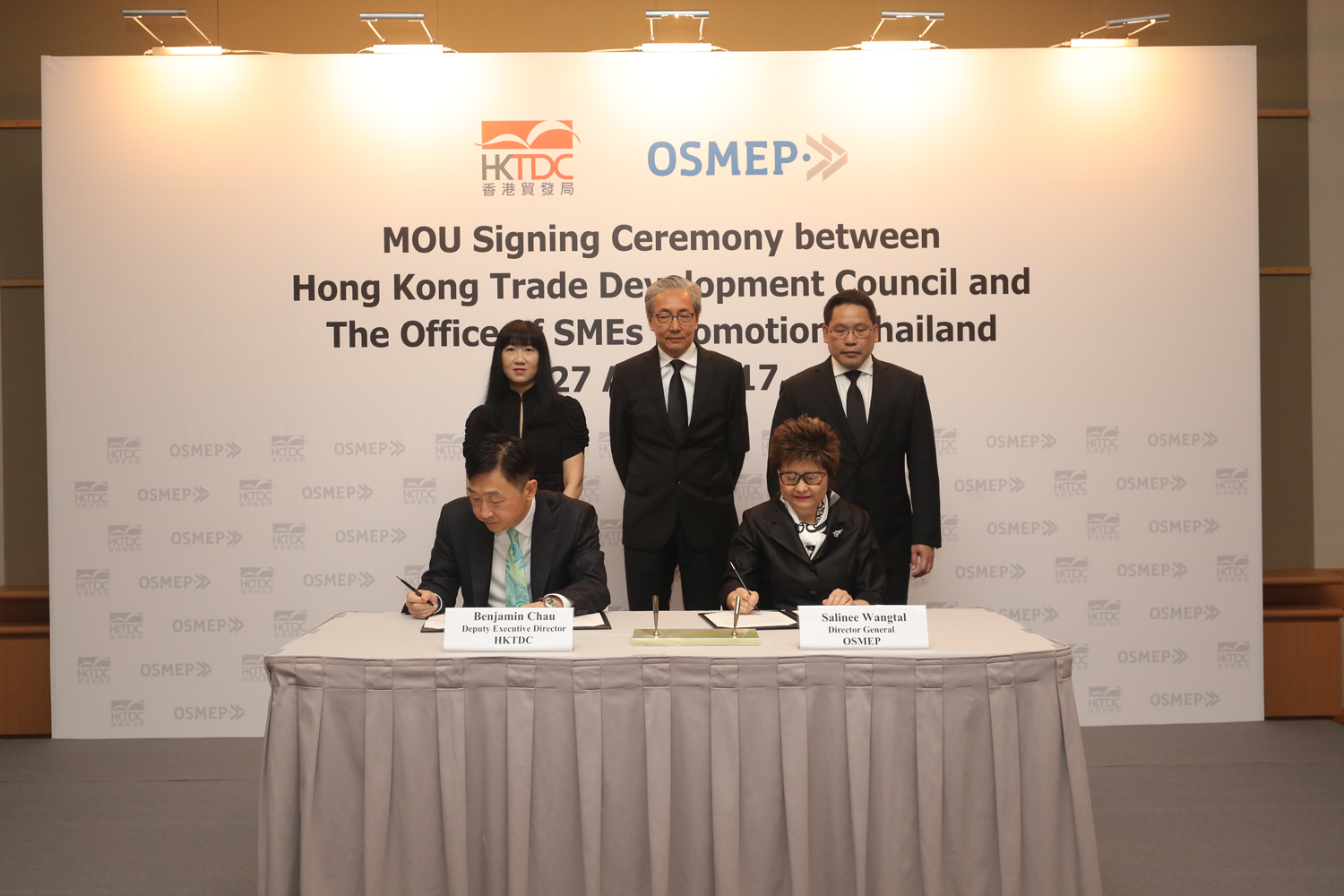 Two MoUs were signed following a year of negotiation after the mission: Hong Kong’s CLP and Amata Group signed an MoU at last year’s Belt and Road Summit to explore the feasibility of building a floating solar farm in Amata City Chonburi Industrial Estate located in the EEC: Hong Kong’s energy and mobility infrastructure specialist Kum Shing Group, which also participated in the business mission to Thailand in 2017, signed an MoU with Thailand in 2018 to provide advisory services to improve the stability of power supply in Bangkok, marking the first time for a Hong Kong company to provide consulting services to a Thai state enterprise in the power and energy sector.

Also at the Belt and Road Summit 2018, Hong Kong-based Ho & Partners Architects (hpa) and Thailand’s leading developer Life & Living reached an agreement in which hpa was appointed as the project lead to design and develop Asia’s first carbon-positive smart city project in Thailand’s Sriracha Creative District located at the heart of the EEC. Earlier, at the second Belt and Road Summit in 2017, Hong Kong’s Insight Robotics signed an MoU with Thai conglomerate Loxley to introduce its robotic wildfire-detection system to Thailand under Thailand 4.0.

G2G and G2B partnership in trade and investment

Promoting government-to-government (G2G) and government-to-business (G2B) cooperation in trade and investment between Thailand and Hong Kong has been a priority of the HKTDC. A number of MoUs were signed between the HKTDC and Thai government agencies, including the Board of Investment (BOI), Department of Industrial Promotion (DIP), Department of International Trade Promotion (DITP), Eastern Economic Corridor Office (EECO), and Office of Small and Medium Enterprises Promotion (OSMEP), to foster bilateral trade and investment, small- and medium-sized enterprise development, and economic cooperation between the two places.

With the growing importance of start-ups as a new engine of economic growth in Thailand and Hong Kong, the HKTDC and InnoSpace Thailand signed an MoU to develop a collaborative framework of innovation and start-up development in the two places. The HKTDC also signed MoUs with Charoen Pokphand Group, Bangkok Bank, Export-Import Bank of Thailand, and Siam Commercial Bank to strengthen bilateral ties with frequent business exchanges. Thailand is one of Hong Kong’s most important trading partners in the ASEAN region. Last year, Hong Kong’s exports to Thailand were valued at HK$60.6 billion, up 12% from the year before. With the commitments made by the two economies under the Hong Kong-ASEAN Free Trade Agreement and related Investment Agreement coming into force in June, trade and investment between Hong Kong and Thailand have been given a further boost through enhanced legal protection and better market access. Mainland China, being Thailand’s second-largest export market and largest import origin, is currently Thailand’s largest trading partner.