Dr. Rak Vorrakitpokatorn, President of Export-Import Bank of Thailand (EXIM Thailand), announced EXIM Thailand’s role and policy guideline upon his appointment as EXIM Thailand President since the beginning of April 2021. He said Thai economy has been on a slow recovering trend after last year’s record contraction since the Tom Yum Kung crisis. Domestic demand has remained vulnerable while tourism has shown no sign of recovery in the short run. A short-term hope has thus been placed on export. However, Thai economic and export growth prospects have still been hindered by several prevailing structural problems. As evident over the past decade, Thailand’s average GDP growth has been 2%, compared with global average GDP growth of 3% and that of neighboring Vietnam of as high as 6%. This has been in line with Thailand’s average export growth of 2%, which is lower than global average export growth of 3% and that of Vietnam of as high as 15%.

Moreover, Thailand has been faced with structural “controversies” of entrepreneurs. Although there are as high as 3.1 million SMEs or 99.5% of the entire system, large enterprises which are in the number of only around 15,000 or 0.5% of the entire system have substantially contributed to almost 60% of the GDP. As regards average GDP per enterprise, large enterprises have played a more significant role on the economy than SMEs by 350 times. This has indicated that, though in a large number, SMEs have yet to materially propel the economy. Besides, most SMEs still do businesses domestically. SME exporters account for less than 1% of total SMEs, and such proportion has been unchanged for the past several years. SMEs at large have thus encountered fierce competition and restrictions domestically. This has accordingly disabled them to fully grow and perform as a significant economic engine.

EXIM Thailand President said that Thai economy and export are like a car that “gets stuck” and needs a powerful driving force to move forward in various dimensions, as follows: (1) Investment: Private sector investment to GDP was 16.6% in 2020, down from 18.7% in 2010. (2) Development of innovations: Research & Development (R&D) value to GDP was only 1% in 2018, compared with South Korea’s 4.5% and Taiwan’s 3.4%. Hence, Thai export has still focused on creating value through volume rather than pricing. (3) Linkage with new global supply chain in line with megatrend. (4) Building of new exporters: Especially for SMEs, which are a foundation of the country, they should be developed to be economic warriors that are small but beautiful having immunity against crises and being a new driver of economic growth. Moreover, Thai economy and export have been pressured by multi-faceted disruption waves, such as technological disruption, outbreak of COVID-19, trade wars, and international conflicts. If no accelerated remedy or improvement is made, Thai economy may be stalled or move forward slowly.

Dr. Rak pointed out that it is time for EXIM Thailand to perform as a “new driving engine” for Thailand’s national development under the dual-track policy highlighting its role of “Thailand Development Bank” along with that of “One Stop Trading Facilitator for SMEs.”

1.Accelerated “renovation” and “building” of Thai industries toward future growth

2.Accelerated “building” of Thai exporters and investors from small to medium and large ones that will lead to a strong supply chain of Thai export sector in linkage with domestic and international investments

3.Accelerated “enhancement” of Thai exporters and investors’ competitive potential in both principal markets and new frontiers on a balanced basis

EXIM Thailand President further said that the Bank needs to be positioned in an attractive manner to ensure it can grow and be able to support the country’s developments. It should start from assisting Thai investors that have good potential in winning contracts overseas in conjunction with expanding investment projects domestically. This aims to boost labor employment together with industrial development that can weather various limitations by developing innovations or production processes in response to demand of new generation consumers whose behaviors are changeable rapidly. Meanwhile, EXIM Thailand will take care of small entrepreneurs so that they can carry on their international trade and investment more conveniently, manage associated risks, and access fresh business opportunities. These efforts should help foster Thai export and investment as well as establish links of Thai supply chain with global supply chain in the New Normal context which gives high priority to business operation on a sustainable basis.

“I am fully determined to perform my duty as a development banker of the new era to drive EXIM Thailand’s transformation so that it is more resilient to risks and serve as a mechanism for Thai entrepreneurs, SMEs in particular, to be adaptable in the transition to the new business world. This new journey of EXIM Thailand has a clear goal to ‘Dream Big’ toward being Thailand Development Bank that expands to cover new frontiers while not neglecting small players like SMEs because all sectors are part of Thailand’s national development,” added Dr. Rak. 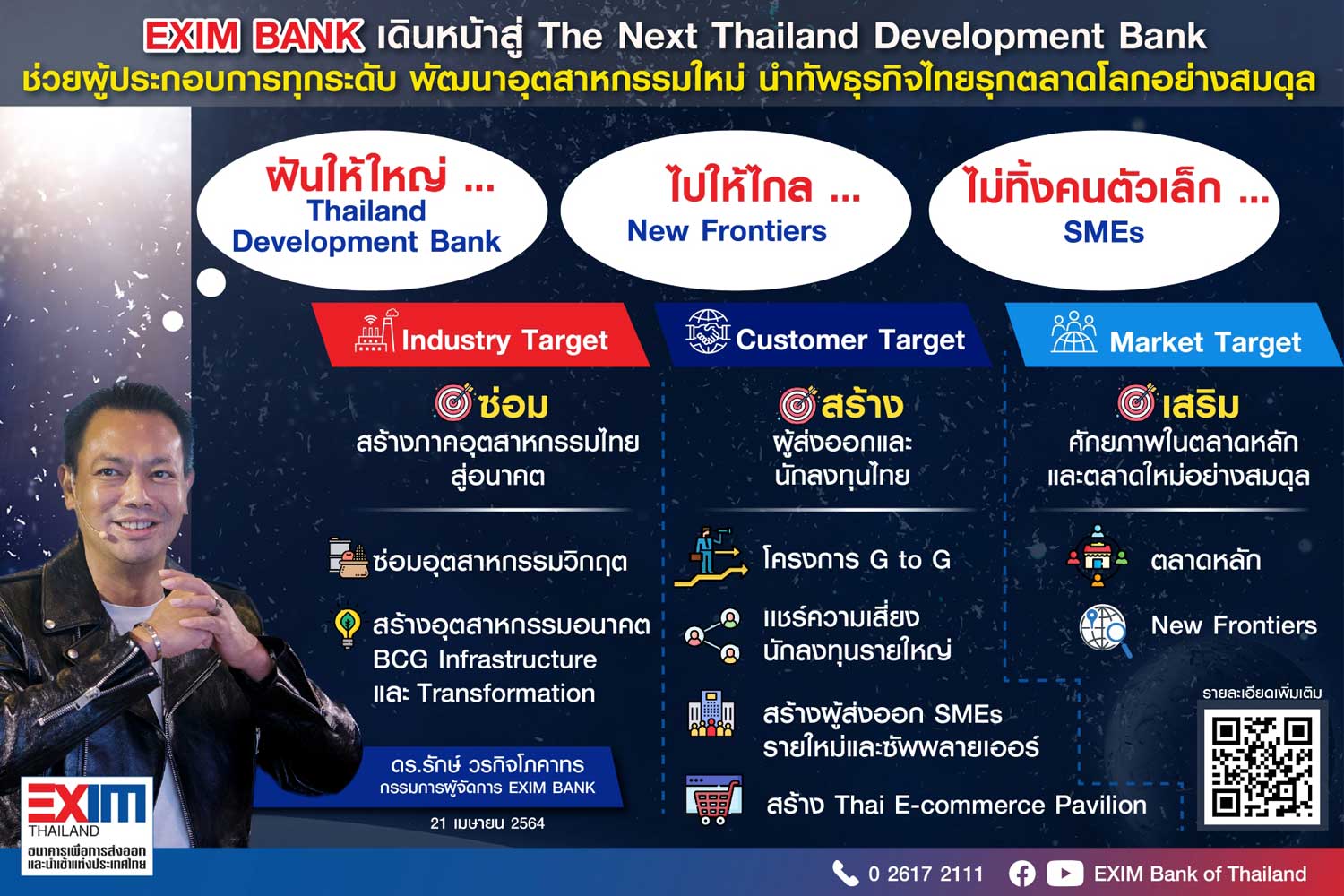