Four Chinese megastars were introduced as the first WeTV global brand ambassador along with plan to serve full-blown selection of the best Asian contents.

WeTV, the video streaming platform for the best Asian entertainment, announced four Chinese megastars: Dilraba, Xiao Zhan, Yang Mi, and Yang Yang, as its global brand ambassadors with the theme of “Watch the Best Asian Content on WeTV” as the company celebrated its third year of international presence as the provider of video streaming application available in several service areas, such as Thailand, Indonesia, the Philippines, Vietnam, Malaysia, and other markets, plus continuing expansion into Japan, South Korea, Middle East, Europe, and South America. With their outstanding works and strong fanbases worldwide, the four global ambassadors will pave the way for WeTV to expand its user base through real-time engagement in exclusive activities and the best entertainment experiences for global viewers on the WeTV platform.

Ms. Kanokporn Prachayaset, Country Manager of WeTV Thailand, Tencent (Thailand) Co., Ltd., recounted, “WeTV has successively launched in numerous markets, including Thailand as the first market outside China in the mid of 2019, making it one of the first video streaming platforms that focuses on delivering Chinese contents to local users overseas. Since then, WeTV has expanded to include more premium Asian content across different genres. These include TV dramas, variety shows, animations, movies, documentaries, and special live-event streaming programs complete with localized subtitles and voiceovers to provide an enriched viewing experience to local users. WeTV currently supports ten languages, including Chinese, English, Thai, Indonesian Bahasa, Japanese, Korean, Spanish, and Portuguese, and is able to broadcast most content from Tencent Video simultaneously. To expand its reach, WeTV partners with leading local TV stations and production houses in overseas markets to create local content and build two-way exchange channels, resulting in great reception from a lot of users who are fans of Asian content.”

WeTV’s social media presence has grown with over 42 million followers worldwide on YouTube, Facebook, Twitter, and Instagram collectively. At present, WeTV is ranked as a top-three OTT platform in many Southeast Asian markets. WeTV is the fastest growing video streaming service in Thailand, thanks to the enthusiastic response from Thai users who grew the WeTV user base in Thailand by more than doubling in 2020. 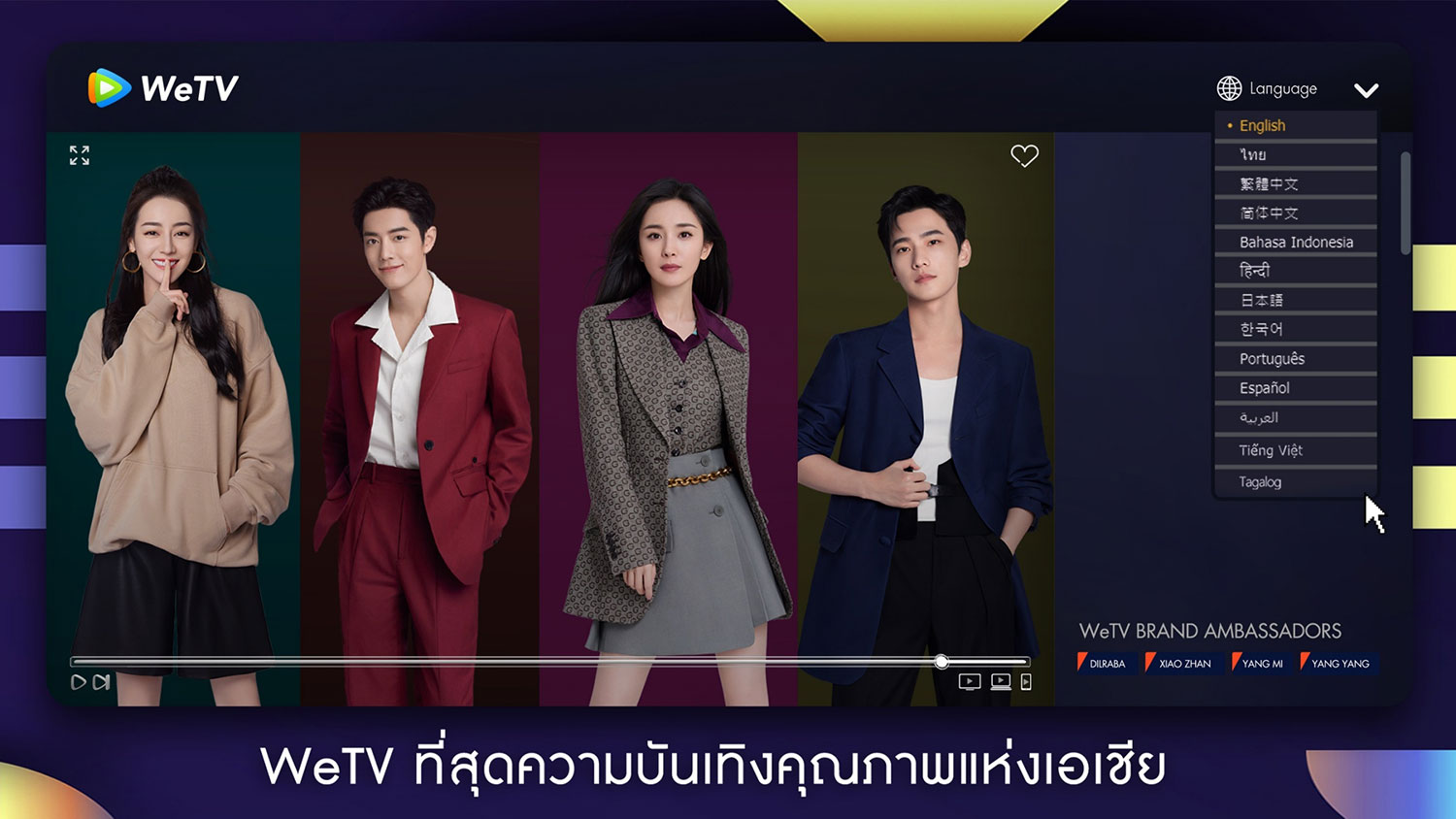 “As WeTV enters our third year of international presence following successful launches of our video streaming platform in Thailand, Indonesia, the Philippines, Vietnam, and Malaysia. Meanwhile, we are eyeing to further our business to Japan, South Korea, Middle East, Europe, and South America through our ‘Global Brand Ambassadors’ strategy. WeTV today announces our global brand ambassadors: the four Chinese megastars who have taken leading roles in globally famous works from Tencent Video, namely Dilraba (Eternal Love of Dream), Xiao Zhan (The Untamed), Yang Mi (The Untamed), and Yang Yang (The King's Avatar). In addition to their unique appearances in TV dramas, movies, and variety shows, all of them have strong fan bases worldwide. These drama series have already become big hits in the video streaming markets globally and are viewable on WeTV platforms and other channels. Recently, on its airing day on Monday 26th July, You Are My Glory starring Yang Yang and Dilraba had reached 100 million views within the first 4 hours of airing in China, while the four charismatic and talented global brand ambassadors will soon appear in new series, including The Oath of Love starring Xiao Zhan, Novoland: Pearl Eclipse starring Yang Mi, and many more that will be exclusively viewable on WeTV," Kanokporn said. 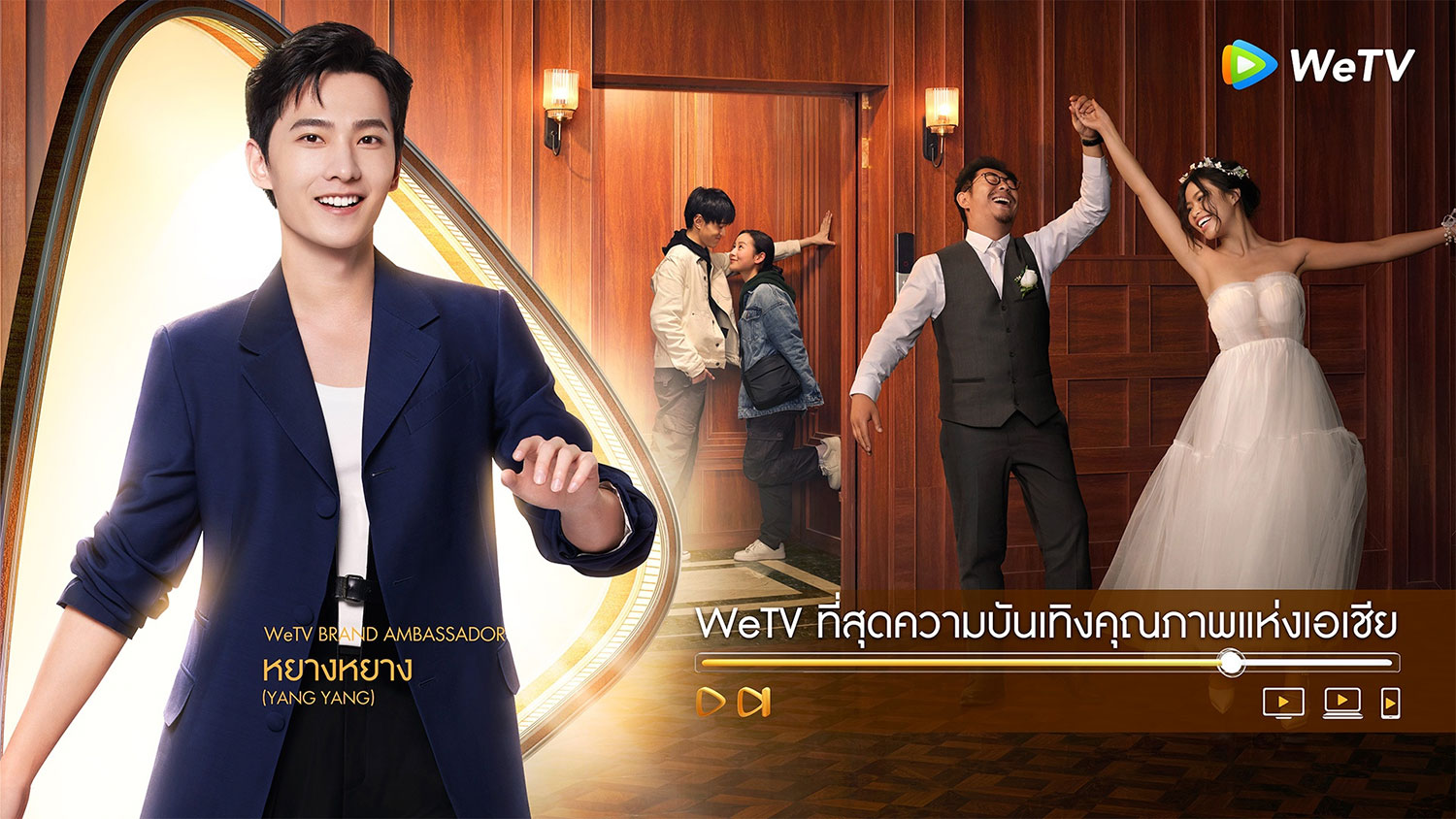 “In addition to partnership with the four global brand ambassadors, WeTV will continue to reassure the best Asian contents on our platform in the second half-year by combining technology strengths of our parent company and focusing on in-depth cooperation with local platforms and production companies to actively promote original local contents. At WeTV, we optimize the mix of local and international sources to ensure premium selection for the viewers, including original contents and world-class Chinese series from Tencent Video, original and exclusive Thai series, and a breadth of variety shows from Thailand, China and Korea. WeTV aims to bring first class entertainment experience to users in each market so that our users can watch the best Asian content on WeTV,” Kanokporn concluded.

Drug suppression units on Wednesday seized assets worth about 59 million baht believed to have been acquired through the drugs trade, an official said.