The most streamed French artist in the world, with a slew of international hits, DJ Snake is joining forces with Hublot to unveil an exclusive creation: the Big Bang DJ Snake. A watch boasting a myriad of facets, just like the talented artist who inspired it.

To be able to wear – and also offer my fans – a watch which reflects my personality is something that has been very important to me since the start of my partnership with Hublot.

I am delighted to have been able to combine my inspiration with the expertise of the fantastic watchmakers and technicians at this Swiss brand."

DJ Snake turns everything he touches to gold! We are thrilled to have been able to channel his outstanding creativity into this new limited-edition piece. The result is truly multifaceted, just like DJ Snake's talents!"

DJ Snake has such a huge presence in today's musical landscape that he needs no introduction. The electronic music star first came to public attention with the track "Turn Down For What", released in 2013. Since then, the hits have racked up: "Lean On", "Loco Contigo", "Let Me Love You" with Justin Bieber, and "Selfish Love" with Selena Gomez. Diplo, Kanye West, Lil Jon… the collaborations keep on coming! He became the first French artist to have two songs with over a billion plays on Spotify, and the awards have rained down: Billboard Music Awards; MTV Music Awards; and no fewer than three NRJ Music Awards.

Hublot and DJ Snake have been partners since January 1st 2018, when he presided over the decks at Hublot's closing evening during the FIFA World Cup in Russia.

Three years later, the first watch of this partnership is being unveiled: meet the Big Bang DJ Snake. The instantly recognisable iconic design of the Big Bang here gleams with a thousand coloured reflections. The bezel and the six titanium components of the 45-mm case are adorned with a "Newton's Rings" effect. This process, which is technically similar to a black PVD treatment, is achieved through charging with colours and precisely orienting the components to a certain position to obtain the required colour. The result is an optical effect in which the colours change depending on the light and when viewed from different angles. Not only that, but the surface of the parts was hardened before the iridescent treatment in order to improve its adherence. This operation is a complex one as it is difficult to obtain the same gradation of colour on each of the 100 watches being produced. The cut-outs on the outer edge of the bezel were designed by DJ Snake himself. These notches make the Big Bang DJ Snake immediately recognisable, distinguishing it from other collections. An illustration of the "Art of Fusion" philosophy so dear to Hublot! 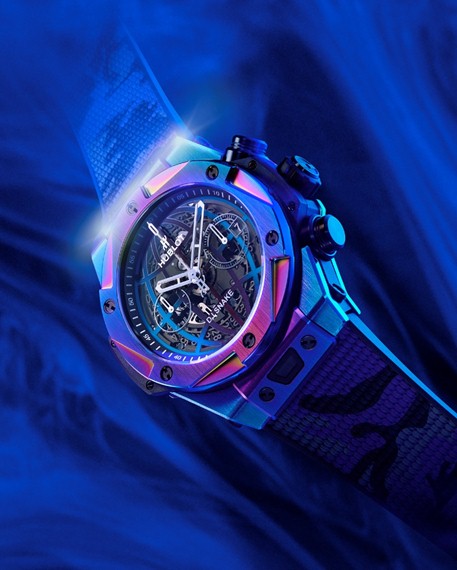 The upper face of the sapphire dial features a map of the world in the same colours as the case. This globe acts as DJ Snake's signature. A nod both to his travels across the planet for his concerts and to the fact that his hits have made the world his home. The lower section is skeletonised and treated to create sections with a black fumé finish.

This semi-transparent finish allows a glimpse of the famous calibre HUB1242 UNICO movement, a flyback chronograph with a power reserve of 72 hours.

Limited to 100 pieces, the Big Bang DJ Snake will be supplied with two straps which are easily interchangeable thanks to Hublot’s patented One Click system. The first is made from rubber, with a grey, black and purple camouflage pattern echoing the myriad colours reflected by the watch case. The second, also rubber, has a black ribbed structure. The clasp on these straps also features the same "Newton's Rings" effect as the case and bezel.

The daily fatality rate is up again, to 143 from the previous 106, but new infections are down.

Security agencies have been instructed to again step up vigilance along the border with Myanmar, this time to prevent weapons smuggling.