For its 9th edition, the biennial auction of unique timepieces sold for the benefit of research on Duchenne Muscular Dystrophy will take place on Saturday 6 November 2021, in Geneva. Christie’s remains the auctioneer of choice under the High Patronage of H.S.H. Prince Albert II of Monaco.

Among the watch manufacturers, Bell & Ross supports the Only Watch project and its incredible fundraising efforts in the fight against this disease. The Brand’s contribution takes the form of an exclusive one-off version of its recent BR 01 CYBER SKULL model: the BR 01 CYBER SKULL SAPPHIRE ONLY WATCH.

A multifaceted, multiverse and multi-talented timepiece.

The skull, an accepted sign of death, has a philosophical meaning as it symbolises the fragility and brevity of life, particularly in vanitas works of art.

Memento mori recall gruesome depictions in ancient paintings or in curiosity cabinets owned by humanists from the Enlightenment.

Bell & Ross had indeed developed a lasting tradition of horology pieces inspired by this thematic. 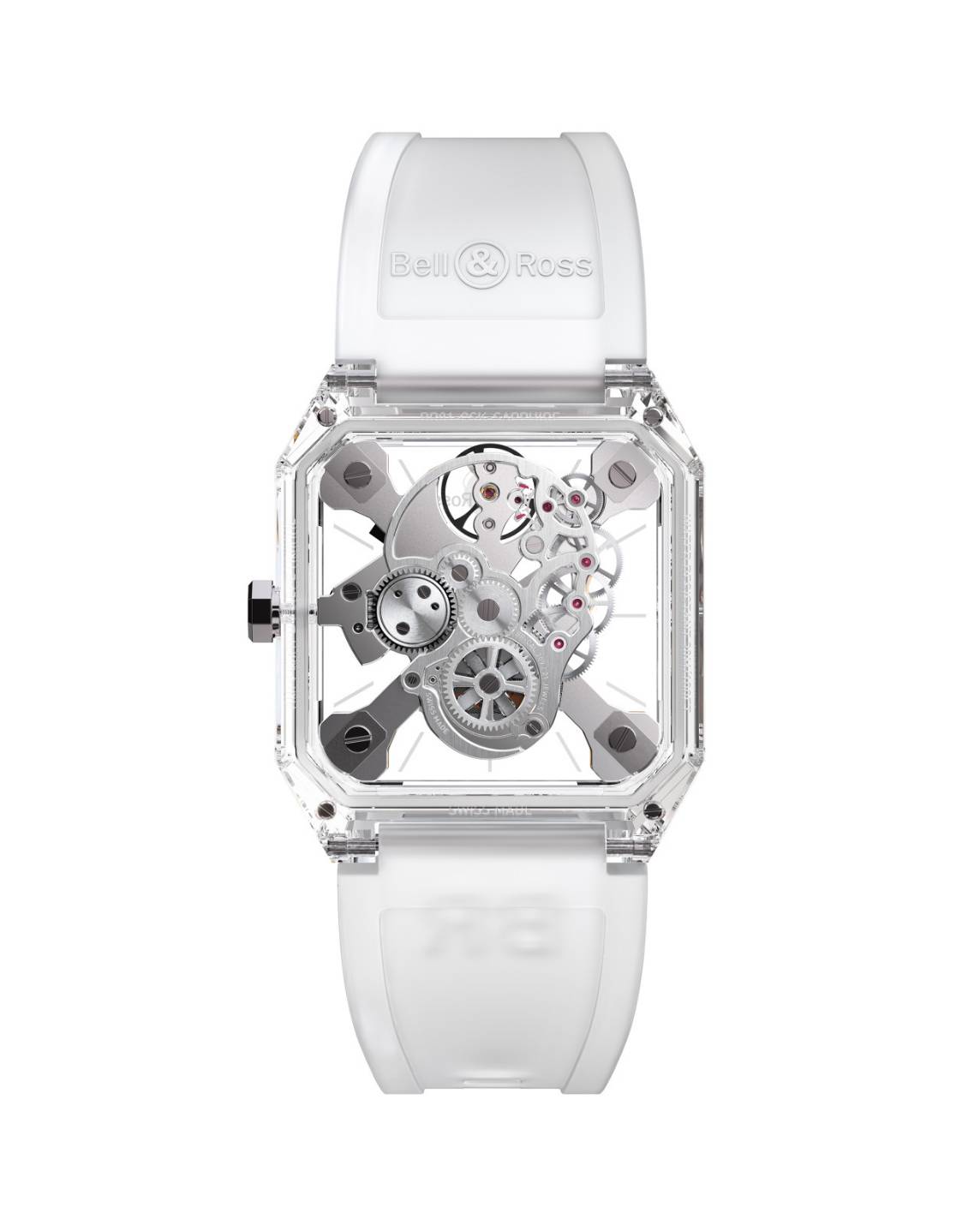 Bell & Ross chose sapphire to create this bespoke BR 01 CYBER SKULL SAPPHIRE ONLY WATCH version, a high-quality material made of corundum, an oxide of alumina (Al2O3) that has taken millions of years to occur in nature. Bell & Ross worked on clear lustre and elegant transparency to their fullest potential. The precious timepiece is conceived in its entirety with sapphire, for both the case and decoration. The sapphire case is machined from three blocks of sapphire. The SKULL dial from six blocks.

Compounded by the brute force of the material, the aesthetic force of the timepiece merges technologies together. Machined by grinding using diamond powder meant the facets could be resurfaced, in the same way jewellers cut a precious stone.

The exclusive BR 01 CYBER SKULL SAPPHIRE ONLY WATCH fits in perfectly with this style. It is characterised by the stylised and angular treatment of the skull on its dial. Each element of the watch, the case, crown, skull, crossbones, is structured within the many faces that sculpt the surfaces, creating volumes and a 3D image.

Emphasised by its sharp edges, its many facets offer a fascinating play on the multiplication of perspectives, between flat and smooth surfaces. Futuristic origami? Memento mori 2.0? New cameo by a cyborg? The BR 01 CYBER SKULL SAPPHIRE ONLY WATCH produces a multifaceted approach.

The geometric shapes of the timepiece create a pixilation effect. This phenomenon appears when the points of an image become clear. The angular representation of the skull and the femur bones on the dial are inspired by this.

For this bespoke version of the CYBER SKULL, Bell & Ross used the orange colour to provide its owner with a unique piece for its wrist. Made of transparent sapphire, the Skull dial was metallised on the back that has a smooth side to give this orange effect. Orange is the ultimate colour for aeronautical instrumentation due to its high level of legibility and capacity to make essential information stand out from contrast. It is also the emblematic colour code of ONLY WATCH, which is used on its logo. The back of the watch also features a special engraving for ONLY WATCH. 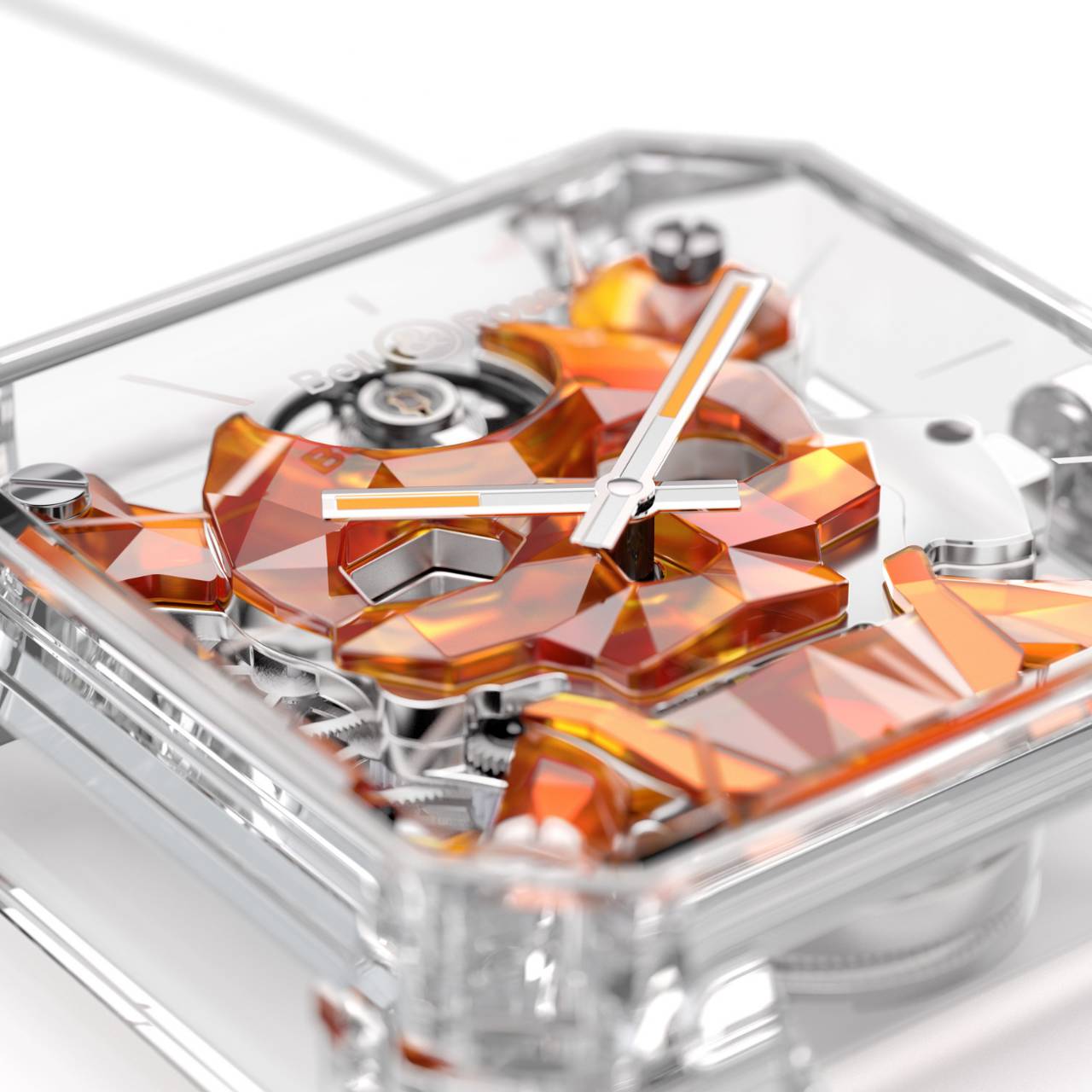 Behind its provocative, symbolic, and artistic face, the BR 01 CYBER SKULL SAPPHIRE ONLY WATCH hides the secrets of an automaton watch belonging to the world of Haute Horlogerie.

To create it, Bell & Ross developed the BR-CAL.209: a calibre entirely designed by the manufacture. While the mobiles were mounting on 21 jewels, the balance benefits from an Inca bloc type shock-absorbing system. The brand also worked on the skeletonization of the main plate and bridges to reveal the essential. The finishes are highly sophisticated: rhodium-plated movement, polished chamfers, velvet sanded hollows, hand- drawn strokes decorations.

Only perfect mastery of the operation of a mechanical movement could, in reality, conceal the BR-CAL 209 hand-wound movement under the faceted decoration. The main plate closely follows the shape of the skull, while extending up to the four corners of the case, underneath the femurs. The whole was fixed on the case. An architecture like this makes the skull appear to float weightlessly inside the case. An impression which is enhanced by the total transparency of the dial, highlighted solely by 12 baton-shaped engraved under the crystal. The complete clarity of the watch reveals the key to the mystery through the Skull.

In addition, there is a surprise that will make you laugh. The automaton movement activates the jaw which opens and appears to snigger when winding-up the spring. Behind the mandible hides the barrel that you will discover when the skull grins back at you! Making up the brain of this skull - which has finally come to life - the anthracite balance wheel reveals its oscillations. The beating of the same, serves as a reminder of the watch’s mechanical heart.