Mitsubishi Motors Thailand on 30 November launched its first models of the revived and iconic RALLIART brand. The launch saw the release of two RALLIART Models; the Triton RALLIART and Pajero Sport RALLIART for the first time in the world, at the 38th Thailand International Motor Expo 2021. The starting price for the models is at 667,000THB.

“Mitsubishi Motors learned three key values from its victories at some of the world’s toughest rally championships, such as the Paris Dakar Rally and World Rally Championship,” said Mr. Eiichi Koito, President & CEO of Mitsubishi Motors (Thailand) Co., Ltd. “To win those tough competitions, we learned that our vehicles should have high performance, be durable and tough, and also have comfort in order to claim victories with confidence. That victorious DNA is embedded in our current products and RALLIART is the best brand to showcase our DNA and passion.”

“The revived RALLIART models will deliver ‘The Spirit of Victory’ DNA to Thai customers, adding more enjoyment for Mitsubishi owners, enhancing their fun driving experiences and the sophisticated stylings within their vehicles. And we would like to deliver our passion to as many of our customers in Thailand as possible, with very competitive prices. Most importantly, this is just the beginning of our new RALLIART brand. We use this special occasion to display the real legends of RALLIART Champions, brought straight from the Mitsubishi Auto Gallery in Japan. I hope everyone can feel the excitement and passion from both of our legend champion machines and the new RALLIART models”

For the exterior, RALLIART original items, including the iconic side decals with red, silver and black stripes, red coloured mud flaps with RALLIART logos, and a front bumper garnish with the RALLIART logo are included in the package. Also, differentiating themselves from the standard trim level, the black coloured exterior parts are exclusively adopted for the front grille, alloy wheels, and roof panel. For the interior, floor mats with the RALLIART logo are also featured. 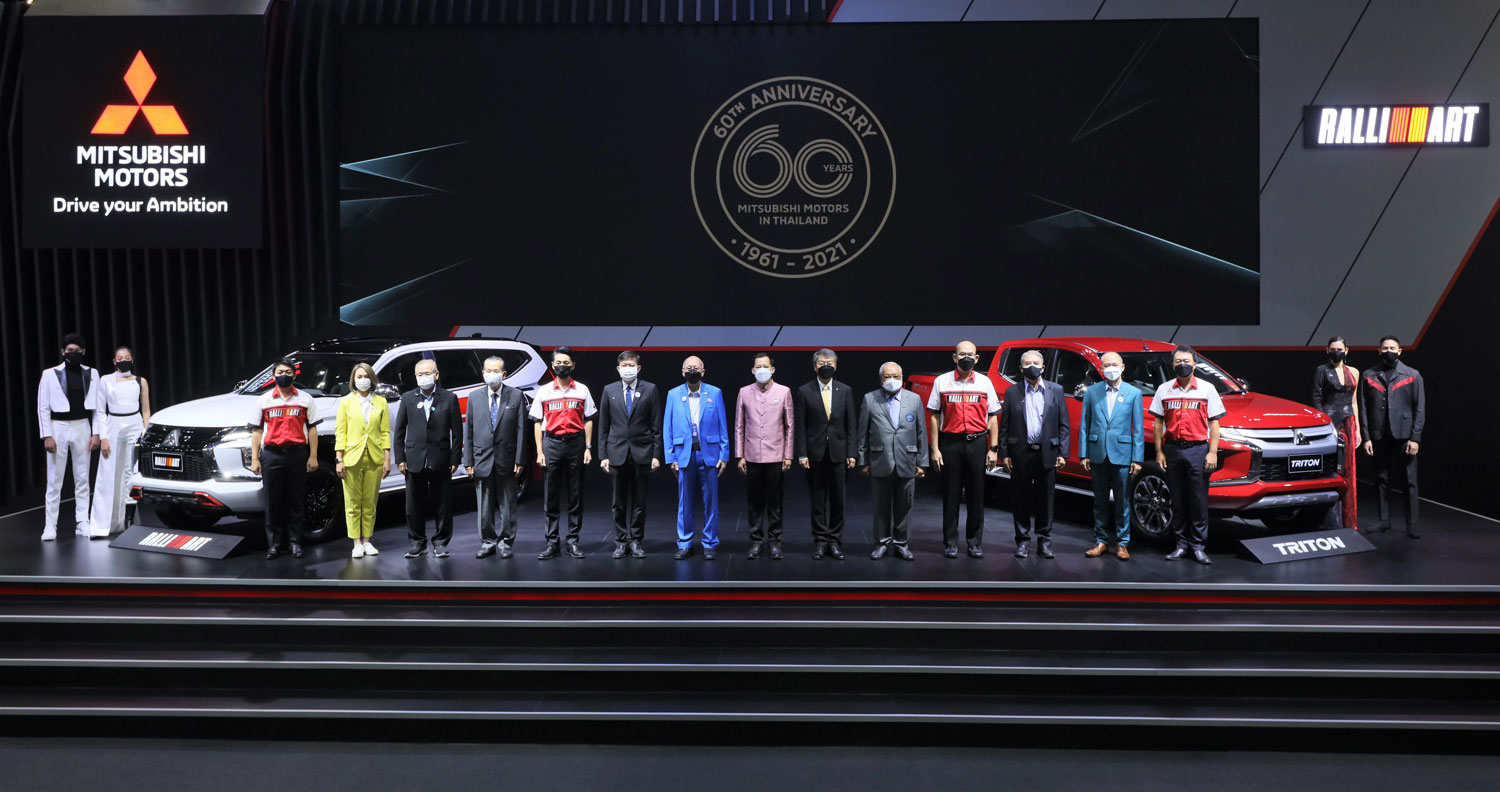 This year, to celebrate the 60th anniversary of Mitsubishi Motors in Thailand, the company wants to recall its memorable history and to show our appreciation for Thai by showcasing three legendary models that highlight the past successes of the brand in both the commercial and motorsport worlds at the 38th Thailand International Motor Expo 2021. The three legendary models are:

1) The Three-wheel LEO was the first Mitsubishi model sold in Thailand. Mitsubishi's three-wheel LEO was first launched in Japan in 1959. The vehicle offered scooter-like drivability and featured the first fully enclosed all-steel cabin with seating for two on three wheels. After the launch, it shortly became a best-seller, with production topping 1,000 units a month. Mitsubishi Motors exported the Mitsubishi LEO from Japan and sold it in Thailand in 1961.

2) The 1985 Pajero: Mitsubishi Pajero participated 26 times at the Dakar Rally between 1983 and 2009, taking over all champion on 12 of those occasions and achieving a victory ratio of around 50% during the time. It took the first overall win at Dakar Rally and became renowned as the first major victory for a Japanese manufacturer in 1985. In the same year, Mitsubishi Motors introduced the prototype of PAJERO/MONTERO – based on a ladder frame and the body of production vehicles and with a 2.6L 4G54 gasoline turbo engine, the vehicle was able to deliver a maximum output of 225PS with its turbocharger and intercooler. By changing the final gear ratio, the car was able to reach a maximum speed of 185 kilometres per hour.

3) The Lancer WRC05 originated as a car series from the Mitsubishi Lancer Evolution which was dubbed the ‘King of World Rally Championship’. Mitsubishi Lancer Evolution model came with advanced technology in 4WD systems, known as Super All-Wheel Control (S-AWC) which are the feedback from the know-how in the World Rally Championship. The technology equipped with the model, made Mitsubishi Motors won 34 victories in World Rally Championship (WRC) between 1967-2008 of which 26 victories were by Lancer Evolution, reaching its zenith by winning 4-years in a row from 1996 - 1999. For Lancer WRC05, the model participated in the World Rally Championship in 2005. Under the new vehicle regulations adopted from that year, the vehicle was significantly improved in many parts such as total width expansion of the vehicle, longer suspension link and drive shaft adoption, suspension geometry optimization, engine management optimization, and newly adopted semi-automatic gearbox and clutch. The combination of these improvements significantly raised the level of performance and provided for a refined tuning.

Mitsubishi Motors Thailand has also continued its commitment to social contribution through three key pillars; Environment, Health, and Education, in tandem with driving Thailand’s automotive industry even further towards sustainable economic growth. Our vision for the environment is to help the country become a carbon-neutral society. Many initiatives to achieve this have been implemented by Mitsubishi Motors Thailand. The company fully supports CO2 reduction through its 60 Years 60-Rai reforestation project and its use of solar panel rooftops at its production facility in Laem Chabang, Chonburi. The renewable energy created through the solar panels across all projects at the facility are set to reduce C02 emissions by more than 6,100 tons per year.

In the field of automotive product development that will help solve environmental problems, Mitsubishi Motors Thailand has launched the Outlander PHEV, a premium plug in hybrid electric SUV with high performance and low emission in Thailand. The PHEV model is currently considered the most optimal powertrain option in terms of eco-friendliness when considering not only tailpipe CO2 emissions, but also the total CO2 emission overall, from the point of generating electricity and during the vehicle production process, according to the Life Cycle Assessment (LCA) by Mitsubishi Motors Corporation.

The Triton RALLIART, Pajero Sport RALLIART, XPANDER Special Edition and Pajero Sport Special Edition are now all available for booking. Visitors are welcome to visit Mitsubishi Motors Thailand's booth number A07 at the 38th Thailand International Motor Expo 2021, that will be taking place on December 1-12, 2021 at Challenger Hall 1–3, Muang Thong Thani. These models are also available for booking at Mitsubishi Motors’ outlets nationwide.

For more information about Mitsubishi Motors Thailand’s cars and to schedule a test drive, please contact Mitsubishi Showrooms nationwide, visit www.mitsubishi-motors.co.th or contact the Mitsubishi Call Center via telephone at 02-079-9500, which is available 24 hours daily.