Fear of a banana republic

Contract farming can be successful for farmers, but foreign investment in plantations has led to environmental concerns.

well watered: Banana trees in the Hongtar International plantation in Phaya Mengrai district in Chiang Rai. The plantation has been under scrutiny after residents alleged it pumped too much water.

Sam-Ang Butprom describes the green bananas from his farm as a miracle. "This is the best banana in the world -- the miracle fruit," he said.

Touching its smooth green skin, smelling its tempting scent and tasting its full flavour, he said his green bananas have a special quality that is hard to find.

"They are a sexual stimulant for both men and women," he said. "Chinese people like to eat bananas with garlic while drinking alcohol." The odd combination is said to aid sexual drive.

Unfortunately for Chinese consumers, the climate at home is mostly too cold to grow banana plants. "So Chinese businesspeople sometimes invest in banana plantations in Laos and Thailand," the 51-year-old Mr Sam-Ang said while showing Spectrum the largest banana plantation in Chiang Rai's Phaya Mengrai district.

The banana plantation, leased and operated by Chinese-Thai company Hongtar International, began operation in the middle of last year with trees planted on 1,000 rai of land. A further 1,700 rai is available for planting as the business grows.

Dressed in camouflage-patterned pants and a green hat, Mr Sam-Ang supervises more than 100 employees who work in the fields. Banana trees stretch across the horizon as far as the eye can see. The plantation is divided into four segments according to their stage of growth, from a nursery of plantlets through to fully grown banana trees. 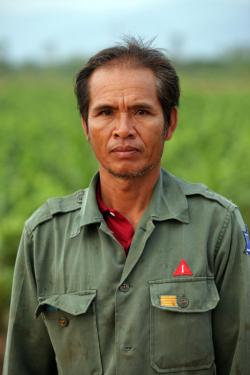 Mr Sam-Ang assigns workers to different tasks -- some supervise the growth of plantlets, others cover the fruit with white plastic to prevent insects, and those with a keen eye select the good bananas and package them in boxes for export. "Workers are stationed from nine to five. Many of the workers are Thai-Hmong or Thais from nearby villages," Mr Sam-Ang said. They earn 300 baht per day.

But recent attention, when local media reported that the plantation was diverting water from the Ing River and affecting farmers downstream, has meant Mr Sam-Ang has had to defend its owners.

"This banana plantation creates jobs for many people," he said.

Many residents, aware of an incident in northern Laos where banana farmers ended their agreement with Chinese investors believing their plantation had polluted local water, view Mr Sam-Ang's crop with suspicion.

A story in the Vientiane Times on April 20 quoted a report by the National Agriculture and Forestry Research Institute (Nafri) of Laos which found 8% of banana farmers in northern Laos reported falling ill over the previous six months, believed to be from chemical fertilisers used at the plantations.

Nafri's Palikone Thalongsengchanh said Chinese companies want to establish banana plantations in Laos for three main reasons: the low cost of land leases, favourable labour costs and the lax controls over the use of chemicals.

Chiang Rai Chamber of Commerce vice-president Sa-nguan Sonklinsakul is concerned about the issue of chemical control.

"We are told that chemical substances washed away from the dirt surface of banana plantations in Laos might pollute the Mekong River," he said. "Many fish have died without any reason recently."

But Mr Sa-nguan said it was too early to determine whether the new banana plantation in his province could cause harm. He said it is the job of "responsible agencies" to ensure banana plantations follow good agricultural practice.

"If anything negative did happen it would damage the country's reputation as a kitchen to the world," he said.

Hongtar International is owned by Chinese and Thai investors, with the lion's share being locally owned -- the law does not allow foreigners to majority own and lease land for commercial agricultural production.

Despite this, residents in Chiang Rai describe Mr Sam-ang's plantation as "the Chinese banana garden".

Hongtar International started leasing the land, a former orange plantation, about a year ago. The company exported its first batch of bananas to China in March.

"We had to wait nine months for the first crop of bananas to bear fruit," Mr Sam-Ang said. "But the next crop should come out sooner -- perhaps in only six months."

Mr Sam-Ang said the company was restructuring and changing management. He told Spectrum the company was renamed last week, but he could not recall its new title. He said he did not have any contact details for the owners and Spectrum's attempts to trace them proved unsuccessful.

To appease locals' concerns, the plantation temporarily stopped pumping natural water from the Ing River last month. "Now, we are lucky -- the rains have come and that has watered the plantation," Mr Sam-Ang said.

Many residents in the nearby Sondondee Mengrai village work at the plantation. Its village chief Muang Chatcharat said he supports the farming.

"When the Chinese investors first came, they sounded out opinions from the locals," he said. "I thought it would be good for the village because people could earn extra money."

The village chief of Ta sub-district in Khuntan district, Luen Pewphong, said he is concerned about the use of fertilisers at Chinese-owned plantations in Laos. He urges authorities to investigate the use of chemicals at the Phaya Mengrai plantation.

"We do not know whether they have discharged chemicals into the Ing River," he said. "The company's representatives told a meeting they did not use a high amount of fertilisers [compared to Laos] as Thailand has less insects than Laos."

Mr Luen said villagers also thought the Ing River was unusually dry this year as the plantation had pumped too much water from it. 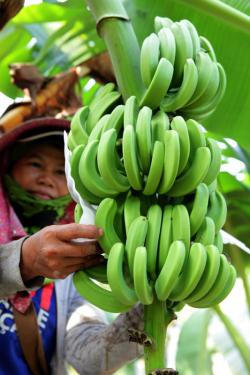 Careful inspection: A worker checks the quality of bananas.

Mr Sam-Ang shrugged off the allegation. "It's exaggerated," he said. "People blame everything on the Chinese."

The chief of agriculture at a co-operative office in Chiang Rai, Thewan Thanamalarat, said his organisation had found the plantation's chemical residue was not at a harmful level.

He also said they were examining whether the company that ran the plantation was majority owned by Thai or Chinese. He expects foreign investment in the province for the purpose of contract farming would continue to rise.

Chiang Rai provincial policies aim to reduce rice plantation growing areas from 1.2 million rai to just over 1.1 million rai this year. It's expected contract farming will provide an alternative for rice farmers. "We are likely to enter into an agreement with South Korea to grow strawberries in Chiang Rai very soon," Mr Thewan said.

Asked whether the government should allow outside companies to be involved in agriculture here, he said, "It is at a policy level -- I don't have the authority to say. But I think they can help us by bringing in technology."

Located in a cooler area of Thailand, Chiang Rai is thought to be an ideal place for commercial plantations. A large portion of the province's plantations have operated on contract farming agreements.

Contract farming is essentially an agreement on price and volume between farmers and buyer, set before crops are sown. It allows farmers to know in advance the minimum price they will get for their produce.

Japanese investors have poured money into a number of contract farming projects for several decades. Lanna Agro-Industry Co Ltd is one such company, and one of the largest operating in the North.

"Previously, the result was unpredictable as it depended on supply in the market, which can fluctuate."

As a contract farmer, Mr Thawil receives a guaranteed price of 16.50 baht per kilo.

"The price is generally better than selling to an independent," he said.

"Selling to an independent can be as low as 10 baht per kilo."

Profits made depend on the produce. The farmer, the company and the broker -- often the village head -- divide the profits equally.

Mr Thawil produces two crops of edamame a year, with each crop taking three months from planting to picking. He earns about 100,000 baht per crop of which roughly 50% is profit.

While walking around the fields with Mr Thawil, Lanna Agro-Industry agricultural specialist Jaturong Nachar said, "We have to constantly check the quality with the farmers, ensuring that they use the exact amount and the right kind of fertiliser to meet the company's standard."

"Farmers who use organic fertiliser have to check the farm more often -- once every three days. But contract farmers [who use chemical fertilisers] only need to check once a week," Mr Jaturong said.

"The demand for green beans is increasing in Japan and many Thai farmers are interested in pursuing a contract farming agreement with us."

While Japanese investment in contract farming projects has become more accepted by local communities, Hongtar International's green banana project saw public scrutiny due to its different method of operation. The company leases land from a Thai investor and then hires Thai employees to work on the farm.

Under Lanna Agro-Industrial's model contract farmers, who own the land, have the power to negotiate prices, said Ekasit Nunbhakdi, coordinator of the Japan Watch Project and a researcher for Thailand Research Fund.

"We have to ask ourselves why Thai farmers have to rely on Chinese investors, who are perceived as treating workers and resources poorly. Are we taking care of our farmers well?"

In addition, Thailand does not view agriculture as important to its culture.

"Unlike the Japanese who see agriculture as part of their cultural foundation," Mr Ekasit said.

"Thailand views agriculture as a commercial product. Thai farmers receive too little assistance, they take whatever they can get." 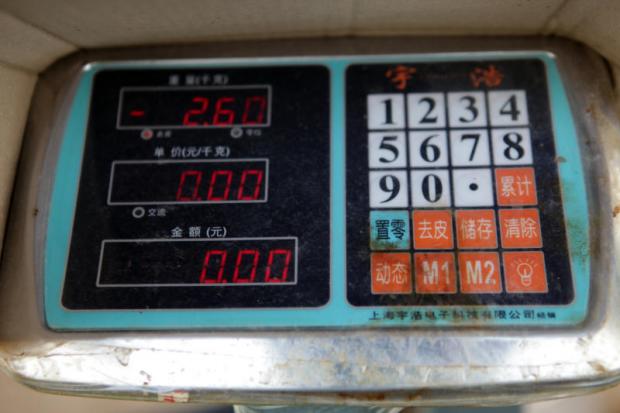 Weigh it up: The characters on the scales show the influence of the Chinese owners. 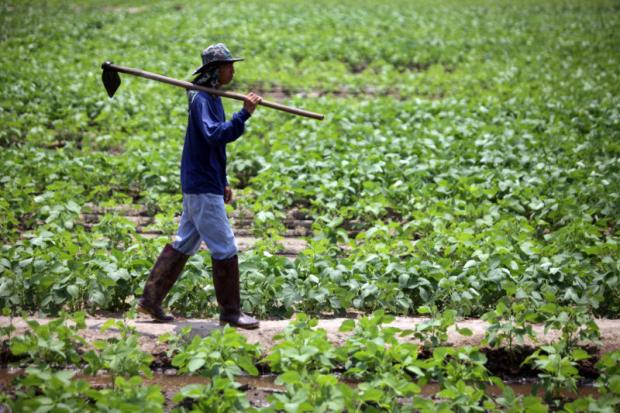 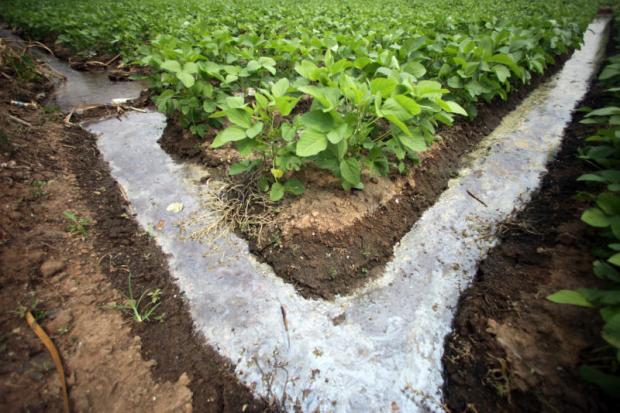 Bean there, done that: Edamame, or Japanese green bean, receive a guaranteed return of 16.50 baht a kilo for Thai farmers when sold to Japan under contract.