A dog waits as its owner casts their ballot paper in a polling station set up in the grounds of a private residence near Fleet, southwest of London, on Thursday, as Britain holds a referendum to vote on whether to remain in, or to leave the European Union. (AFP photo)

PARIS - It was Britain's poorer and less-educated citizens -- angry at not having shared in the economic benefits of a new world order -- who pushed it out of the European Union, in a vote that threatens elites, analysts say. 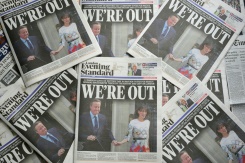 Rural areas with high numbers of migrant workers, former industrial hubs and poor areas around cities, those without a university education and older voters were all among the 53.4% who voted Brexit.

They are those who suffered the worst hangover from the economic crisis, and whose precarious economic position makes them most fearful of rising immigration -- to the benefit of far right groups in the EU and Donald Trump in the United States.

"I see the same pattern everywhere I look," said William Galston, a senior fellow at the US-based Brookings Institution.

Rural areas with high numbers of migrant workers, former industrial hubs and poor areas around cities, those without a university education and older voters were all among the 53.4% who voted Brexit.

Mr Galston said this was the same demographic backing controversial Republican candidate Trump in the US, as well as eurosceptic and far-right parties enjoying a rise in support across Europe.

"They mistrust political elites because up until now they haven't seen any political parties who appear to recognise their discontent and respond to it."

Mr Galston said while he did not expect these forces to prevail in the United States as they did in the Brexit vote, they were a "major warning signal to established parties throughout Europe".

'It's about what people feel'

Fears are high of a domino effect, with eurosceptic, leftist and far right parties from France to the Netherlands crying victory after the shock Brexit result was announced and calling for similar votes in their own countries.

Political scientist Melanie Sully of the Vienna-based Go-Governance Institute warned Europe was facing a "crisis of democracy" that could be exploited by xenophobic, far right parties.

"If you don't have any trust in politics, it's exactly the sort of black hole populists can march into and capture the mood and build on it, to perpetuate their own falsehoods," she told AFP.

At the root of this surge in anti-establishment sentiment is a feeling of fear, loss of control, and traditions and identity lost among those who are struggling economically, analysts say.

"Before we talk about populism, the anti-establishment, we have to talk about the social position of these people. What do they earn? How do they see their everyday lives?" said Tetiana Havlin, a sociologist at the University of Siegen in Germany.

"In everyday life nobody thinks about anti-globalisation, anti-establishment. They just see their challenges", she said.

"This of course gives fertile ground for populism... but in the end this is about what people feel."

Observers point to two main drivers of the surge in scorn for the elite: the hangover from the 2008-9 economic crisis and the refugee crisis.

"You have a lot of people who took a big hit. These are people who feel economically vulnerable, and when you put demographic fears on top of economic vulnerability this is what you get," said Mr Halston.

"I don't think its mysterious anymore, we may have been scratching our head a year ago but we should be in no doubt now."

Many young people who voted "Remain" are furious at the number of older British voters who backed Leave -- lumbering them, as they see it, with the consequences of their decision for decades to come.

Mr Havlin said that many of these voters saw the EU as a source of security and stability when Britain joined in 1973, a time she refers to as "the prosperity years".

Now older, these voters reeling from austerity and a sense of growing threats at Europe's borders, feel "threatened and insecure".

Dominique Moisi, of the French Institute of International Relations (IFRI) said the Brexit earthquake was a dark moment in Europe's history, comparing it unfavourably to the fall of communism.