Indonesian men offering prayers at a 'mobile mosque' outside a sports complex in Jakarta on June 28, 2016. (AFP photo)

JAKARTA - As the call to prayer rang out across the Indonesian capital, Sutikno faced a dilemma -- the devout Muslim needed to set off through Jakarta's notorious traffic to pick up his wife but did not want to miss out on worshipping.

However, for him and others juggling the demands of hectic, 21st century life and piety in the crowded capital of the world's most populous Muslim-majority country, a solution has just pulled up.

The "mosque-mobile" started cruising through Jakarta in June as the Islamic holy month of Ramadan drew to a close, aiming to ensure Muslims did not miss out on prayers by setting up in busy places, such as near festivals and sports events.

Sutikno, a middle-aged office worker who, like many Indonesians, goes by one name, came across the van parked between a sports stadium and shopping malls, and it proved a godsend.

"I was supposed to go to a mosque that is quite far away but then I saw this one," he told AFP.

"I just parked my car and performed my prayers here. I can save time and go and pick up my wife faster."

The green-and-white van has been specially adapted to become a mobile place of worship. At prayer time, the sides of the vehicle open up and a small stage is extended, from which the imam preaches.

Prayer rugs are rolled out in front of the van, with space for up to 100 people, and a handful can worship inside the vehicle. It also provides special robes for women and a tank of water for the faithful to ritually cleanse themselves before praying.

The mosque started operating in Jakarta with a team of four in the final week of Ramadan, a month of fasting and piety, but plans to continue afterwards.

The van offers its services between 3:00 pm (0800 GMT) and 7:00 pm (1100 GMT) for two prayer sessions, at a time traffic is bad as millions flood out of downtown areas and head back to satellite cities. Muslims are supposed to pray five times a day.

During Ramadan, the crew running the Jakarta "mosque-mobile" also serve snacks to people stuck in gridlock when it is time to break their fast.

The van is run by the Archipelago Mosque Foundation, an organisation that sets up and maintains mosques, with funding provided by Adira Sharia, a group that provides Islamic-compliant financing for motor vehicles.

"We were concerned that there was a lack of places of worship at crowded spots such as music concerts, festivals and football games. Sometimes people intend to pray, but because there are no facilities, they skip it," said Hamzah Fatdri, director of the mosque foundation.

The Jakarta mosque-on-wheels has hit the streets after the foundation launched a mobile place of worship in the city of Bandung, southeast of the capital on the main island of Java.

The Bandung mosque proved a success, offering prayer sessions at 50 different locations in its first year of operation, and the foundation hopes the van in the capital -- which is slightly larger than the Bandung model -- can do even better.

Indonesia is already home to some 800,000 mosques, including a large number in Jakarta and other major cities.

But with many people stuck in gridlock at prayer time -- particularly during Ramadan -- and ad hoc festivals and sports events typically failing to provide facilities for praying, the foundation believes the "mobile-mosque" will be a great help.

It is the latest innovation to offer relief to residents of Indonesia's booming but overcrowded, traffic-choked cities, where hundreds of new vehicles are hitting the roads every day as the middle class rapidly expands due to strong economic growth.

Motorbike taxi-hailing apps that whisk passengers quickly through the gridlock have been a chief beneficiary, and have expanded their businesses into other areas such as food delivery and courier services.

Still, some worshippers were not immediately taken by the mosque-on-wheels.

"Maybe because this was a new experience, I felt a bit awkward and embarrassed to pray in an open, public space," student Mahtashal Harbi said after worshipping for the first time at the Jakarta van. 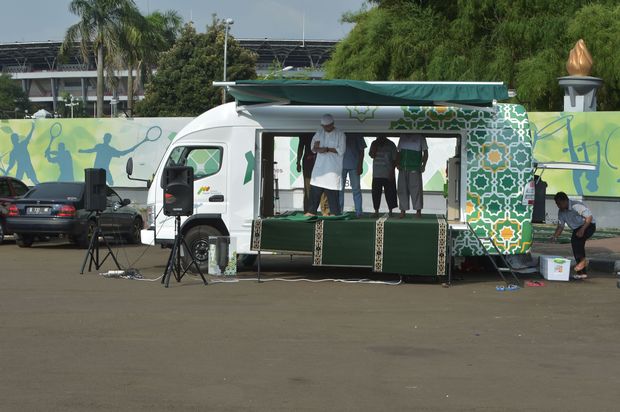