Inmates work out in a yard inside Klong Prem high-security prison in Bangkok on July 12, 2016. (Reuters photo)

Somsak Sreesomsong was 18 when he was jailed for selling illegal drugs. Now, turning 30, he is not yet half-way through his 33-year sentence at Bangkok's high-security Klong Prem prison.

Somsak was "just a kid, not a big-time dealer", his older brother Panit told Reuters after a visit to the jail. "We're also serving time, waiting for him to get out so he can help the family."

More than a decade after Thailand declared a "war on drugs", the country is admitting defeat. As the prison population soars, Justice Minister Paiboon Koomchaya told Reuters he was looking at changes to the country's draconian drug laws.

"I want to de-classify methamphetamine but Thailand is not ready yet," said Gen Paiboon, meaning downgrading the drug, popularly known as "meth", from a Category 1 substance, which would reduce jail time for possession or dealing.

Use of methamphetamine is spiralling across Southeast Asia, and authorities are struggling to respond.

In the Philippines, which has some of the highest rates of "meth" use, police killings of drug suspects have spiked since the swearing-in of President Rodrigo Duterte, elected on a platform of harsh measures to wipe out drug crime.

Myanmar, the source of much of the drugs flooding through the region, is bracing for an explosion in domestic use.

Overall, drugs supply in Southeast Asia, especially of methamphetamine, is at a record level, according to the United Nations Office on Drugs and Crime (UNODC). 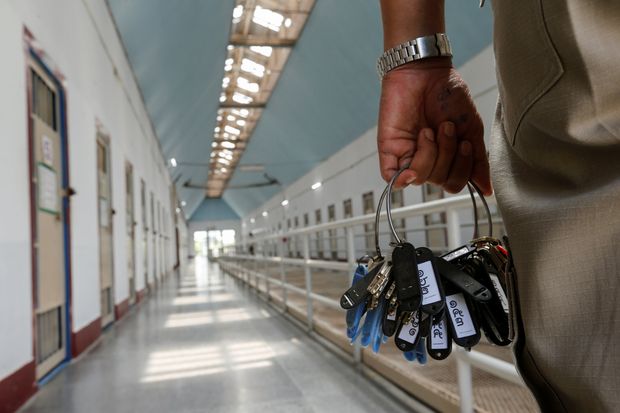 In common with much of the region, Thailand's criminal justice system treats drug offenders harshly.

Producing and trading in Category 1 drugs, which also include heroin, MDMA -- the main chemical for ecstasy pills -- and LSD, is punishable by death or life imprisonment.

Klong Prem is home to 6,267 inmates serving sentences that range from 15 years to life, with 64% convicted of drug-related crimes.

"Some of the men, especially the foreign prisoners, are pretty big, so it's a squeeze for them," said one prison guard.

Lengthy sentences for drug offences are part of the reason why Thai jails struggle with chronic overcrowding, according to both Justice Minister Paiboon and UN experts.

Thailand has approximately 40% of Asean's prison population, despite having only 10% of the bloc's total population, the UNODC says.

Gen Paiboon, an army general and senior member of the junta that seized power in a 2014 coup, said in an interview that Thailand would build more prisons, including 17 temporary jails for prisoners who have served at least a third of their sentence. 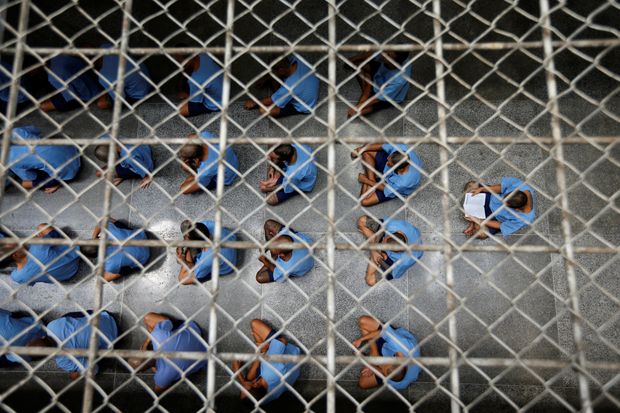 Inmates sit on the floor during an inspection visit in the long-term sentence zone inside Klong Prem high-security prison. (Reuters photo)

He added that his priority was to tackle drug trafficking and addiction -- an ambitious plan in a country where a record number of people use methamphetamines, known in Thai as ya ba or "crazy medicine", according to a 2015 UN report.

A crackdown launched by former Prime Minister Thaksin Shinawatra in 2003 aimed at suppressing drug trafficking killed more than 2,800 people, according to an independent inquiry chaired by a former attorney general.

But the country's growing number of drug users and bulging jails have forced policymakers to think again.

"The world has lost the war on drugs, not only Thailand," said Gen Paiboon. "We have clear numbers that drug use has increased over the past three years. Another indicator is there are more prisoners."

A 2015 report by the Institute for Criminal Policy Research shows Thailand has the fourth highest number of women imprisoned in the world, after the United States, China and Russia.

"We know from meeting and interviewing prisoners, including female prisoners, in Thailand, that the impact is profoundly negative for families," said Jeremy Douglas, the UNODC's Asia-Pacific chief.

One former female inmate, who declined to be named because of the social stigma attached to drug offenders in Thailand, said she was jailed for three years after being caught with 20 methamphetamine pills.

"My boyfriend was the dealer. I was carrying the pills for him. My son doesn't want anything to do with me now," she said.

The number of inmates jailed for drug convictions has almost doubled over the past decade, Thai Department of Corrections figures showed, a result of unsparing sentencing that puts even petty users behind bars.

"We need to change sentencing and make a distinction between small and big time dealers," said Klong Prem prison commander Thawatchai Chaiywat. "Thailand thinks prisons are a panacea for all crimes, including drug crimes."

In the meantime, Thailand's jails grow ever more crowded. Corrections department figures for July showed a prison population of 321,347, with around 70% jailed for drugs offences.

"The situation has approached a noticeable crisis point," said UNODC chief Douglas. "The reality is that talk has not yet moved to action and the prison population is still growing." 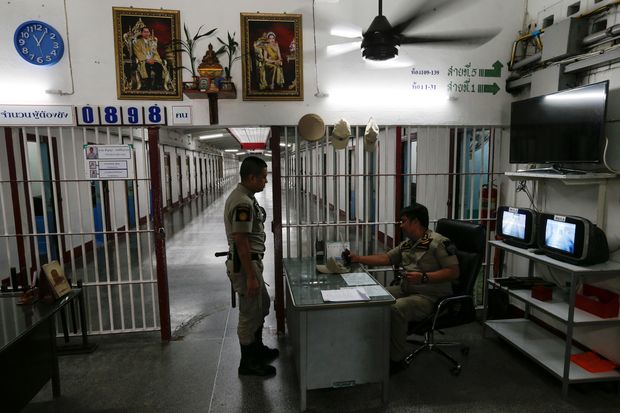