Fall of a forger: 'The Doctor' behind the Thai passport trade
World

Fall of a forger: 'The Doctor' behind the Thai passport trade

A mugshot of Iranian passport forger 'The Doctor' Hamid Reza Jafary, left, displayed with his cohorts at the Immigration Detention Centre in Bangkok on July 22, 2016. AFP photo)

For a few thousand dollars "The Doctor" opened doors to the world, supplying pristine fake passports to gangsters and rebels, refugees and migrant workers -- all from an unassuming, scruffy house in the Bangkok suburbs.

But this Iranian master forger now languishes in a Thai jail after a rare slip unspooled a criminal enterprise that helped thousands of people to sidle into Europe and beyond.

Last week Thai police said they had finally dismantled his network following a five-year probe, dealing a hammer blow to a gang that supplied "Triple A" quality forgeries to global trafficking syndicates.

Nine men have been arrested, returning the spotlight to Thailand's key role as a global hub for fake passports, a shadowy industry dominated by highly skilled Iranians and Pakistanis serving customers from South Asia, the Middle East and further afield. 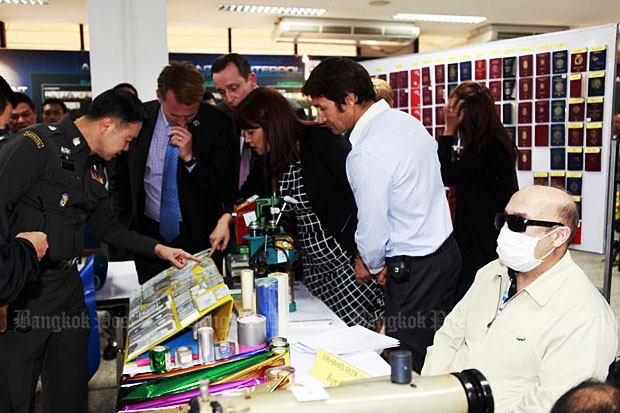 Police and staff from various embassies examine equipment used to produce fake passports after a passport counterfeitng gang led by Iranin Hamid Reza Jaffary (right with face mask and sunglasses) were bust at a media briefing at the Immigration Bureau on Feb 9, 2016. (Photo by Apichart Jinakul)

For years detectives had hunted The Doctor, a name revered among Bangkok's criminal underworld for producing the most sophisticated forged travel documents on the market for just $2,000 - $3,000.

But Hamid Reza Jafary, 48, evaded arrest, cocooned from the law by a network of five trusted Pakistani lieutenants and a low-key lifestyle that belied the fortune spun from his unique skill.

His luck ran out in February this year when police intelligence officers traced a call by the hyper-vigilant forger to a pizza company.

Police swiftly raided an unassuming address in Muang distirct in Chachoengsao where they found The Doctor -- a soubriquet drawn from his past as a nurse in Iran.

Also there, hidden in a secret compartment, were 173 passports from France, Israel, New Zealand, Iran and Syria and a cache of electronic chips, moulds for visa stamps, ribbons, inks and specialist printing equipment.

The bookish, balding Jafary quickly confessed to his crime and explained how made-to-order passports were sent via DHL or FedEX to overseas clients, including Syrian refugees trying to enter Europe.

But he refused to serve up his accomplices or reveal where the money went.

"He told me 'it's a game.... police chase the bad guys, the bad guys run. But this is game over'", Pol Col Voravat Amornvirat one of Thailand's top immigration detectives told AFP.

Jafary was jailed in May for 23 years, but his jail time will be halved due to a guilty plea.

The Syrian migrant crisis has brought a deluge of work for Thailand's forgers.

Over the years they had also served fugitive criminals and even wanted rebels, such as Tamil Tiger cadres escaping Sri Lanka.

But punters never met The Doctor.

"It was like a company... they had brokers and customer service people. The Doctor was at the top -- but he was very low-key, he hid himself very well in the country," immigration police commander Pol Lt Gen Nathathorn Prousoontorn told AFP.

The colourful cabal of crooks arrested from his group were key facilitators for Bangkok's sprawling underworld.

They include a pony-tailed Pakistani craftsman called Mahammad Ramzan -- known by the alias "Jonny Painter" for his sideline as a Bangkok street portrait artist. 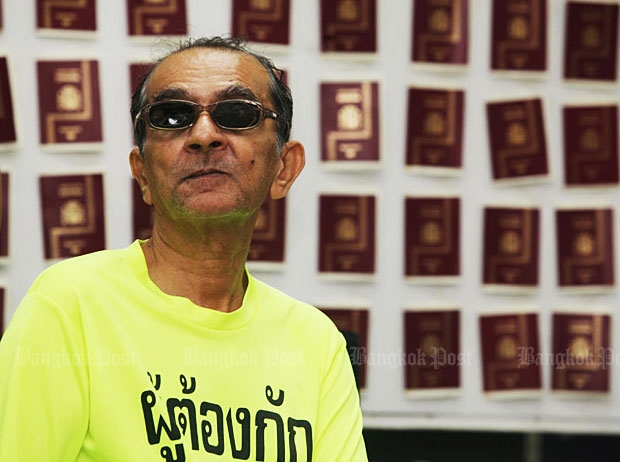 One of Jafray's associations, Abdullah Ghani Bhori, above, appears at a media briefing at the Immigration Bureau on July 22, 2016, along with seized fake passports. (Photo by Apichit Jinakul)

His compatriot Abdullah Ghani Bhori, in his late 50s, was paraded in front of the media last week, alongside more than 250 fake Spanish passports and chemicals, visa stamps and laminated sheets for passports.

Officers said he had changed his identity so many times over the years that he is now only really known by the nickname "Babu".

"I learned this skill in Thailand 10 years ago," the diminutive and frail Babu told AFP, before being led away. "Now it is finished for me."

The links to Pakistan and the Middle East have caught the attention of foreign agencies fearing high end passport forgeries will fall into the hands of Islamic State terrorists.

One of Jafary's group is set for extradition to France, where a French embassy security expert in Bangkok said he is wanted for links to unspecified "terrorist groups".

Transient, vast and permissive, Bangkok has for long provided sanctuary for people wanting to disappear or re-invent.

That draws transnational criminals moving everything from people and rare wildlife to drugs, weapons and gems.

In 2014, two European passports stolen in the kingdom were used by Iranians who boarded Malaysia Airlines flight MH370, which disappeared en route from Kuala Lumpur to Beijing.

Four years earlier, two Pakistanis and a Thai woman were arrested on suspicion of making false passports for Al-Qaeda linked groups, including those tied to the 2008 attacks in Mumbai and the Madrid train bombing in 2004.

Police say The Doctor's downfall has winded some criminal networks. But only temporarily whilst gaping holes remain in the detection system.

Thailand does not check passports against Interpol's stolen or lost passport database which registers tens of millions of documents.

If it was, "we would know immediately," when a stolen document was presented at a Thai border, Pol Maj Gen Apichart Suriboonya, head of Thai Interpol told AFP.