Salt industry prepares for a shake-up

In the midst of a price slump and declining interest in farming, producers are struggling to stay afloat

A female worker walks past a large field carrying salt in a basket. In the background, fellow workers are busy loading farmed salt into baskets. Large grains of sea salt are harvested and carried by the workers. (Photos by Phongthai Wattanavanitvut)

For such a freely available and abundant substance, salt has played a vital part in momentous occasions, such as the Gandhi-led independence movement in India, and is acknowledged in a host of idioms and metaphors. Its indispensability as a seasoning agent is culinary history.

Salt is pretty much taken for granted in Thailand where it is widely available. But maybe not for much longer.

For decades, sacks of salt for sale have been a familiar sight along the sides of major roads, especially Rama II Road in the provinces of Samut Sakhon and Samut Songkhram which are renowned for sea salt farming.

Salt is easy to come by and cheap in local stores and supermarkets. It is never in short supply. However the majority of us have little idea that salt farming is now regarded as a sunset business.

As the country modernises and easier jobs beckon to their children, salt farmers are finding there is no one left to carry on their business.

Some have decided to try to stave off the inevitable by creating a knowledge centre to educate people about this little-known and often-overlooked profession. At the same time, they are exploring ways to create demand for salt to ensure the industry's survival. 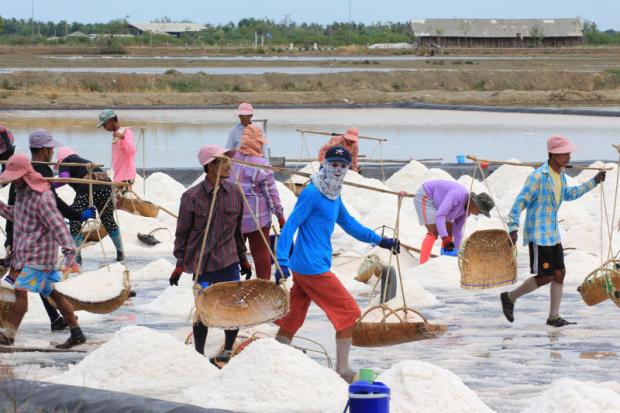 The salt is moved from the fields to a storage shed before it is packed for sale by the roadside.

Three years ago, Thailand Knowledge Park (TK Park), a state-owned educational complex, joined with Samut Sakhon city hall in holding the "Salt Route at Samut Sakhon" exhibition. The purpose was to highlight an essential farming practice which has put food on the table for hundreds of families for decades.

Information from the exhibition has now been transferred to the TK Park website which educates the reading public about the salt-producing industry and its place in society.

Samut Sakhon is a leading province in sea salt farming. According to a survey in 2011, 12,572 rai of salt farms were being run by 242 families in Samut Sakhon, while 4,535 rai was farmed by 111 households in nearby Samut Songkhram and 9,880 rai by 137 families in Phetchaburi. Current figures are not available, but industry sources say the farms are shrinking fast.

The three Central Plains provinces are situated along the Gulf of Thailand. The topography allows for the harnessing of tides to produce the iodine-rich salt.

More than 90% of salt produced there is used in industrial businesses such as caustic soda for cloth dying and bleaching, paper pulp and plastics, metal melting as well as fisheries. Only about 10% is turned into table salt. 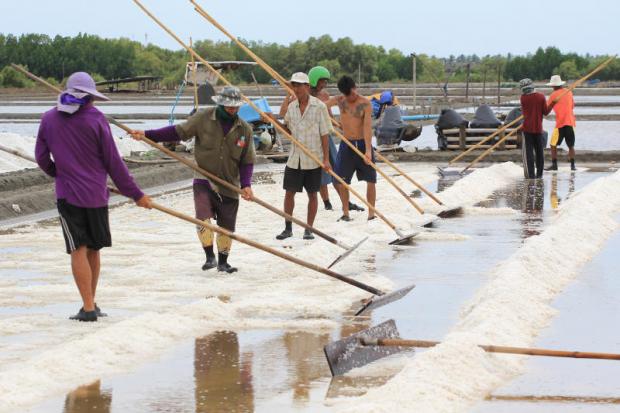 Farmers work in the fields to rake salt into piles before it is carried in baskets out to be packed and delivered to customers. The top soil is also compacted with the use of a machine for sea water to be pumped in. 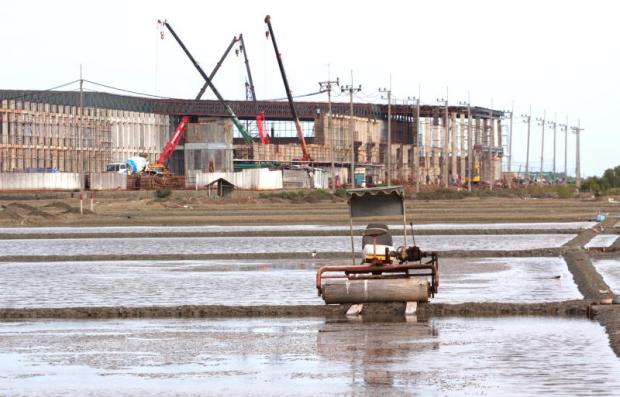 But the farms are dying as young people turn their backs on this traditional occupation and take jobs elsewhere. This shift has forced many farms to employ migrant workers who are paid lower wages.

The abandoned salt fields are developed for warehouses, housing estates and restaurants.

At 57, Ubon Suasri has spent his life in salt farming in Samut Sakhon, learning techniques from his parents. He manages water irrigation of the fields, which requires a great deal of expertise to ensure correct salinity and high-quality salt.

If the salinity is too high, the sea water crystallises into Epsom salts which is used in drug manufacturing. Conversely, proper crystallisation will not occur if salinity is low.

Mr Ubon said salt is normally farmed once a year, starting in September after the rainy season, and will last about seven months until May the following year.

After a crop is harvested, the farmers clean the fields and tamp down the top soil to prevent water filtration during crystallisation. Then sea water is pumped into a well to await release into the first salt field called na prathieb, where it heats up in the sun and the salinity level is adjusted to between 6 and 7 degrees, which is the gauge for saltiness. 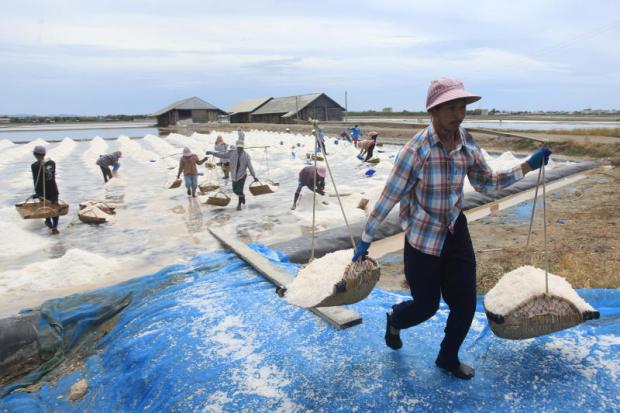 Salt farms are divided into various plots to ensure separation of substances such as gypsum which is crystallised and left behind in the early stages.

Salt harvesting is done in January, Mr Ubon said, adding the business turns a profit when the salt is farmed over at least 25 rai.

Compared with paddy fields which require a large volume of water, drought is a friend of the salt farmer, Mr Ubon said, as the longer dry weather continues, the higher the yield and the finer the quality.

Each farm is allotted a clear division of labour, and is paid a lump sum at the end of the harvesting season.

Workers who oversee water management receive a lump sum of 70,000 baht while the soil compaction workers are paid 30,000 baht. 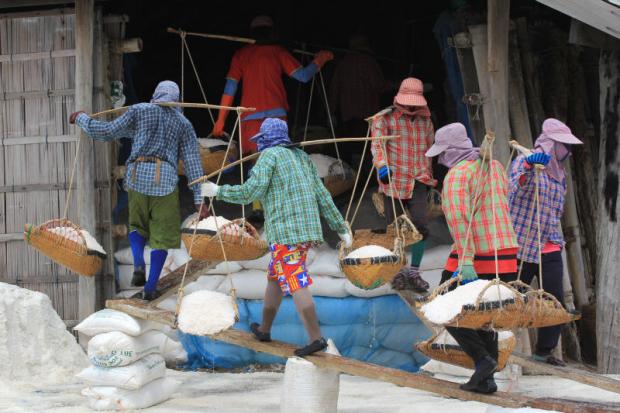 Other workers rake the salt into piles and are paid 2,500 baht per rai, while workers who collect salt from the fields and deliver it to the barns get an average of 180 baht per cart.

Ler-phong Junthong, 60, owner of a salt field and chairman of the Salt Farming Cooperative in tambon Khok Kharm in Samut Sakhon's Muang district, said besides producing salt, he runs a salt-farming knowledge centre. One by one, his salt fields have closed down over the past three years as young people turn their backs on farming.

He said he plans to use his farmland as a vehicle to pass on information and first-hand experiences relating to salt making for local farmers, students and anyone else who is interested.

Part of the reason for the slump in the industry is the government's crackdown on illegal fishing which has grounded many trawlers. That has reduced the demand for salt which the boats use in large quantities to help preserve the marine animals they catch.

Praphon Thetpan, 61, who has sold salt on Rama II Road for more than 30 years, said prices vary according to the weather each year. 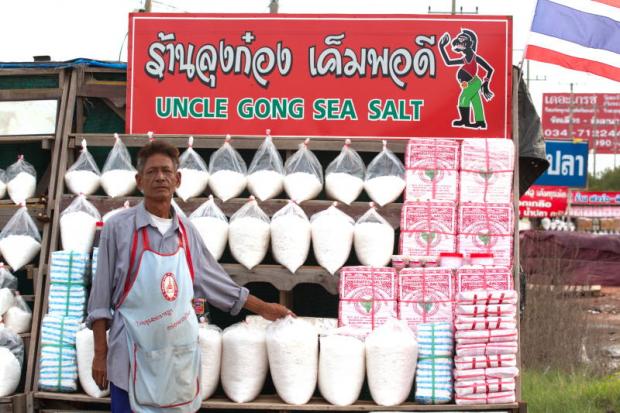 Inferior quality salt residue fetches 30-40 baht per sack. It is used mostly for fermenting and preserving fruits to enhance flavour.

The farms also harvest the top-grade dok kluea (flower of salt or fleur de sel) and sell it at 20 baht per kg. The salt is a highly sought-after ingredient in gourmet dishes due to its smooth flavour.

Mr Praphon admits he is concerned about his future. This year has been particularly tough for salt farmers as prices for commercially-farmed salt have dropped to 500 baht a cart, following the illegal fishing ban.

The minister said new ideas were needed to link the salt industry to health tourism where spa treatment programmes might be designed which incorporate the use of salt.

Strategies have been floated that would see more resources put into salt research and development; boost the image of salt as a useful and valuable commodity; creating awareness of its benefits; and providing workshops on product packaging for salt makers, which will involve them attending leading product exhibitions.