My mother, my hero, my quest
Thailand
Special Report

My mother, my hero, my quest

THE BIG PICTURE: Karin 'Bam' Stowe holds up a photo of his mother, Mary 'Anong' Stowe, right, and her twin sister. He is on a quest to connect with his mother's Thai family, who he has never known. (Photos courtesy of Karin Stowe)

Ever since he was a boy, Briton Karin "Bam" Stowe was fascinated by the stories his mother told him about growing up in Thailand and her time as a resistance fighter during World War II.

When there was a family gathering, Mary "Anong" Stowe never missed an opportunity to recount her memories to her six adopted children of life in Khon Kaen. Sometimes she also touched on her adventures during the turbulent eras in Malaysia and Singapore in the 1950s and '60s.

Growing up mostly in the rural village of Catisfield in Hampshire, it must have been difficult for the Stowe children to fully understand life in rural Thailand. Anong was the oldest of 18 children in the family, along with her identical twin sister.

"She told us how she took care of all her siblings when her parents went out to work," Stowe, 47, told Spectrum.

"She cooked for them and walked a long way every day to get clean water for her family. She did everything to earn money to support her family."

Anong passed away in 1991, but the stories stuck with Stowe, an award-winning documentary filmmaker and photojournalist, and he wanted to fill in the gaps in his mother's life story. Little was known about her early life in Thailand apart from her anecdotes. Anong had not had contact with her Thai family in 45 years when she died.

Stowe and his siblings wanted to know how she had gone from a Thai country girl to marrying a British navy officer and living in the United Kingdom.

But most of all, Stowe wanted to find out more about his mother's twin sister and whether or not she is still alive.

"She always wanted to be cremated back in Khon Kaen where her family is," Stowe said of his mother's dying wish. "But she didn't get her wish fulfilled since she had no clue where they all are."

Stowe, who also lectures at the University of Winchester in the UK, is now travelling in Thailand and the region trying to put the pieces of the puzzle together.

In 1999, his curiosity piqued, Stowe went to the family home in Catisfield and rummaged through some of his late mother's stored boxes.

He found files and documents which confirmed some stories she had told them, but also raised serious doubts about his mother's origins.

Anong and her twin sister were the main supporters of the family. Both came to Bangkok in 1946 to work and send money home. For some reason, the sisters were separated a year later. Anong told her children after her sister returned to Khon Kaen, she joined the Thai resistance which opposed the Japanese in World War II.

She also said that in the 1950s she joined British forces fighting against the military arm of the Malayan Communist Party during the Malayan Emergency which went from 1948 to 1960. Malaya became Malaysia in 1963, when the British territories in North Borneo and Singapore were granted independence and formed Malaysia with the peninsular states.

Anong told her children she joined the Malayan police force and married and later divorced a local man. She met John Harold Stowe in 1955, a British navy officer who was stationed in Malaya. They later married and lived in Malaya for two years, adopting four girls as Anong was unable to have children.

The family moved to Singapore in 1957 where Anong landed a job teaching Lao and Thai languages to British navy officers. Malayan independence from the British Empire was declared on Aug 21 of the same year, after legislation was passed in the UK parliament.

The Stowes lived in Singapore until 1966 before they moved back to England and adopted two boys, one of them, Karin, in 1969. The family went back to Singapore in 1969 where they stayed until 1975 before permanently returning to England.

"That was the last time my mum got to see Asia," Stowe said. "Though she moved back to the UK, her heart was always in Khon Kaen where her family is."

Of his mother's "fighting past", Stowe said she was a quiet person when it came to this aspect of her life. "I assume she was quite traumatised from the whole experience," he said.

But the most troubling documents found in the boxes were passports and papers identifying Anong by different names, such as "Anonglak" and "Nong Lak" and referring to her name as Lao. One document said her birth name was Anonglak Prasit Kane.

Stowe said the passports were the "big reveal" in the boxes. "It's a tangled web, that's what makes it odd and interesting," he said. "But imagine trying to explain it to authorities."

Stowe says Anong was a loving mother to all her adopted children. But when they returned to the United Kingdom she had to go through many difficulties, including racism.

In 1960s Britain, multiracial couples were still largely considered a social taboo. Stowe said from what he observed she was one of only a few Southeast Asian women married to Englishmen. Tolerance in the UK at that time wasn't high, but they managed to get through the challenges and moved on with their lives.

"My mum is a true hero for me," Stowe said. "She didn't care what other people thought. She just took care of us. I grew up in a true multicultural environment. We were taught to see no colour in people. We are what we are. The most important lesson my mum taught me was we are all equal as human beings."

The four adopted Malaysian women are all Muslim and were encouraged by both parents to continue practising their faith. Stowe's brother Anthony is a Roman Catholic, like his father, while Stowe says he is a Buddhist, like his mother.

Stowe says while his mother was happy with family life in England, the children always sensed a sadness within her. They believed this was due to the separation from her family in Khon Kaen.

Her last wish was to be cremated in a temple back in Khon Kaen and be surrounded by her siblings.

"My mum was diagnosed with diabetes in 1988," he said. "After that her health was really poor. It was hard for her to plan to come back to Thailand. Then in 1991, a heart attack took her life. I feel very sad that I couldn't make her last wish come true."

Stowe said his father also became deeply depressed about his inability to fulfil his wife's final request. In 1994, he also died from a heart attack and was buried beside his wife in England.

Stowe said prior to his father's death he asked him about his mother's life in Thailand, but he only recounted more details of her actions fighting the Japanese and the Malaysian communists.

Even though Stowe is not Anong's biological son, he has a strong bond with her and feels part of him is Thai. He wants to keep the connection, despite his mother passing away.

After he found the documents in 1999, he travelled to Thailand but could not find any records of his mother's past. At the time, he believed this may have been because of the different spelling of his mother's name and problems dealing with local bureaucracy. He hired a detective who also failed to make any progress.

On his current trip, he has brought along his mother's old passports. But when Stowe went to check her registration record, he found the system doesn't go as far back as 1920.

In 1956, family registration became a requirement and in 1982 a computerised national identification card system was instituted to centralise data on all individuals. The issuance of birth certificates in Thailand began in Bangkok in 1917. But birth records for people born in Bangkok before World War II and in rural areas up until the 1970s are often lacking.

In his search, Stowe has also travelled to Vientiane in Laos to conduct a similar paper chase in a bid to find more clues about his mother's family.

"There has always been a lot of confusion when it came to my mother's story," he said.

"She never had any official paperwork. No birth certificate, no documents that defined her family name or her father's name officially.

"The information I have is all from passports and the odd record that my father filled out on her behalf."

He said the cultural complexity of Isan and its people made him believe that his mother "thought of herself as Lao and Thai but was born in Khon Kaen".

Stowe says an important part of his quest is to find Anong's Thai family and tell them what happened to their relative who disappeared 70 years ago. He believes they have a right to know what she did with her life in the intervening years.

"This inspired me to become a human rights filmmaker and photojournalist," he said. "She was our family's hero, we'd like to tell the world her great story and also tell her family of the person she was and maybe find out who she was before she left Thailand."

In his reaching out to the public to solve the mystery, Stowe believes two of the best pieces of "evidence" he has is an old black and white photo of his mother's twin and another colourised photo of an Asian man found in the boxes. If the twin sister is still alive, she would be 90 years old.

Despite their parents having passed away, the Stowe children want closure on their mother's past which would also open more doors to their Thai heritage.

"We will feel so much better to finally get to solve our mum's greatest mystery," he said. "I will stay connected with my mum's family if I find them as I feel a strong connection between me and my mum. Her family is also my family, and I want to find them so that she can rest in peace." n

If you know anything about Anonglak Prasit Kane or Mary Stowe and her family, please contact Karin Stowe at bamakure@gmail.com. 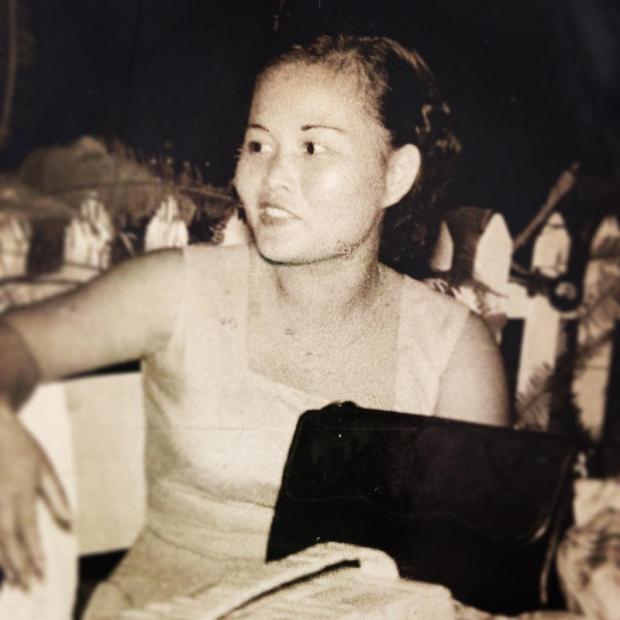 FAMILY TIES: Anong in Malaysia in 1958, during the Malayan Emergency, above. A photo of a man who could be Anong's father, below. 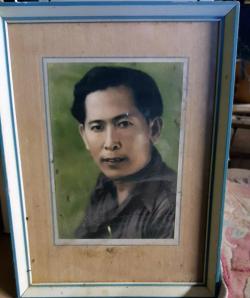 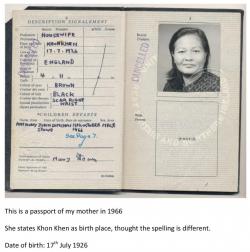 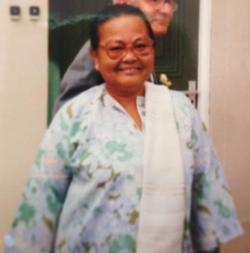 LOOKING BACK: Anong at 63 years old. Later in life, she dealt with diabetes. 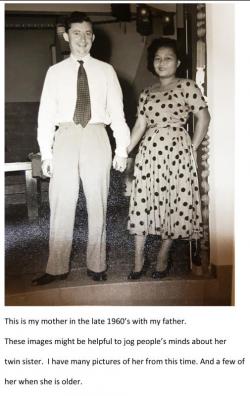 OLD LOVE: Anong in the 1960s with her husband, John Harold Stowe, a British navy officer. They met in 1955 when stationed in Malaya. 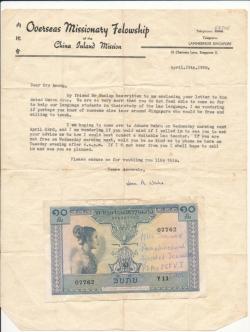 MYSTERIOUS TRACES: A letter for Anong, with an unrecognisable address