They have been used to eat corpses and are a byword for villainy, but the maligned water monitor has untapped commercial potential

'They are disgusting, they scare me, they hurt with their deadly saliva, and they destroy the trees." These are among the seemingly endless complaints made against water monitor lizards by the many people who use Lumpini Park for workouts and recreation. After extensive complaints, the Bangkok Metropolitan Administration decided to remove the "uneasy on the eyes" animal from the park last month.

Though Lumpini Park has been their home for several decades, up to 80 monitor lizards were relocated so park users can feel safer. They are now living at a breeding centre in Ratchaburi province, packed together in ponds with other lizards.

The lizards, known as hia in Thai, are not beloved in Thailand. Their name, which doubles as a swear word, and a swarm of superstitions have given the animals a bad reputation. But little is known of the lizard's positive contributions to the environment and the economy.

Accessories made from the water monitor's skin are among the fashion world's most expensive products. But while top fashion labels eagerly seek out the skin to make their bags, shoes and belts, Thai people refuse to regard it as a luxury item. The water monitor remains deeply stigmatised, a fact driven by a set of long-standing cultural beliefs.

When Rungamporn Pramapong, a legal adviser for a world-renowned fashion label, first checked into the legality of importing a monitor lizard skin bag from Italy, she discovered that the animal was listed as a protected species by the Department of National Parks, Wildlife and Plant Conservation.

Out of curiosity, Ms Rungamporn began researching the topic. She discovered selling monitor lizards for commercial purposes was legal in Thailand, but only under strict conditions.

Still, she wondered why Thailand largely discouraged the practice while other regional countries could do it easily.

Ms Rungamporn is now researching the monitor's commercial potential in Thailand as part of her master's degree, drawing on her passion for fashion and law. She has identified the main buyers of water monitor skin products as Chinese and European.

Of Thailand's Southeast Asian neighbours, Indonesia ranks as the number one exporter of monitor lizard products, such as bags and shoes. The second-biggest Asean exporter is Malaysia.

"The skin of water monitor lizards is unlike any other kind of animal skin," Ms Rungamporn explained.

"It has a unique pattern with impressive detail. Even crocodile or snake skins don't have this much detail.

"I want Thailand to pass a law to allow people to farm the water monitor lizard commercially. We have enough knowledge to do this. All we need is some more research to confirm that it can be done commercially like pigs, cows or crocodiles. It's valuable and it will definitely boost the economy if we can sell it commercially."

Located in Nakhon Pathom province, the Kamphaeng Saen campus of Kasetsart Univeristy has over 7,000 rai of land with green space, clean air and ponds that give the water monitors a clean environment to inhabit. 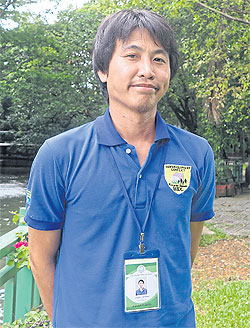 SUPERVISING SPECIES: Rujira Mahaprom, a researcher from The Zoological Park Organisation under the Royal Patronage of His Majesty the King.

The former rector of Kasetsart University, assistant professor Wutthichai Kabinlakan, notes that the school's water monitors have never dwindled in number. The school's involvement in agricultural studies and research allows the lizards to easily track down food at every corner of the campus.

Still, they ran into problems. The lizards became overpopulated and ate excessive amounts of other animals and plants. So Mr Wutthichai began to think about how to better manage the problem. He decided to raise the lizards on a farm where researchers could study and breed them in a more contained environment.

He was aware that lizard skin was a hot global commodity and began a research centre that focused on how to fashion it as a marketable product in Thailand.

In 2011, he founded the Varanus Farm on 1.5 rai of land, where the compound is divided into 60% land and 40% water. The farm is fenced off with roof sheeting to prevent the lizards from climbing over or digging under the water to escape.

Mr Wutthichai submitted a request to the DNP and was granted permission to run the centre purely for research purposes.

The centre had 80 lizards to begin with. They were fed fresh chicken daily and appeared to grow bigger than the lizards that live in the wild. However, it seemed the population was too crowded to breed naturally as the researchers failed to find any new eggs.

When the adult lizards died of natural causes, researchers skinned the body and used the skin to make fashion accessories. One lizard skin bag is priced between 30,000 to 50,000 baht, and one belt costs 3,000 baht.

"They have such high-quality skin," said Kriangsak Saardrak, a researcher at Kasetsart University's department of animal sciences.

"Crocodiles are social animals and always fight for social status, but monitor lizards are the opposite.

"They don't socialise with each other. Therefore, they don't fight and their skins remain in perfect condition until they die."

Each lizard's skin has its own texture and pattern, making it a one-of-a-kind material. Its unique character has made the skin a highly valuable commodity.

Many Chinese and Taiwanese businessmen approached the centre about investment opportunities, but the law prevented these proposals from going any further.

In 2014, the research centre was closed down due to university budget cuts. When the former rector retired, his successor decided not to continue the project.

Though the research has lost funding, the lizards remain at the farm. The farm's population today is 30, and they have begun laying eggs in the compound.

Mr Kriangsak, who tends to the lizards, wishes they could resume the programme. The knowledge and technology is available for export to other farms interested in breeding water monitors.

One strange and persistent belief is that the water monitor is a jinx. Many people believe bad luck will come their way if they are visited by a hia at their home, or even if they see one in the street. The word hia has become synonymous with "jinx" and "villain".

Winai Phu-numphon, an arts and history professor, has traced Thai people's beliefs about the lizard through time. He said water monitors were once used for sanitation purposes. For example, during the Rattanakosin period they were sent to consume human corpses and animal carcasses.

Monitor lizards showed a tendency to eat anything available to them. Besides corpses, they also enjoyed eating snake eggs, which allowed them to control the snake population.

In the past, people who lived in the royal palace enjoyed consuming monitor lizard eggs since they believed it could boost their immunity as well as their sex drive.

At first, people didn't seem to be scared of them. Sometimes, they stole food, but they never hurt people.

Under King Rama III's rule, a wave of Chinese migrants came to live in Siam. One of the most popular businesses among Chinese immigrants was sugar production, which meant growing sugar cane.

When the government decided to raise the sugar tax, Chinese sugar producers were angry. They rebelled by killing their town governors.

These rebels called themselves "tua hia", which means "big brother" in Chinese.

When Thai people got word of the killings, they were upset. They began to call the killers the same name, but with a different intonation that sounds like the Thai word for monitor lizard.

Since then, the word has retained a negative connotation.

"This is why Thai people don't like hia," Mr Winai said. "It was something that happened in the past and no one seems to want to find out why the negative attitude attached to the word is carried on. Language is a very powerful tool that shapes the way people think.

"The hia is a peaceful animal and they have never been harmful to people."

As a protected species, treating the water monitor as a commercial good is largely off-limits.

So while Kasetsart University initially received permission for its research centre, it was still not allowed to sell any of the products they created.

Mr Kriangsak told Spectrum that their meat is edible, so there are potential culinary uses. Water monitor meat is considered high quality since it has no cholesterol, and it is healthier than pork and beef.

"People tend to think that their saliva contains a lot of deadly bacteria, but they don't have any more bacteria than pork or beef do," Mr Kriangsak said.

"The flesh that is normally eaten is around the tail area and has a lot of meat. Thai people still don't see and accept it as food, but I know it is safe and healthy."

With a lack of existing research on water monitors, the population of the species as a whole is unknown. Some estimate there were at least 400 living in Lumpini Park alone before last month's relocation.

Rujira Mahaprom, a researcher from the preservation unit of The Zoological Park Organisation under the Royal Patronage of His Majesty the King, is one of few researchers focusing on the lizard.

In his research, he found that Thailand exported monitor lizard skin from 1967 to 1982, but has stopped since.

This gives it the potential to be among the world's leading exporters of lizard skin products.

In her research, Ms Rungamporn found that leading fashion labels can help boost monitor lizards' popularity. While Thai people might remain sceptical, those from other countries could still be attracted to the product.

Like any other commercial animal in Thailand, the lizard seems to be thriving in numbers. But they could also become extinct if they aren't managed well.

Mr Rujira said Thailand should legalise lizard exportation, but it should still be carefully controlled.

"The government allows the hunting of animals that are overpopulated, like America does with deer," Mr Rujira said.

"But before they did that, they did research on how many there were and how many they were allowed to hunt each year. If we have proper animal management, we can do a lot more with the lizard.

"They normally lay 30 to 50 eggs at a time and it takes eight to 11 months for them to hatch. The lizard, at the age of two years old, is considered fully grown and we can use their skin at that age.

"I can see that the lizard could really stimulate our economy but we have to learn to manage them wisely first. Otherwise, they will be extinct." 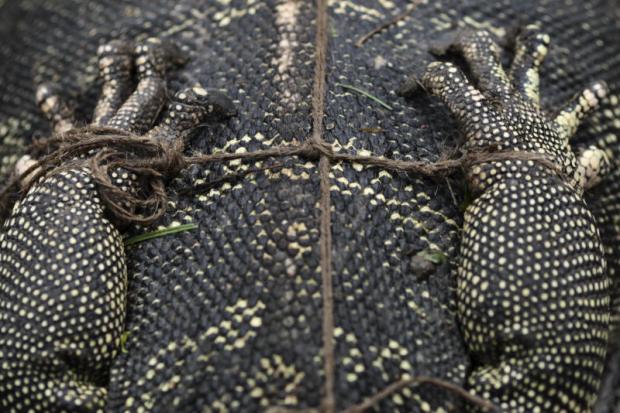 BOUND UP: A monitor lizard is captured in Lumpini Park to be relocated to a wildlife station last month. There were an estimated 400 lizards in the park before about 80 were relocated. 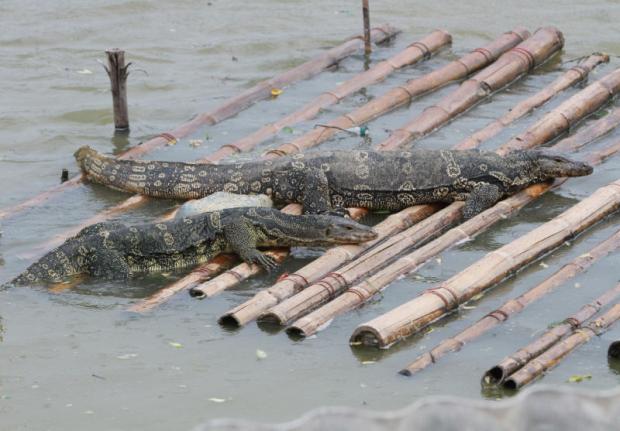 FLOAT ON: Monitor lizards at a farm in Kamphaeng Saen district in Nakhon Pathom province. Kasetsart University set up ample green spaces and ponds for the lizards to thrive, above and below. 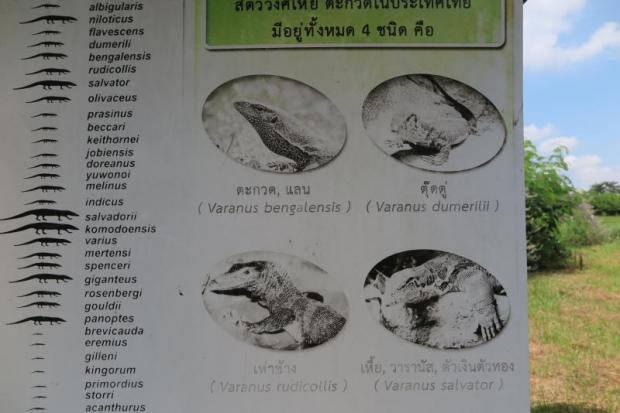 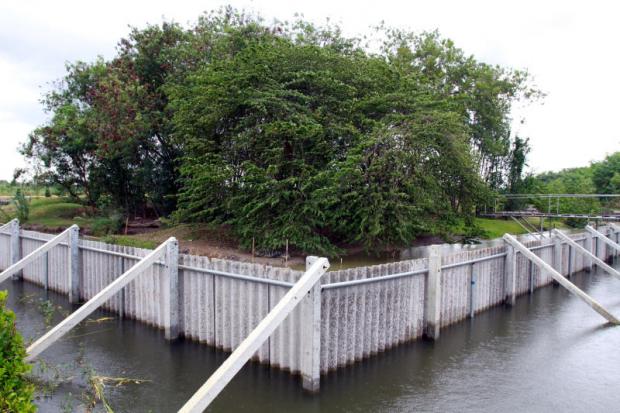 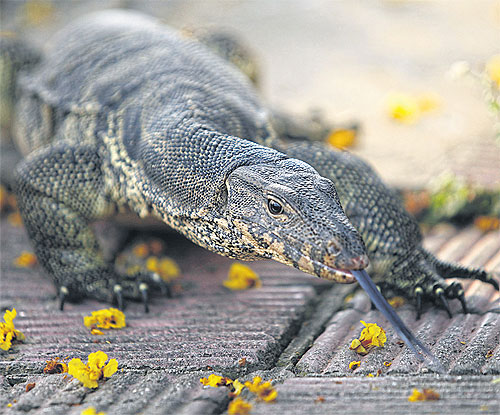 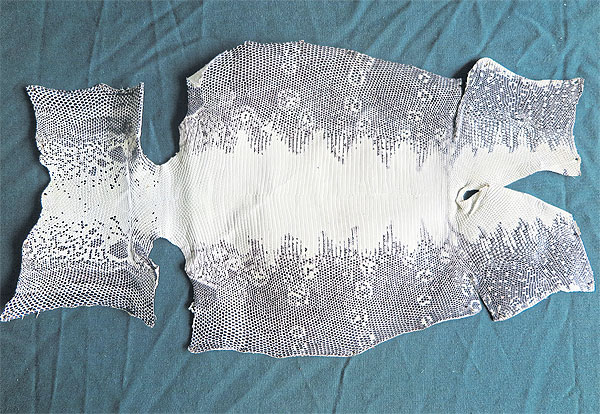 THICK SKIN: The unique texture and pattern of monitor lizard skin has placed it in high demand among fashion designers, although many Thai people do not see its value or potential as a luxury commodity. 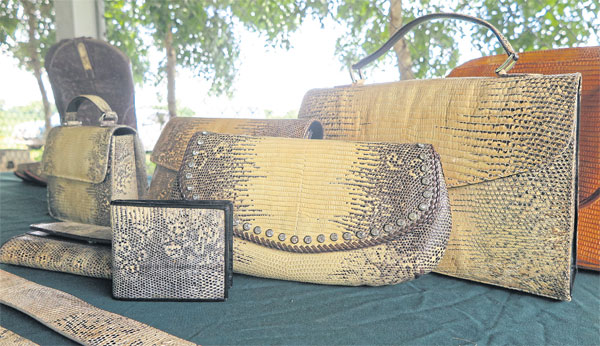 IN FASHION: Monitor lizard skin is largely banned from commercial use in Thailand, but it can reap big profits, with bags being priced between 30,000 and 50,000 baht, and a belt costing 300 baht. 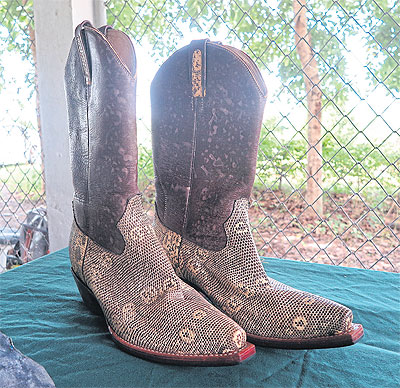 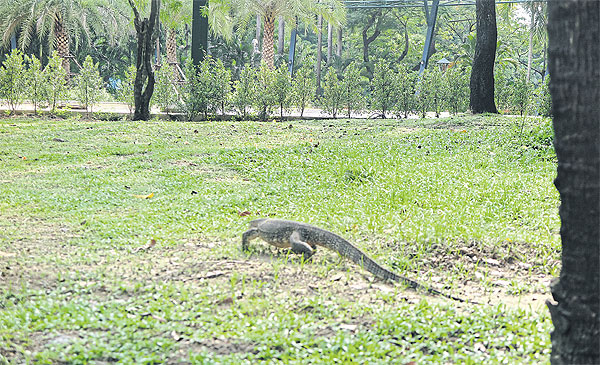