A tale of fish and monarchs
Thailand
Special Report

A tale of fish and monarchs

Their Majesties the King and Queen talk with His Imperial Highness Prince Akishino of Japan at Siriraj Hospital during the prince's visit to Thailand in March 2011. (Photo courtesy of the Royal Household Bureau)

Many countries which have a special relationship with Thailand have reacted with sorrow to the passing of King Bhumibol Adulyadej, but none more than Japan where Emperor Akihito and Empress Michiko, much respected by Thais, undertook three days of mourning.

This unprecedented gesture indicated the strength of the friendship of the two dynastic houses -- King Bhumibol and Emperor Akihito in particular -- who enjoyed ever closer bonds over the decades as ties between the two countries grew more cordial and Japan encouraged investment and trade relations.

After the mourning period was announced, a representative of the Japanese royal couple was sent to the Thai embassy in Tokyo to pass on their deepest condolences to Thailand's royal family and the nation.

The relationship between the Thai and Japanese royal families began in the Ayutthaya period, but it flourished during the reign of King Bhumibol and Her Majesty Queen Sirikit who visited Japan in 1963. During that historic visit, His Majesty and Her Majesty received a very warm welcome from then emperor Hirohito, the father of Crown Prince Akihito. The visit was reciprocated when Crown Prince Akihito and Princess Michiko visited Thailand in 1964.

The exchange of visits indicated a growing friendship between the royals who shared a deep interest in agriculture and development. King Bhumibol and Crown Prince Akihito exchanged views on their common interests and the Japanese imperial couple were driven by His Majesty the King himself on a tour to several rural areas in Thailand.

HRH Princess Maha Chakri Sirindhorn presides over the opening of the 2007 HDMR Congress to present developments on the Human-Chicken Multi-Relationships Research Project, initiated by His Imperial Highness Prince Akishino of Japan, to conduct research into local and wild chicken strains in Thailand. Pictured with the Prince and Princess at the Thai Science Park in Pathum Thani were members of the organising committee and Dhanin Chearavanont, president and CEO of CP Group, seated far left, who sponsored the translation of Prince Akishino's book "Chicken and Man". Photo courtesy of the Royal Household Bureau

During the 1964 trip, the Japanese Crown Prince also visited the Fisheries Faculty at Kasetsart University and was informed that the Thai monarch was looking for fish species with high nutritional value and could breed fast to solve the problem of malnutrition among Thais in rural areas.

The Tilapia fish from Japan was the breed that the King had in mind and this was communicated to the Japanese crown prince.

Thon Thamrongnawasawat, a marine biologist and lecturer at Kasetsart University, has described the historic event in his personal Facebook account. Crown Prince Akihito, he said, was an ichthyologist, an expert on fish science and he was invited by His Majesty the King to see the fish species at the Fisheries Faculty. No one could read the King's mind and people who came across the royal itinerary were surprised to see "fish tour" in the schedule.

"A fish aficionado came for a visit … take him to see fish. This was beyond my imagination, given that both the host and the visitor are royalty," Mr Thon said. Emperor Akihito and Empress Michiko with the King and Queen and Royal Family members during a five-day trip to Thailand in 1991. photos by Kyodo News

It also went down in the records at the Faculty of Fisheries' museum that the Japanese Crown Prince was upbeat about looking at various types of fish raised inside experimental bottles.

"One of the bottles contained a goby fish," which is named after the King's father, Prince Mahidol Adulyadej, he said. The Mahidol goby fish was discovered and named by the renowned ichthyologist Hugh McCormick Smith, regarded as one of the best minds in ichthyology.

Quoting from the records, Mr Thon said Crown Prince Akihito exclaimed, "Is this a fish that Dr Smith procured?" as he gazed at the bottle holding the Mahidol goby fish. The famous biologist explained that naming the fish in honour of the King's father earned admiration from the Japanese crown prince.

The words of appreciation from a royal highly regarded as a fish lover resonated and transformed the relationship between the two royal families into a lasting one. 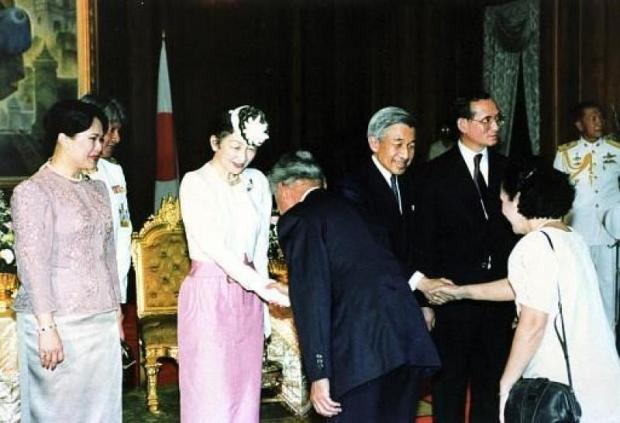 The Emperor and Empress welcome guests at the state reception held in their honour by Their Majesties the King and Queen.

After returning to Japan, Crown Prince Akihito in early 1965 sent 50 Nile Tilapia to His Majesty the King. However, 40 of them died during transportation and the King raised the remaining 10 tilapia at Chitralada Palace.

A year later, His Majesty bestowed the fish with the name "Pla Nil" to reflect the fish's English name "Nilotica" or Nile River fish, before giving 10,000 of them to the Department of Fisheries for distribution to the people.

Since the day the fish arrived in the country, the Nile Tilapia has been a popular menu item among Thais as it can be made into various dishes at affordable prices.

After being informed of His Majesty the King's passing, the Emperor of Japan observed a mourning period for his close friend of over 50 years, Mr Thon said, explaining that the mourning was apparently intended for "a man who achieved the greatest success in matters of fish".

One landmark success is in the breeding of a modest 10 Pla Nil into a commercial production of 220,000 tonnes of the fish per year. 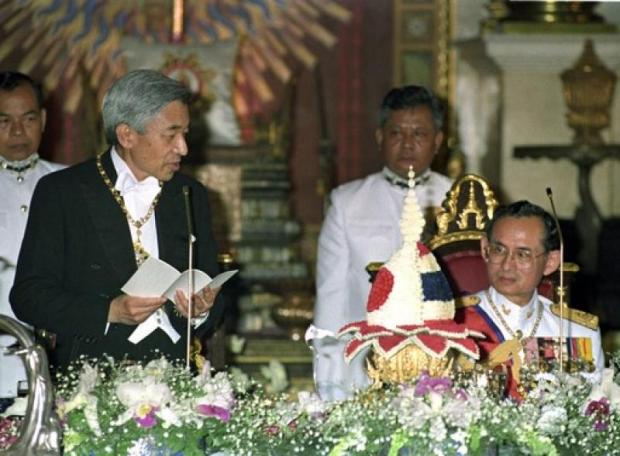 His Majesty King Bhumibol Adulyadej listens to a speech by Japanese Emperor Akihito in Bangkok during his Thailand visit in September 1991.

"This is about bringing 'fish' and 'people' together, as never before," he noted.

After Crown Prince Akihito and Princess Michiko ascended the Chrysanthemum Throne in 1989, they chose Thailand as the first country to visit.

Foreign Minister Don Pramudwinai, who attended His Majesty's jubilee in 2006, said he saw the common ground between the King and the Japanese emperor, especially in how caring they were for their subjects.

Mr Don recalled that, in 2006, he was in a motorcade accompanying the foreign royal families who were heading to the palace. He noticed one of the royal cars began slowing down with hands reaching out of the vehicle to wave to the people along the road, who responded with an overwhelming welcome.

Mr Don said: "I know that the hands waving to people were those of the Emperor and Empress of Japan. This leaves no doubt as to why [the two royal families] are very close".

Prince Akishino has also made a number of visits to Thailand, affirming the bond between the two royal families.

Prince Akishino also has taken a keen interest in fisheries and chicken, and he has conducted research in Thailand, especially on the relationship between humans and chickens. In recognition of his academic capability and the value of his research, the Japanese prince has received several honorary degrees from Thai universities.

Former foreign minister Kasit Piromya, a one-time ambassador to Japan, said there were no doubts about the strength of the relationship between the two royal families over the decades. He said Prince Akishino has made many personal and official visits to Thailand, reflecting the closeness forged through the generations.

"I had an audience with the royal family when I was Thai ambassador in Tokyo. They always asked about the King, the Queen and other royal family members," he said.

Aside from the personal ties, the Japanese and Thai royal families have similar development projects to improve people's lives, Mr Kasit said.

"I myself do not know their Majesties' personal ties. But from my working experience, I can say that the two royal families are truly close," he said.