As Korat cats with signs of mixed breeding are winning international competitions, a Thai association is trying to keep the bloodlines pure.

Panarat Kamchat is determined to correct a misunderstanding about Thai cats after discovering that the winners of some recent international shows were not the genuine breed.

She cited an incident at an international competition for Korat cats, also known as Si Sawat. The winning cat had a round face, was too hairy and had dark green eyes.

Ms Panarat argued that the original Korat cat has a heart-shaped face and shorter grey hair with silver tips at the end. The true breed's eyes are yellow with an inner green circle. 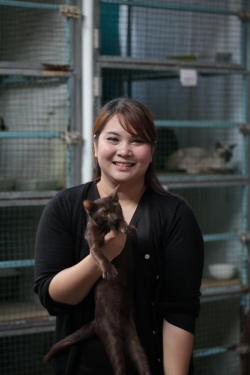 Unfortunately, some cat lovers at the show thought the winning cat was "cuter" even though it wasn't a real Korat cat.

"They may look cuter to them. But it's not a genuine Thai cat," Ms Panarat said. "Some were mixed breeds to fit the tastes of cat lovers. But I want to preserve the original characteristics of Thai cats."

In past years, Ms Panarat has encouraged Thai cat breeders to present their felines in international cat shows. "It doesn't matter if we win or lose. We want to show off real Thai cats."

Ms Panarat is president of The International Maew Boran Association (Timba), formed to provide a registry of and pedigrees for Thai cats and be a voice in English for Thai breeders.

"Farang breeders abroad have taken these cats from Thailand and have manipulated them for their own satisfaction for winning awards," said Nolan Betterley, Ms Panarat's partner who helps her campaign to protect Thai breeds.

"This has been a slow process over several decades, but the end result is horrific.

"If you Google 'Contemporary Burmese' and 'Modern Siamese', you can see how farang have changed these breeds. While the current Thai breeders don't agree with this, almost all of them do not speak English, and farang breeders do not speak Thai."

Ms Panarat and Mr Betterley were not experts on Thai cats until six years ago when they adopted a street cat named Snow because of its white fur. 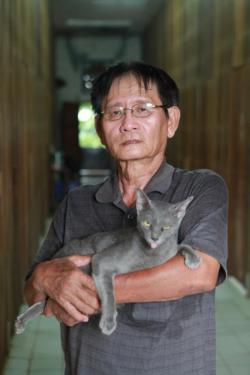 Best of the breed: Chuchai Wisetjindarat, who has been breeding Korat cats for almost 20 years in Phimai district, wants to promote the home-grown felines.

As they found out later, Snow is a Khao Manee, one of the remaining purebred Thai cats. After posting photos of Snow on Facebook, they were contacted by a foreigner who exported Korat cats.

"We then started to learn about Korats. One by one we learned about all the different Thai breeds and discovered there was an incredibly rich history surrounding them," said Mr Betterley.

Researching the breeds was not easy. The couple said they quickly learned that while Westerners had well-documented histories about the breeds within their own countries, there was very little information about the Thai breeders and history within the kingdom.

"It quickly became apparent that the majority of Thai people did not know and did not care about their own national heritage breeds," Mr Betterley said.

"Today the majority of Thai people are only interested in what is exotic. If they are cat people, they are interested in Persians, Bengals and British shorthairs.

"They are willing to spend more than 100,000 baht to purchase these cats."

Through their research, Ms Panarat and Mr Betterley have found that the original Siamese cat breeds have more specific characteristics than what has been generally prescribed by international breeder associations. 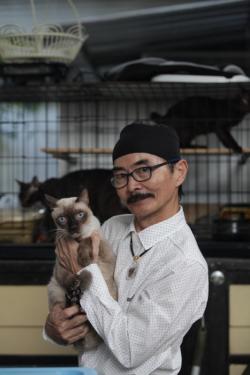 If you please: Breeder Preecha Vadhana with a Wichienmaat or Siamese cat.

However, only four of the lucky ones exist today as purebred cats -- namely the silver-grey Korat, the Siamese or Wichienmaat, the black Konja, the pure white Khao Manee and the uniformly copper-coloured Suphalak.

All of them have been registered by international associations of foreign cat breeders.

Thai cat breeders are planning to register the rare Suphalak breed in the next couple of years when they can produce enough cats to ensure the lineage continues.

"Once it succeeds, it will be the first time that a Thai cat is registered by a Thai breeder," she said.

"We will be able to clearly specify the characteristics according to old Thai scripts which described the cat breed by poem, and were passed on from one generation to another."

Ms Panarat found a small number of Thai cat breeders scattered around the country in the course of her research, while several others had already retired.

"These breeders were not making money, some of them were even struggling to cover costs for food, litter and medications. They were breeding these cats because they thought it was important to preserve them, as a national symbol of Thailand," said Mr Betterley.

Chuchai Wisetjindarat, in his sixties, has been breeding Korat cats in Phimai district in Nakhon Ratchasima province for almost 20 years. Korat cats originated in Phimai.

Mr Chuchai used to breed peacocks until he was convinced by a senior officer in the province to start breeding Korat cats to promote the home-grown felines.

"The Korat cat has been part of our history. Old textbooks referred to the Korat cat for several centuries. Thais used the Korat cat to perform the ritual to ask for rain," he said.

"The Korat cat has to have a heart-shaped face from every angle we look at it. But foreign breeders mix it to have a round face. They change the features of the cat but still call it Korat, which is wrong."

To date, Mr Chuchai's farm in Nakhon Ratchasima has bred more than 50 Korat cats. They are separated by a bamboo partition and a mosquito net door protects the kittens at night.

Mr Chuchai usually checks the health of his grown cats and kittens several times a day.

Pointing to their physique, he said, "They have to be slender and agile. Thai cats are popular because they are intelligent and playful.

"The cat's tail has to be slender. A cat with a crooked tail is considered inauspicious," he said.

"If we keep the heritage of our Korat cats in Thailand, no one will dare change the breed."

The popularity of Johnny Suphalak, the Superstar Cat, on the internet has made Thais aware of Suphalaks, once a dying Thai cat breed. This is despite the fact that local cat experts say Johnny is in fact a Burmese cat. 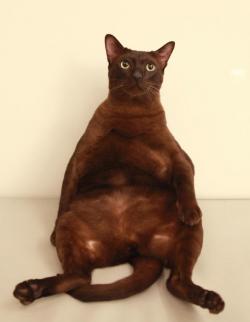 Johnny Suphalak became a celebrity after Kriengkrai Suetrong, his owner, posted pictures online of the cat in costume, mocking prominent figures in Thai society and drawing laughter from his fans.

"I didn't know what the cat was. I adopted him from Nakhon Si Thammarat," Mr Kriengkrai said.

"His mother was a stray. I thought he was cute."

"Uncle Preecha told me that the cat has the physique of the rare Suphalak breed. But Uncle Preecha said he could not say for sure. He said he had to look into it further to be certain."

Coincidentally, a TV camera crew was at Mr Preecha's cat farm when Mr Kriengkrai was showing Johnny to him. The camera crew then showed Johnny the cat on TV, mentioning that it may be one of the remaining small numbers of the Suphalak breed.

"So, I named my kitten Johnny Suphalak because it was a good name," Mr Kriengkrai said. "I really didn't care back then what he really was. I did not raise the cat for breeding. Back then, not many people had heard of the Suphalak cat anyway."

"I was told later that Johnny is not a Suphalak but I did not want to change his name because many people already remembered Johnny from this name," he said.

KEEP IT IN THE FAMILY

Johnny, meanwhile, has nine dark spots on his brownish body with paws a similar colour to mangosteen. Johnny looks more like a Burmese cat.

Despite this misunderstanding, Johnny Suphalak made people more aware of the need to preserve the Thai feline heritage.

She contacted the breeders in her association to see if anyone could find a female for him to breed with.

She went to the farm of an ageing cat breeder who said he could produce a Suphalak cat by matching it with a Burmese cat, which is a close breed. The result of the pairing was a litter of black kittens since the Burmese has more dominant genes.

"Since then, we have learned that we have to use scientific methods to breed pedigrees," Ms Panarat said.

Timba sent Ayothaya's DNA to an American university laboratory in order to test the breed's authenticity before mating it with a female Suphalak named Ayodia from Siamese Cat Bang Rak farm.

"Foreign breeders in some countries want to register Suphalak, but they don't have enough cats," said Ms Panarat.

"We have made good progress."

At present, the number of the total pure Suphalak in Thailand is around 40. "We plan to have at least 200 to show that the lineage of the cats will continue."

Mr Betterley said that meanwhile Thais should try to preserve their felines. "Currently we can still find Thai cats from their natural habitats, and usually in temples. But this won't be true in the future. 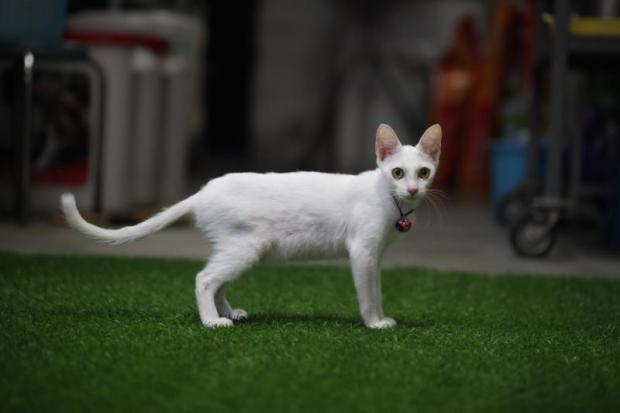 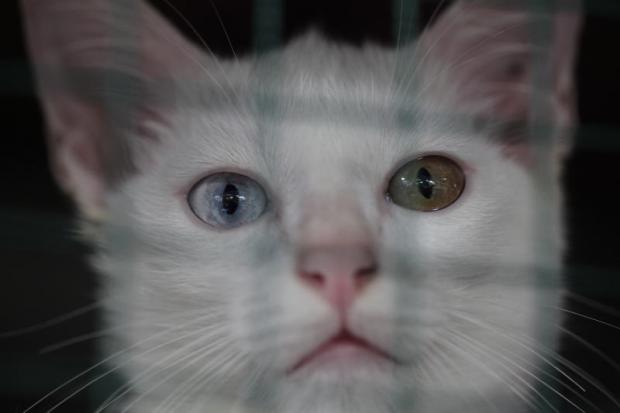 The eyes have it: From left, the Khao Manee, Korat and Wichienmaat cat breeds. The colour of their eyes gives clues about the pedigree of the cat's breeding. 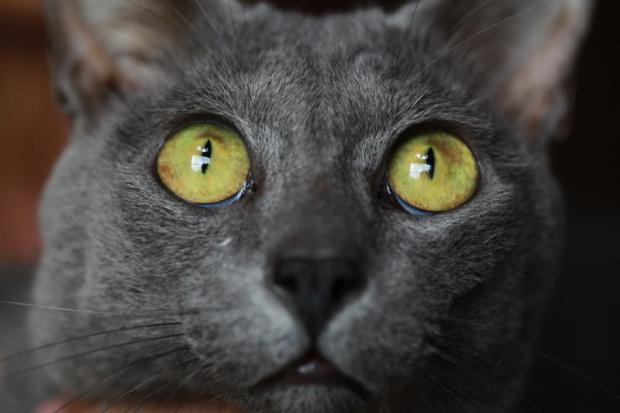 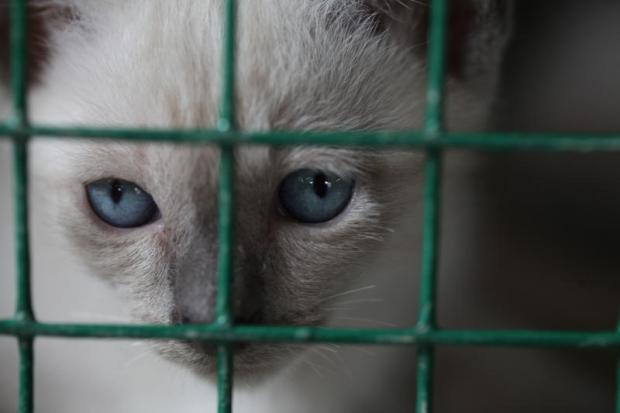 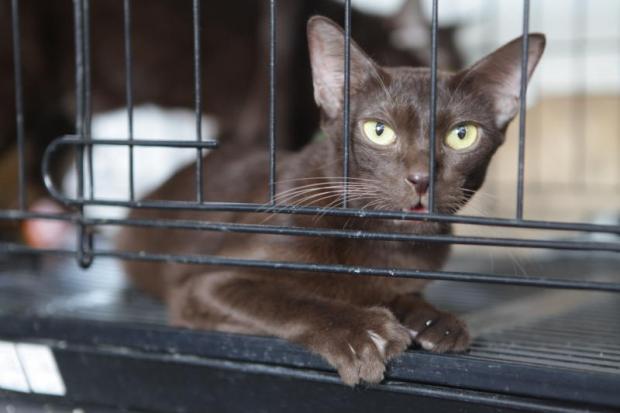 Accept no imitations: The pure Suphalak breed, left, has uniformly copper fur whereas despite his name Johnny Suphalak, right, is believed to be a Burmese cat because its fur has nine darker spots.