The 'thieves' whose story got stolen
Thailand
Special Report

The 'thieves' whose story got stolen

After two Hmong hill tribe girls were accused of stealing a watch by the media, little was done to clear up the false accusations

face of innocence: Dokmai and Gaolhee Poommarit became media sensations when they were accused of being caught on camera stealing a British tourist's watch at Doi Suthep temple, Chiang Mai. (Photo by Chaiyot Yongcharoenchai)

'Dad, what did I do wrong? Why don't we go to the temple any more?" Dokmai, a 10-year-old Hmong hill tribe girl, asked her father innocently. She was wondering why she and her sister no longer visit Doi Suthep temple as much as they used to.

One of many things that Dokmai and her seven-year-old sister Gaolhee used to look forward to was going to Doi Suthep after school. The two adorable sisters live in the peaceful village of Doi Pui, surrounded by the tranquillity of nature. Located high up in the hills, they are faraway enough from Chiang Mai, the nearest big city, that they hardly feel the influence of fast-paced city life.

It was only recently when Dokmai and Gaolhee's innocent worlds were turned upside down. When a British tourist found her watch missing after taking a photo with the girls, she immediately accused them of stealing it. The last time she recalled seeing it was at the temple, where she had met them. In an impulsive plea, she told her story to a UK tabloid. The girls became a media sensation and were given the nickname of the "adorable thieves".

After the story broke, the sisters and their family came under investigation by the Chiang Mai police.

It wasn't long after that the British woman who started the drama declared she had found her watch.

The girls were cleared, but the woman had done little to fix the damage to their reputation that she had done.

On Sept 26, Poommarit Jirapaporn, 37, was fast asleep after a long day at work when he was awoken by an urgent phone call. The village headman of Baan Doi Pui village was on the line. "Did you see the news?" he asked. 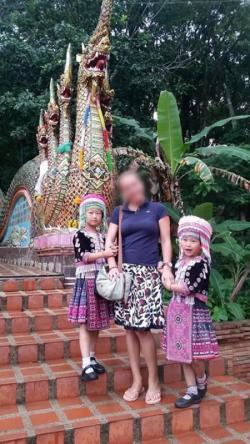 Mr Poommarit wasn't sure what he meant by "the news". He headed for the shower quick before making his way to the village headman's house, where he was informed his daughters were "allegedly thieves".

The village headman explained the story in the tabloids and how the girls had been framed as crooks.

Questions swirled around Mr Poommarit's mind. "Did they really do it?" he asked himself. He was at a loss for what to think.

So he rushed home to wake up his daughters, Thidarat "Dokmai" and Kallayanee "Gaolhee". He told them about the phone call he had received and asked them to be fully honest with him.

"I know deep in my heart that my daughters could never have done anything like that," Mr Poommarit told Spectrum. "I taught them many things but stealing is not one of them."

Dokmai swore to her father that she didn't do it. Every day, she had greeted farang tourists at the temple. Up until that point, there had been no complaints concerning theft. Why had it suddenly become a problem now? She asked.

Mr Poommarit sensed a real innocence in his daughter's voice, but he felt he needed to set the record straight. He took the girls downhill to the Chiang Mai police. He wanted to be sure people got to hear his daughters' side of the story.

It was a daily tradition of Mr Poommarit's to take his daughters to Doi Suthep after school on his motorcycle. The ride is around eight kilometres from their Baan Doi Pui home along a steep and curvy road.

The temple abbot had been the first to invite Doi Pui villagers to bring their kids dressed in Hmong costume to greet tourists and promote the local ethnic culture. The act was considered a form of community service.

For years, this has been the tradition for Dokmai and Gaolhee. They would perform a dance for the tourists and take photos with them at the foot of the steps leading up to the temple. In return, they would get money for snacks, earning an average of 200 baht per day.

But money was never their main motive for going to Doi Suthep. Mr Poommarit says the girls genuinely enjoy meeting people from all walks of life. There's no guarantee they will make money when they go out -- sometimes they get toys or random items, sometimes nothing at all. But being at the temple still gives them a sense of joy.

Du Nithiworaphob, the 38-year-old mother of the girls, takes them to the temple on weekends while she sews Hmong traditional costumes on the side. She watches the girls interact with tourists and has never seen a problem with the set-up.

"My daughters are as bright as can be," Du told Spectrum. "They are adorable and sunny spirits. Among all the sellers and vendors around the temple, they are the real sweethearts of the lot. But most importantly, they are honest kids. Stealing is considered a hugely shameful act in our family, as well as our tribe community, and I would never encourage them to do that."

SHOW ME WHAT YOU GOT

Every time Dokmai and Gaolhee return from Doi Suthep, their father asks them to do one thing -- to empty their pockets. He's been asking them to do this since he first started taking them to the temple.

"I always ask them to clean out their pockets and bags," Mr Poommarit explains. "I want to see what they get and how much they earn each day. It's my house rule and I've been practising this for a long time. Whatever my kids collect during their time at the temple, I need to know where it's from and how they got it.

"This is why I don't believe the news at all [about my daughters being thieves]. I see what objects they gather every day and I've never noticed anything that looks like that watch that the foreigner accused them of stealing."

After realising her watch was missing, the British woman posted a picture on Reddit of her and the girls, implicating the girls in a theft. The photo shows Dokmai holding onto the woman's wrist, suggesting she had removed the watch while the picture was being snapped.

The Daily Mail picked up on the story and published the pictures that the woman, who remains unnamed, posted online of the girls.

The social media world quickly began commenting on the photos. Some people suggested the girls were part of an organised crime gang. Some speculated the girls were trained pickpockets and had been tricking tourists at the temple all along.

The story reached such a level of buzz that Mr Poommarit had to take his family to the police station. But few people are aware of how the story ended -- with the British woman eventually finding her watch.

The tale of the adorable thieves had enjoyed its viral moment. Yet when the woman found her watch, no one cared to clear the girls' names for good.

The sisters and their hill tribe community had suffered an irreversible loss of face at the hand of irresponsible accusations.

TOO SCARED TO GO

Several months have passed since the viral incident. The girls have been back to the temple, but they don't go as frequently as they used to. They have been contacted by the temple abbot and village headman, who have asked them to resume their activities, mentioning the girls were a large part of the temple's charm. But few villagers have brought their kids back -- scared to be placed in another incriminating situation.

"The governor, the abbot and the village headman have all asked us to bring back our kids," said Mr Poommarit. "But I think it's best if we lay low for now. I know my kids did nothing wrong. I can't stand them being judged by the whole world for a crime they didn't commit."

Since the incident, only one international media source -- a US-based platform devoted to covering Hmong people -- came to set the story straight.

"It's funny how white people's voices always end up being louder than those of ethnic people like us," Mr Poommarit said. "I don't ask for much. All I really want is a simple apology."

Nowadays, Dokmai and Gaolhee live like normal kids. They go to school and get to run around and play. They have gone back to the temple on some weekends, but they are still hesitant to engage with visitors.

MY KIDS ARE INNOCENT

Methapan Fuengfukit, the village headman of Baan Doi Pui, told Spectrum that his community is a very small and tight-knit community. Everyone knows each other quite well.

"Mr Poommarit works for me," Mr Methapan says. "I know how he is and I know the whole family. Hmong people are honest people. I knew they didn't steal the watch even before I talked to them. But as the village headman, I have to react to and investigate the complaint, especially when it is issued against my people."

While her husband works for the village headman, Ms Du makes Hmong costumes and sells fruit to provide for their family. They have four kids together, all born and raised in Doi Pui.

"Though we are not rich, we have more than enough money to raise our family," Mr Poommarit said. "Stealing is not and has never been in my books. The little money that my kids earn from the temple is only used for their education.

"How would my kids know how to steal a watch right off from that woman's arm anyway? They don't even know what a watch is. They've never owned one -- it's simply not considered a necessity for us."

When Spectrum visited Dokmai and Gaolhee, they had just finished their day at school. On the way back home, they held hands, happily following their mother on foot.

"I still love going to the temple but now I'm being more careful about interacting with other people. I don't want them to think I am a thief -- because I'm not," Dokmai said. 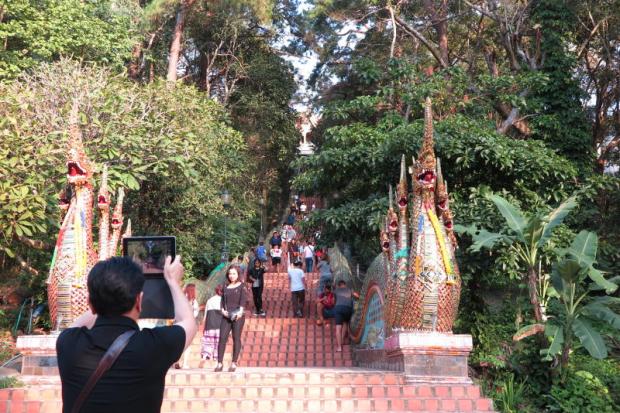 mind your step: Dokmai and Gaolhee greeted and performed dances for visitors at the popular Doi Suthep every day after school until a viral incident questioned their integrity. 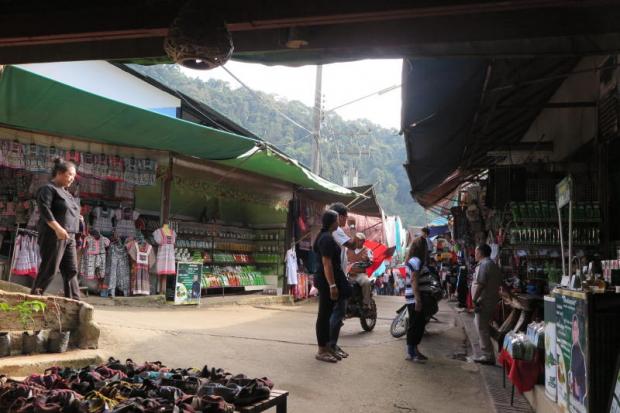 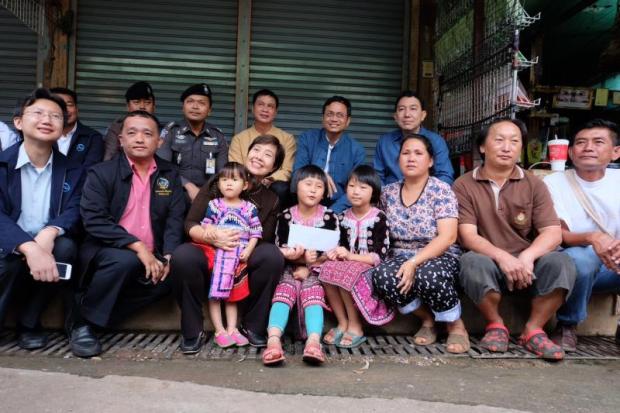 honouring the family name: Dokmai and Gaolhee sit next to parents Du Nithiworaphob and Poommarit Jirapaporn, sitting right of the girls and among fellow Hmong villagers. Photos: Chewin Satha 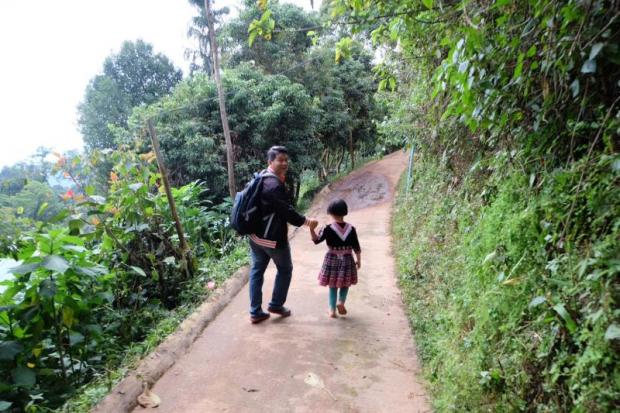