The case of the closing(?) Art Center
Thailand
Special Report

The case of the closing(?) Art Center

To close down or not to close down? One would have thought that that is not the question for Chulalongkorn University's The Art Center, after having been one of Thailand's most prominent art institutions for 20 years -- after playing host to some of Thailand's best-established artists as well as international names such as Joan Miró, Marina Abramovic, Zhang Peili and more.

The Thai art scene in 2016 was too exciting for this year to begin with such a blow. To many people's understanding, the gallery, located just above the university's central library, will be finished for good. The current show at the venue is a self-proclaimed last exhibition, "Farewell: The Art Center's Acknowledgments 2016".

A somewhat different story, however, is told in the official wording from the school's Center for Academic Resources, which claims it is only shutting down "temporarily for two years" as part of the library's overall renovation plan.

The exhibition statement reads: "The Art Center hopes this exhibition will act as 'acknowledgment' that expresses deep appreciation for the artists who have exhibited at the gallery while at the same time creating a memorable show that says something meaningful about Thai contemporary art."

The Art Center's manager, Suebsang Sangwachirapiban, said that he had been informed by the Office of Academic Resources' acting director, Assoc Prof Dr Amorn Petsom, that the space will be closed down temporarily, and in about two years' time will reopen and operate under a different system. From being run by the space's curatorial team, the proposed plan is to operate the space after the model of the university's Chamchuri Art Gallery. Interested artists are to send in works to be considered by a committee rather than be invited and funded for shows by the space, like previously.

From a policymaker's point of view, this is normal; buildings get built and then demolished, spaces launched and then shut down. From artists, curators and the general public's standpoint, however, this move by the Center for Academic Resources is neither promising nor easily comprehensible. 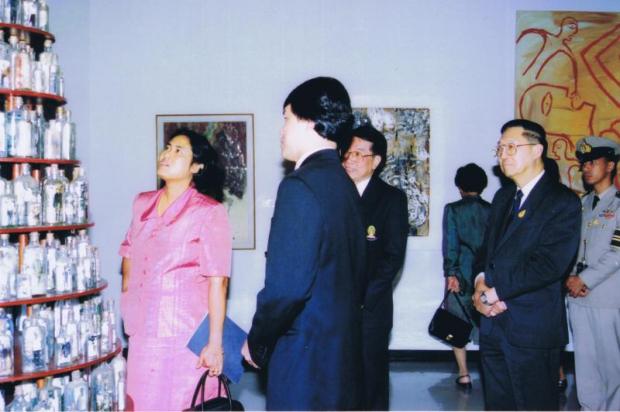 The Thai art scene has in the past several years gone through one of its most exciting transformations. Small art spaces in Bangkok have popped up like mushrooms to give viewers exciting alternatives. The MAIIAM Contemporary Art Museum in Chiang Mai was launched last year, not only as another museum-sized art institution but also as a potential contemporary art collector the country sorely lacks. And along with Silpakorn University's Art Centre and the Bangkok University Gallery, Chulalongkorn University's The Art Center has been a tremendous player in all this, continually creating over the past two decades a critical dialogue in society through the visual arts.

It would be a shame -- an embarrassment, even -- for such a prestigious educational institution to fail to recognise the importance of keeping up this dialogue through art. And it doesn't take an art expert to point out the difference between a space with strong curatorial direction, which invites and funds artists, and one where artists simply turn in their work and schedule their slot. Not that either is better, but there's a tremendous difference.

On display now for the farewell show is a clutter of works by 50 artists who have previously shown in the gallery and are now invited to bring in old or new works as a tribute to the space.

Former permanent secretary for the Ministry of Culture Apinan Poshyananda, who had been The Art Center's first director, from 1995 to 2001, said it's a shame the space has to go, but it's also understandable, as it's a matter of policy.

"At the start, the university wanted to establish a proper art space," said Apinan, who taught at the Faculty of Fine and Applied Arts at the time. "In the preparation stage, The Art Center was put up as a space to experiment in. In those days, there weren't too many spaces in Bangkok, and we were quite active, along with spaces like About Studio/About Cafe, Tadu Contemporary Art and Project 304, in giving young artists the opportunity to express themselves."

Right at the entrance of The Art Center now is work by Apinan himself as part of the farewell show. Apinan had bright pink neon frame the metal plate commemorating the date HRH Princess Maha Chakri Sirindhorn came to officially open the space in 1995. This gives what still exists a nostalgic sense while also reminding viewers how it all started.

Aside from having exhibited works by international stars like Joan Miró, Marina Abramovic, Zhang Peili, Hung Liu and Yasumasa Morimura, the space is also where many established artists today started out. For example, the critically acclaimed 1995 exhibition "Thai Tensions" -- curated by Apinan himself as part of the travelling exhibition "Tradition/Tensions" that opened the following year at the Asia Society in New York -- featured names like Chatchai Puipia, Montien Boonma, Panya Wijintanasan, Araya Rasdjarmrearnsook, Kamol Phaosavasdi, Jakapan Vilasineekul and Navin Rawanchaikul.

In the farewell show, featured works range from the old, which have nothing to do with the tribute concept, and the new, created specifically for this occasion. While Pinaree Sanpitak's paintings take us right back to her 1997 solo show "eggs, breasts, bodies, I, etcetera", Thanet Awsinsiri plays with the imminent closure of the space by ripping his painting off and placing it next to an empty frame.

Likewise, photographer Dow Wasiksiri uses installation shots of his own exhibition last year but Photoshopped his works off, playfully leaving the audience to empty walls. Perhaps most poignant is Latthapon Korkiatarkul's conceptual work. He has photographed all the little holes, marks and spots caused by the installation process in the art space before having them layered together until they assemble into complete blackness. It's a beautiful yet futile attempt to record the physical aspect of history that is tumbling down. 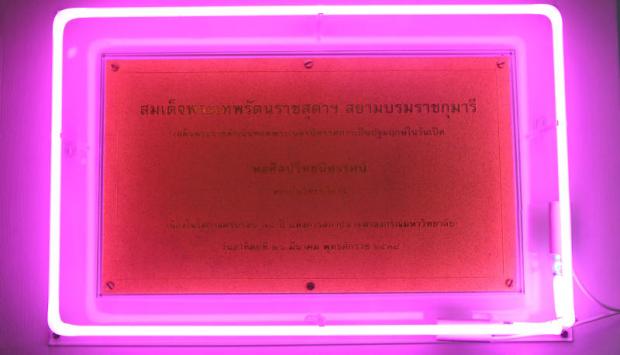 Current director of The Art Center Prapon Kumjim said that the experience here has shaped his career as an art worker as opposed to just an artist.

"I had the opportunity to work with some great artists of the time. I am thankful to all who have made this possible," said Prapon. "I think Bangkok has come a long way over the past 20 years, and The Art Center played a significant role in supporting contemporary art on an international scale."

This show is very much a déjà vu from 2004. The space was closed down before being resurrected about a year later, and there was also a farewell show back then, for which Apinan invited a number of artists to join like in the current show.

All this may well hopefully be a rerun of the same film, for in a recent interview with Life, Chulalongkorn University's Office of Art and Culture's director, Kunchit Jitratan, insisted that he hasn't heard about the imminent closure of The Art Center.

"I have just spoken to Chulalongkorn University's President Bundhit Eua-aporn, and he insisted that there's no policy whatsoever yet regarding any change or closure of The Art Center," said Kunchit. "He said that if there is to be any change, it will have to come from a master plan and must go through much more of a process."

"Farewell: The Art Center's Acknowledgments 2016" is on view until Feb 18 at The Art Center, 7th floor, Center for Academic Resources, Chulalongkorn University.