On the aspect of knowledge, Chula 4.0 means Chulalongkorn University will focus on four priority issues: an ageing society; food, water and energy; the creative economy; and the digital economy and big data, the former dean of the faculty of engineering said.

The studies will not belong to any faculty in particular but will involve collaboration among relevant experts. For example, studying the ageing society will involve not just experts in public health or technological science but experts in social sciences.

"In the dynamic world today and in the future, sticking to only one dimension [of studies] cannot respond well to change," Prof Bundhit said, emphasising the importance of multidisciplinary and collaborative studies.

Regarding strategies, Chulalongkorn University will aim to complete its roles in four areas: human resources, knowledge building, contributions to Thai society and reaching out to the global community.

"Our aims will always be in mind, how can we contribute to society. We also want to be recognised at the international level," he said.

Chulalongkorn students will be expected to be able to think, to implement and to communicate effectively.

Chula 4.0 is using technologies in learning management to aid students to be able to analyse and think critically. 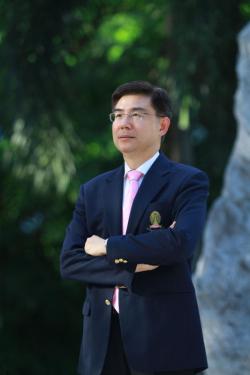 "According to Thai educational culture, students do not normally challenge their teachers. But from now on, we will encourage them to challenge, to think and experiment. Then they should listen to society's feedback and develop their work further," Prof Bundhit said, adding that the learning strategies have been used in the faculty of engineering for some years before he assumed the post as president last May.

"To solve the problem that some students only apply for some classes just for good grades, we will instead encourage them to study the subjects they really want to learn," he said.

Some subjects in the General Education category will not be evaluated with grades. "Students must be allowed to learn what they want, not just register because they are compulsory. However, to increase motivation and competitiveness, lecturers will also have a chance to choose their students," he said.

"Students must have choices. The class must be better than YouTube," he said.

Currently, the communication and activities between the students and lecturers outside the lecture hall are enhanced by Course Ville, a learning management system developed by Chulalongkorn University which has also been used in some Thai schools.

On the faculty side, the university will promote lecturers to do what they are good at and want to develop.

"Lecturers who are keen on doing research are certainly promoted. However, some lecturers are very good teachers, some lecturers contribute greatly to society, but they do not have many research or academic papers published. The chance for them to become associate professor or professor is not very high. But they must also be recognised," the university president said.

Chulalongkorn University has 37,000 students including 24,000 undergraduates, studying in the Thai and international programmes. Meanwhile, there are almost 3,000 lecturers and researchers plus 5,000 supporting personnel.

To promote innovation, the university set up the CU Innovation Hub in July last year to act as a centre for innovation and entrepreneurship. So far, 49 patents have been created and many companies have been set up after collaboration among the students, the centre, the business sector and alumni.

"The ideas must be feasible and useful in reality," Prof Bundhit said.

An example of CU Innovation Hub's achievement is Via Bus, a mobile app that tells the user where the bus is and the estimated time of arrival. Knowing the information allows the user to manage time and avoid wasting time at the terminal. The Bangkok Metropolitan Transportation Authority and some boat operators have adopted this app.

As part of Chulalongkorn University's contribution to society, it aims to groom and attract good people into Thailand's labour market.

Meanwhile, it also aims to promote good and inspired researchers and personnel to join hands in doing research to find breakthrough knowledge to contribute to the world.

"We want people to regard us as an intellectual society, not only think of malls," he said referring to shopping complexes such as Siam Square and MBK situated on its leased land.

In response to criticism that Chulalongkorn is a rich university that makes profit from its assets, Prof Bundhit said the university has a lot of expenses.

"Yes, we have some assets. But we are like rich people who have many children to take care of. People rarely realise that education is very expensive," he said.

He said that out of its annual budget of 15 billion baht, the university receives only about 5 billion in support from the government. Property leasing contributes to 20% of expenses and 30% of the budget comes from tuition fees.

Despite this, Prof Bundhit said Chulalongkorn University is ready to invest in its people and the new strategies to achieve its goal.

"We want to be a national university recognised at an international level," Prof Bundhit said.

Celebrating its centennial, Chulalongkorn University dedicates CU Centennial Park, a 30-rai public park, which comes with a road linking Rama I and Rama IV roads to the community.

This evening, thousands of alumni will join celebrations and the candle-lighting ceremony to show gratitude to the university's founders, Their Majesties Chulalongkorn (King Rama V) -- the father of modern education in Thailand -- and King Vajiravudh (King Rama VI), the founder of the university. n