One-fifth of Thais will be 'elderly' soon, so the state is planning to ensure healthcare for them

As Thailand moves inexorably closer to the definition of an ageing society, with the number of retirees expected to make up an unprecedented 20% of the population by 2025, state officials are looking at a variety of pragmatic schemes to help senior citizens live a quality life into their twilight years.

The measures include the Family Care Team (FCT) concept in which trained healthcare staff deliver medical care to the elderly, particularly bed-ridden patients and those suffering from paralysis.

Each team is made up of a family physician, dentist, nurses, dental nurses, a pharmacist, a public health officer, a traditional Thai medicine expert, a physiotherapist and a care-giver, a local resident working as a healthcare volunteer. 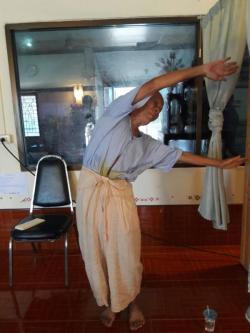 An elderly man follows the medical unit's workout instructions during a regular meeting with the team.

Those specialising in the medical and public health fields are drawn from local clinics, hospitals and relevant state agencies in each province.

The healthcare teams work at the district, tambon and family levels.

In Phetchabun, the FCT has provided healthcare services to about 800 senior villagers in Khao Kho district, both at elderly healthcare centres in many tambons and also at their homes.

Khao Kho Hospital director Theerapoj Fucknoi said medical staff from local and major sanatoriums in the district have been working with residents in the healthcare teams to help seniors live a comfortable life. They also nurse them when they suffer from non-critical illnesses.

The team operates with support from the state's committee to promote quality of life for the elderly under the Ministry of Public Health.

Both conventional and Thai traditional healthcare approaches are adopted in looking after the villagers, many of whom suffer from muscular pains and arthritis.

Herbal medicines are often dispensed to the elderly patients as they are safe and have fewer side effects than conventional medicines if used appropriately, Dr Theerapoj said, adding the plants used to produce these traditional drugs are chemical-free and grown on the villagers' own land.

The villagers from across the district meet family healthcare teams at designated assembly venues once a week. They are given the option of receiving a physical examination or getting modern or traditional treatment for their ailments. They can also join constructive activities for the elderly such as exercise, prayer, meditation and traditional massage.

If anyone is unable to attend a weekly appointment, team members can visit them at their homes.

Dr Theerapoj said medical advice is given to the elderly so they can gradually adjust to living a healthy and contented life. The advice is to promote both physical and mental health.

Team members encourage their patients to take part in weekly activities where they meet and share their ideas with their peers. The practice helps to reduce stress and boost their mental health. 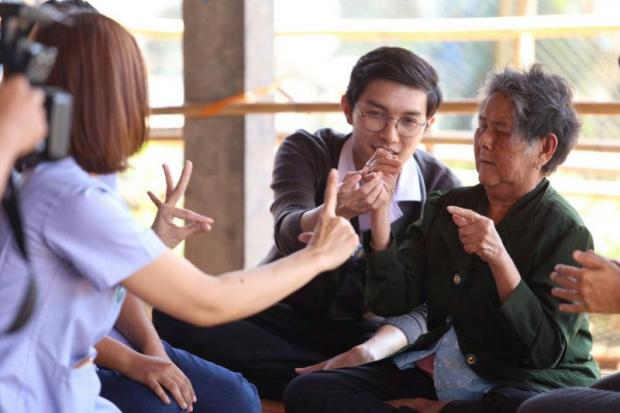 Members of the mobile medical unit, including volunteers, assist the elderly in performing slow stretching exercises to help them regain full function of their arms and hands. (Photos by Penchan Charoensuthipan) 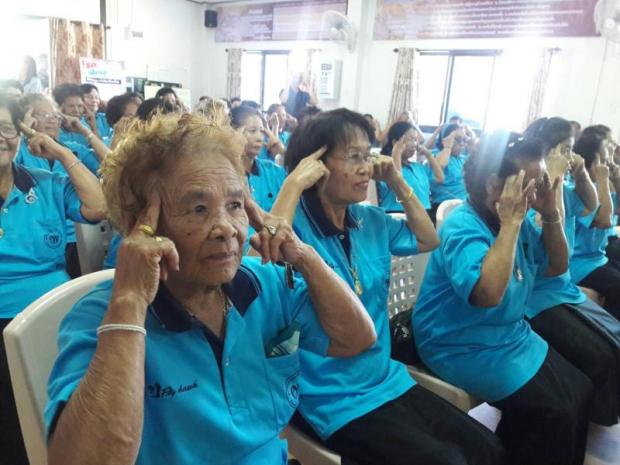 "Most elderly people tend to want to live in isolation in their homes because they feel safer and more comfortable cocooned in their comfort zones. With this lifestyle of solitude, many of them not only suffer physical ailments but mental disorders such as depression," he said.

Also in the same district, Tambon Lao Ya Elderly Healthcare Centre opens its door to the elderly residents on the second and fourth Fridays of each month.

An all-day event starts with prayer and exercise in the morning followed by other sessions such as a medical check-up and traditional healthcare services including reflexology massage.

One of the regular participants is Khampan Kallayama, who said he makes it a point to mingle with friends his age every month at the centre which is adequately equipped to accommodate the elderly members. 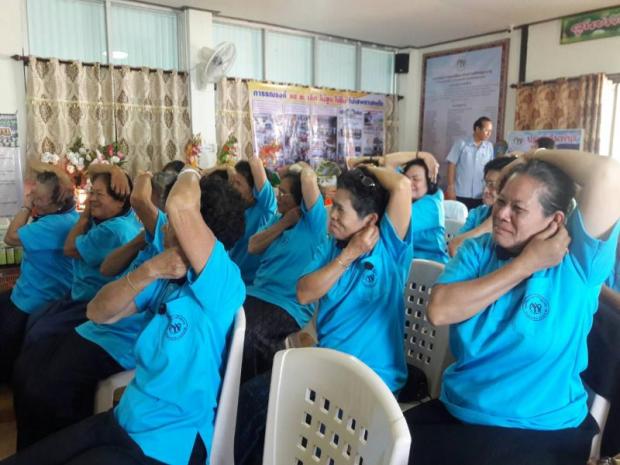 The medical team shows a group of elderly residents how they can do a simple exercise together to relieve tension and boost blood circulation. A foot spa is offered as an added service.

Meditation and prayer do wonders in calming him and improve his concentration. The sessions are also key to living peacefully in his retirement age, he said.

"Doctors diagnose me with high blood pressure sometimes, but I do not suffer any serious illnesses. Today, I live a life based on three principles of eating well, calming my nerves and exercising regularly.

"I've always eaten a low-fat diet and nutritious food such as fish and vegetables and avoid food high in sugar and salt," Mr Khampan added.

Aside from the elderly healthcare centre, the Tambon Lao Ya Health Promotion Hospital is also an example of a facility that provides effective healthcare management for villagers, particularly senior residents, in local communities.

Currently, the hospital has about 16 qualified healthcare givers. They offer medical assistance to bed-ridden elderly as well as to disabled senior villagers.

Besides medical care, the team also acts as an intermediary between patients and state agencies to help them acquire state welfare, such as through registration of the elderly and the disabled with the government. It includes non-medical matters like ID cards and various official documents.

Ramphai, daughter of Khamkhai Chansaen, a 71-year-old who previously was unable to walk or even sit without assistance because of myasthenia gravis -- said her mother's condition has gradually eased after care given by the hospital's medical team over the past year. 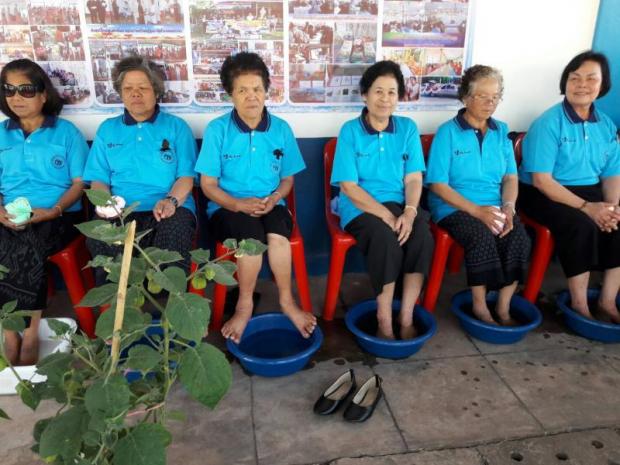 The team calls in on her mother at home and provides physical therapy including walking practice along with herbal remedies.

After almost a year of therapy, Ms Ramphai said her frail elderly mother was now able to lift herself and has learned to walk with parallel bars.

A 50-year-old local woman, who declined to be named, said she has fewer worries now that her elderly mother in tambon Lao Ya is in good hands and getting physically stronger after regular visits by the team.

Hospital director Bunnagone Suasing said the hospital has sufficient medical staff and facilities to deliver healthcare services to senior villagers throughout the tambon.

He said treatment centres offer both conventional and traditional medicines for people with diabetes.

Poovanon Eamchan, director of the Northern National Health Security Office Region 2, explained the FCT was established and funded by the ministry to assist the elderly nationwide under a joint cooperation between tambon healthcare centres and major hospitals in each province.

If the FCT operates out of small, ill-equipped hospitals, major hospitals will step in and support them and help to arrange healthcare training for care givers.

In the training, volunteers learn to perform first aid and nasogastric tube feeding and care for the elderly with bedsores. They also learn how to judge an elderly person's condition and whether treatment is beyond the capability of local clinics and hospitals. The patient can then be transferred to one of the main hospitals in the province.

Also, each healthcare team is supervised and its performance evaluated by doctors or nurses who take part in planning long-term treatment. In many cases, the team does the follow-up at home for the elderly after they have been discharged from treatment at a hospital.

Mr Poovanon said the government wanted Thailand to be well-adjusted to and prepared for the aging society. Every effort counted towards making the elderly aware of their health and the medical personnel and facilities functional for the healthcare task.

Apart from the FCT, other public and private bodies have also been workingd on the same issue.

Several age-related agencies including schools and health centres for retirees have been established to enhance quality of life around the country.

"Even Japan, a country which is well-known for exceptional healthcare standards for the elderly, has expressed interest in visiting Thailand to inspect our medical service system for senior citizens," Mr Poovanon added.

Local healthcare networks for elderly people will be established to help alleviate the burden on provincial hospitals as well.