Men and their mistresses

After Prime Minister Prayut Chan-o-cha's suggestion of gik laws banning infidelity made headlines, he claimed he had been joking because "housewives in the audience looked sleepy so I was threatening their husbands".

His joke in a speech in Nakhon Ratchasima prompted a debate over whether such a law could be enforced, but there was no debate over an assumption behind his comments: infidelity is for men.

In fact, Thailand doesn't have a culture of infidelity as claimed by many commentators; it has a culture of men and their mistresses.

A prime example is this year's hit TV soap opera Sanaeha in which the happily married male lead Don is convinced to continue his affair with co-worker Mind after she tells him that she understands the rules around infidelity well.

Her argument reminds us that in Thai society there is such a thing as an acceptable mistress -- one who follows the conventions of the well-defined, regulated role set out for her. As long as she doesn't overstep her boundaries (like Mind unfortunately did by giving Don HPV and then kidnapping his daughter), it's a harmless arrangement.

The word "gik" (casual sex partner) seems to exemplify this harmlessness. It emerged as a contraction of a phonetically endearing word implying affection. No wonder Gen Prayut scolded journalists for misunderstanding his intent: with a word like "gik", how could he be talking about regulating infidelity -- male infidelity -- without it being a joke?

Mind alluded to the unspoken rules of being a mistress in Sanaeha, but during the reign of King Rama V there were legitimate rules around how mistresses -- a category that included many women, given that male polygamy was the default family arrangement -- could conduct themselves. The Sakdina system saw women entirely as a function of their class and their relationships with men. Women at best could receive half of their husband's Sakdina value, with mistresses receiving half of the first wife's. As a result, the Sakdina value for women ranged from 100 to 1000 (in contrast to men's values of 400 to 100,000).

Given their low values, female sexuality was vigilantly policed, and they were prohibited from marrying below their status or from having affairs. Meanwhile, unmarried slave women -- existing at the bottom of the matrix of class and gender -- could be legally raped by their owners, while married slave women could be sold without consent by their husbands.

The Sakdina system was an explicit recognition of the power relationships, socioeconomic forces and gender biases that lay the foundations for Thai male sexual privilege.

The social sanction of male sexual behaviour lives on. The fallout over Gen Prayut's joke was not the first time people had angrily protested about the state attempting to regulate male sexuality. In 2003 the Thai Rak Thai party suggested screening election candidates "so that only faithful and monogamous husbands can stand in elections". Members of Parliament openly protested, with Amnat Charoen MP Thirachai Sirikhan arguing: "To have a mia noi (minor wife) is an individual's right. There should be no problem as long as the politician causes no trouble to his family or society."

When King Chulalongkorn established the first krom ayakarn (public prosecution service) in 1894, it was the first time offences were considered "a danger to the public" and could be brought to court by public prosecutors. Rape was one of those offences. 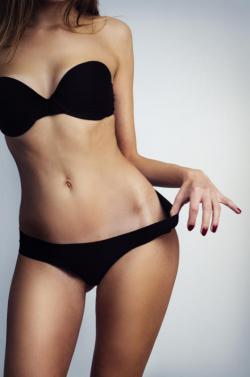 The year after the system came into effect, 80% of rape cases reaching the Dika court were brought by public prosecutors, meaning only the other 20% of cases would have been heard if the injured party needed to bring the rape charge to court themselves. Rape as a "danger to the public" also meant that individual settlement between a woman and her wealthy rapist was no longer sufficient; the rapist would also have to serve prison time as a debt owed to society.

However, when a new legal code was promulgated in 1908, rape and adultery were downgraded to personal offences. In contrast, crimes against the public included emasculation and sodomy. Male sexual privilege was not just naturalised but legally recognised under a penal code that now saw the public that deserved protection as explicitly male.

What did it say about the insecurities of the patriarchal state when up to that point no one had ever been prosecuted for sodomy, but somehow the rape of men was regarded as a markedly more grievous offence than the rape of women? What did it mean when the state placed the protection of male bodies at the centre of the public agenda but left the protection of female bodies as a subjective, personal matter?

The so-called modern penal code created a more biased gender hierarchy than even the Sakdina system, but the implicitly male language of legalism now subsumed these vast inequalities.

However, while laws on adultery did not recognise women as autonomous legal entities, they did recognise women as powerful economic agents. Throughout the Sakdina era to the early 1900s, women were able to freely conclude land deals without seeking approval from their husbands, while land purchase and sale among married men required marital consent.

Today the legal definition of a man's unfaithfulness is the misappropriation of property from the main wife to the mia noi. As such, having a legitimate mistress is not a function of sexual relations or intimacy, but rather the female-authorised transfer of real estate between a man and another woman. The centrality of women in the economic affairs of the family of the modern day has set the cultural framework for the celebration of female achievement in the world of business these days.

When monogamy was finally legislated in 1934, women were granted certain social rights, but only in exchange for this economic agency. Women could now file for divorce or contest a rape case, but husbands became sole legal administrators of jointly held property. Moreover, monogamy did not bring about social change; it simply made it easier to ignore female pain and female shame.

A Mahidol University poll on infidelity revealed that 42% of men admit to having mistresses. A few women admitted to letting their partners buy sex because it was better than their partner having a mia noi. It is an image of consent but also a heartbreaking one: a woman having to watch her husband leave their home to have physical relations with another woman, knowing that the socially sanctioned alternative is much worse.

Forum posts written by women on the topic are numerous: confessions whispered with distress into the anonymous internet. One writes: "I still love my husband, and I feel sorry for my children -- my daughter is four -- so I keep giving him second chances … I'm only a housewife, so I can't just do what I want to." The reply: "You'll need to just get over it." Another posts a screenshot of her husband writing "I miss you" to another woman. The reply: "Stay calm." In new TV drama Mia Luang, Vikanya, the female lead, knows her husband is having an affair with their babysitter, but she remains silent.

There are numerous blogs, from Pantip to Manager, addressing the urgent question: "I found out about my husband's mistress. What do I do?"

One Kapook article suggests what not to do: firstly, don't break up with him. Secondly, don't tell people about your husband's affair.

This narrative of shame also haunts those mistresses of the middle class -- sex workers. The title "sex worker" is sometimes a misnomer: an independent sex worker in Chiang Mai relates that most of her job is having drinks with customers, only involving sex two or three times a month. Akin to a "professional girlfriend", independent sex workers provide affectionate company to middle class or foreign men. In return, clients will buy her clothing, take her to watch movies and on dates.

Modern advocates for gender equality have sought to normalise sex work in Thailand along these lines, elevating these modern mistresses above the many who are still mainly paid for sex in brothels, bars and massage parlours.

Thai Rath editor Thepchu Thapthong's book Women of the Green Lamp portrays sex workers as enthusiastic free agents in the service industry. Like other male authors, historians and anthropologists, from Charles Keyes to Peter Warr and Don Kulick, the narrative of sex work as "free choice" attempts to set aside the question of morals.

A university student doing sex work to pay for her expenses told an interviewer that "my life doesn't give me choices".

Siriporn Skrobenek, president of the Foundation for Women, articulates this sentiment with more nuance: "These women may well have the capacity to separate their sex work from their self-identity." In the words of one of the sex workers she interviewed: "Once I met my customer on a street, he tried to approach me. But I ignored him. What right does he have? Outside a brothel, I am a normal woman."

The irony of mistress culture in Thailand, as exemplified through sex work, is that there is a culture of shame and moral condemnation around a role that was created by and for men. Yet the normalisation of male sexual privilege allows the shame, and the pain, to fall entirely on Thai women. The sex worker's idea that the "normal woman" exists separate from her work is an example.

Even for independent prostitutes, few would choose this work were it not a matter of financial pressure. This is evident in Sweden and the Netherlands, where sex work is legal, protected, lucrative and safe, yet it is not as popular a profession as it is in Southeast Asia. Even in these countries, most of the 2,500 sex workers are migrants from India, Laos or Thailand. To ignore these economic realities is to indulge the male fantasy of romanticising sex work.

Mistresses and sex workers carve out space within the limitations imposed on them. But to disregard the social censure around mistress culture is to trivialise its difficulty. It is, like Gen Prayut, to joke about giks to the husbands in the room.

There is silence around the impact mistresses exert on the real estate market, where women from wives to mia noi have been actively involved in the exchange of face and property, where Bangkok's urban planning is affected by married men buying apartments for their lovers and larger houses in compensation for their wives.

There is silence around the private hurt that women experience as their husbands have affairs. The sheer number of forum discussions and articles marks the loudness of this silence, where accounts of betrayal and misery are shot into the silence of the internet and intensely personal questions are addressed to and answered by strangers.

Yet the question of infidelity, of the family and even of the economy is a question of women. And in having the stories, histories and narratives of women define mistress culture, we begin to uncover some of the ways in which Thai women powerfully and heartbreakingly hold up half the sky. 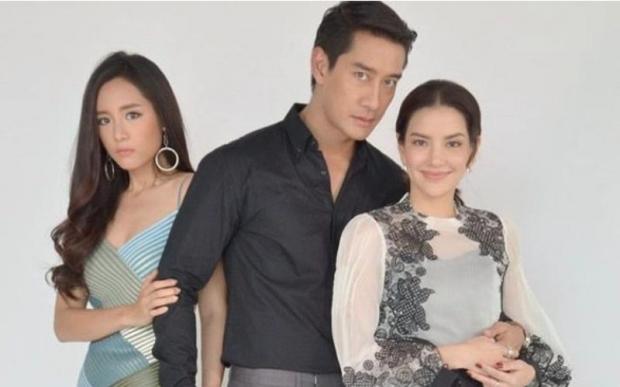 KNOWING THEIR PLACE: Lakorn series 'Sanaeha' features a happily married man who continues his affair with a co-worker after she tells him that she understands the rules around infidelity. photos: SUPPLIED 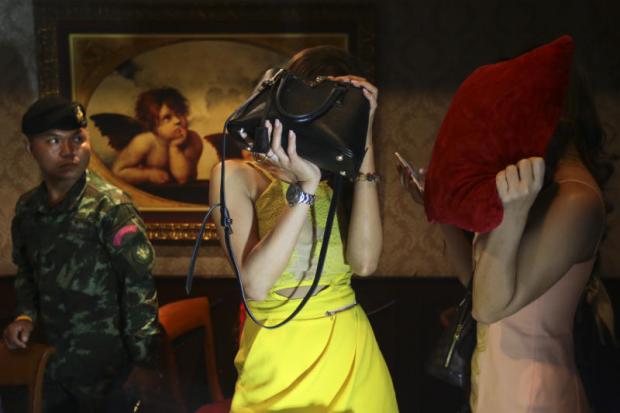