After 130 years of diplomatic relations with Thailand, the Land of the Rising Sun shares a deep reverence for royalty

WELCOME: A picture of His Majesty the King receiving the Imperial Couple on March 5 is the main attraction at the photo exhibition. PHOTOS: COURTESY OF THE CULTURE MINISTRY

With a solemn face, a senior Japanese academic stopped in front of a large image of the late King Bhumibol Adulyadej and stood still, her head bent and eyes closed.

Keiko Ishikawa made staid gestures in a show of deep respect to the revered king before entering a photo exhibition held in the king's honour at Soka University in Hachioji, Tokyo, where she viewed a set of royal pictures. The exhibition was held by the Thai government in cooperation with the famous university as part of the 130th anniversary this year of Thai-Japanese diplomatic relations.

Ms Ishikawa, who is president of Soka Women's College, said the two countries shared cultural similarities, particularly as they both have a royal family as the main institution. 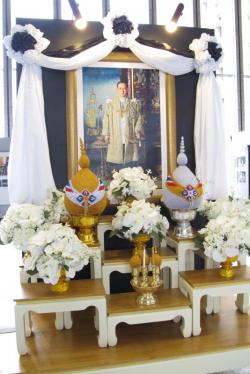 REVERED: A large photo of the late King Bhumibol Adulyadej stands at the entrance of the photo exhibition at Soka University in Japan.

Several pictures showing landmark stages of the late king's life, including his coronation ceremony in the Grand Palace in 1950 and also the king in monk's robes, were on display, together with some of his works that demonstrated his artistic talents. There were photos featured grand mourning ceremonies in both countries.

The exhibition venue was beautifully decorated with yellow flowers, the colour symbolising the king's birthday, which was on a Monday. The flowers were arranged by university volunteers who carefully chose 89 types of yellow flowers -- the age of the late king when he passed away last October.

Placed at a prominent place was a picture of Emperor Akihito and Empress Michiko, with yellow flowers in the background when they announced three days of personal mourning last October.

Capturing the visitors' attention also were pictures that demonstrated the love of Thai people for the late king. One picture showed Thai mourners, with tears rolling down their faces, thronging Bangkok streets to observe the royal procession between Siriraj Hospital and the Grand Palace.

Relations between the two royal families are cordial and warm, with members keen to visit their counterparts at home. King Bhumibol and Her Majesty Queen Sirikit visited Japan in 1963, while Emperor Akihito, who was then crown prince, returned the visit together with then Crown Princess Michiko the following year.

Among the royal visits by the Imperial Couple, the most important ones were in 2006 when they joined royal families around the world at a ceremony to mark the 60th anniversary of King Bhumibol's accession to the throne and the latest one on March 5 this year when they bade farewell to the late king when he was laid in state at the Grand Palace.

The Imperial Couple were granted an audience with His Majesty the King at the Ambara Villa in the Dusit Palace. Pictures of the couple at the March 5 event were also displayed at the exhibition.

King Bhumibol and Emperor Akihito shared a passion for fish. The passion was passed on to Japanese Prince Akishino, who is scheduled to visit Thailand to attend the royal funeral ceremony this week.

A Thai official from the Culture Ministry told the media that Emperor Akihito during a national address marking his birthday last December mentioned the passing of King Bhumibol in what was believed to be an emotional message to a royal friend.

Thai ambassador Bansarn Bunnag said the ties between the two royal families had been the main pillar of Thai-Japanese relations over the past 130 years.

The exhibition at Soka University was one of several events to celebrate the long diplomatic relations between the countries.

In particular, the Imperial Couple's visit to Thailand in March was the most important for the reason that they were the first royal guests to see Thailand's new king, said Mr Bansarn. 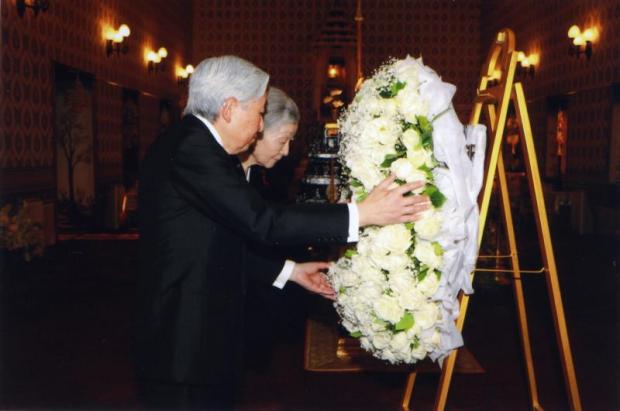 VISIT: A picture of the Imperial Couple laying a wreath before the royal urn. 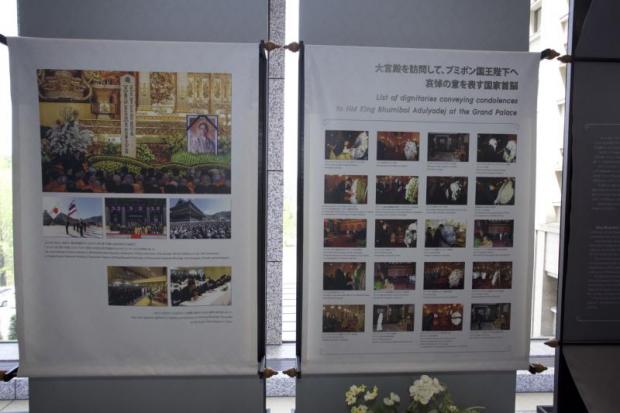 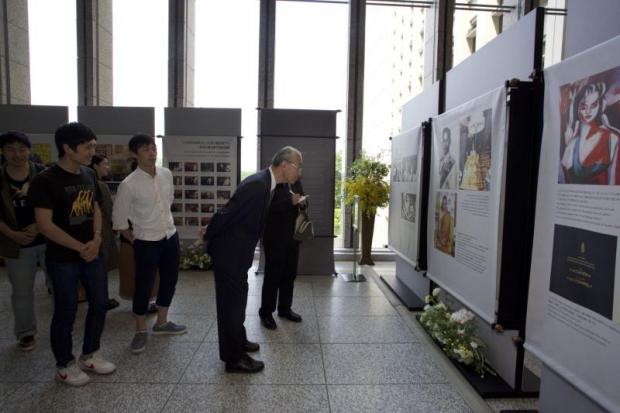 IMPRESSIVE: The exhibition venue, left, is adorned with white and yellow flowers. Pictures of dignitaries placing wreaths for the late king are on display at the exhibition, centre. A senior member of Soka University's administration looks at pictures of King Bhumibol, right. PHOTOS COURTESY OF THE CULTURE MINISTRY