Farewell to a King who stole our hearts
Thailand
Special Report

Farewell to a King who stole our hearts

MR Pridiyathorn Devakula, centre, and members of other royal lineages join the rehearsal for the royal funeral procession Thursday at Sanam Luang. (Photo by Apichart Jinakul)

When applications were announced for people of royal lineage to take part in the royal funeral procession, there was no hesitation on my part. It was the last thing I could do for my King, to show my love, respect and loyalty in my own small way.

It did dawn on me later, though, that I had not even considered my own physical capabilities, and whether I would be able to walk alongside those half my age in the gruelling conditions that were being recounted by veterans of former events.

The first few rehearsals were relatively painless. Held within army barracks, we practised the special dern plien thao step, a slow, gliding movement where your feet are lifted no more than one centimetre off the ground, in time with the solemn rhythm of the drums from the military marching band which will perform a medley of three songs: Phya Sok, Sansern Sua Pa and Sansern Phra Narayana. 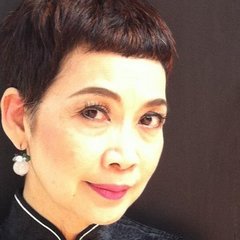 MR Usnisa Sukhsvasti is the former Bangkok Post Features Editor and is now member of the Chairman's Advisory Board, Mae Fah Luang Foundation under the Royal Patronage.

Procession 2 would be the main funeral procession, when the royal funerary urn is carried on the Great Victory Chariot from the corner of Wat Pho to the Phra Meru Mas at Sanam Luang.

The procession would proceed at a snail's pace, however, and the distance of about one kilometre would take all of two hours.

Not only did we have to learn how to walk with military precision, we also had to learn how to keep perfect straight rows of 10 by marking your neighbour's nose through the corner of your eye. Arms have to be kept straight, close to the body, not swinging, which results in aching shoulders and swollen fingers after a few hours.

It wasn't until the first rehearsal on location that we began to see the enormity of this undertaking. Everything was done with military precision; our group met up at the Bank of Thailand -- a 4am muster was later changed to 4:45am -- and we were transferred by boat to piers near Sanam Luang -- for us in Procession 2, it was at Yodpiman Pier, near Rajini School.

We then walked a few hundred metres to the Territorial Defence Command where we registered and had breakfast.

At 7:30am we had to line up to await the arrival of Procession 1 coming from Dusit Maha Prasart Hall. At 9:30am, it was left foot forward, in a wave of slow-motion solemnity, following the Great Victory Chariot.

Drones aloft caught every misplaced foot, every uneven row, every crooked hat, and these were duly checked, with subtle changes added such as hands to be placed at a 45 degree angle to your torso.

Procession 3 is the circumambulation of the Phra Meru Mas three times before the royal funerary urn is finally placed above the cremation pyre.

The rhythm changes to a march, which seems easier than the dern plien thao step, but is more challenging due to one having to turn the four corners which have to be tackled with precision.

After making three rounds of the Phra Meru Mas, we stand by as the royal sandalwood urn is being assembled. All in all, it's about six hours in the sun, or rain as the case may be.

It is physically demanding, and participants were gently fading away from their rows into the open arms of attending first aid teams who were prepared with everything from smelling salts to more extreme measures.

I was also listed for Procession 4, which would follow the royal reliquary urn from the Phra Meru Mas to the Grand Palace tomorrow, and Procession 5, to accompany the urn from Dusit Maha Prasat Throne Hall to be enshrined at the Chakri Throne Hall.

The more physically demanding it was, the more it made me think of the late King Bhumibol Adulyadej who braved the sun and rain, day in, day out, year in, year out for the most part of his 70-year reign.

The late King redefined the monarchy, a term that normally brings to mind crowns and jewels, pomp and circumstance.

But the image of the late King Bhumibol Adulyadej that comes to most people's minds is that of a king in the midst of his people, in some remote, dusty part of the country, perspiration dripping down his nose, map and pencil in hand, as he chats to villagers about their troubles.

No life of luxury for him, no breaks, no days off, no sick leave, no complaints.

Whether he's trudging through mud, wading through streams, climbing hills, it's all in a day's work. It was a mission that he set out for himself from the day of his coronation.

No terrain is too tough, no climate too harsh for him, so who are we to complain about a few hours' walk on well-paved roads. This is nothing compared to what he has done for us throughout his lifetime.