The effects of digitalisation

As 2017 began, no one thought they'd soon be using their smartphones with QR code-reading apps to pay for lunch at the food court. (Post Today photo)

This year marked a sea change with consumers became more accepting of digitalisation, especially regarding purchasing behaviour. From pre-purchase activities through to post-purchase consumption, evaluation and disposal activities, digitalisation affected all those behaviours.

As did opinion leaders and brand influencers, affecting many people's decisions to buy.

It is not hard to observe the current trend of consumer behaviour: people fixated on tiny electronic gadgets or making transactions via mobile phones. Digitalisation has been ingrained into our livelihood.

What kind of changes can we expect next year in terms of consumer behaviour as technology continues to make its presence felt across the globe?

As consumers rapidly accept digitalisation and the government works to transform the country into a cashless society, banks in 2018 will continue to move more products and services to online and mobile banking platforms in an effort to claim a larger customer base through first-mover advantage.

Predee Daochai, president of Kasikornbank (KBank), said the bank's transactions at brick-and-mortar branches and ATMs have not changed much in terms of both value and volume.

The traditional channels are still essential for some customers, but their growth rate is insignificant, he said.

KBank, the country's fourth-biggest lender by assets, is the largest mobile banking service provider with 8 million users. Its online transactions hit a new high at 150,000 per minute at the end of October from 100,000 earlier. Normally, banking transactions peak at the end of every month.

Local banks this year embraced a range of digital payment schemes, ranging from PromptPay, an online money transfer under the national e-payment initiative, to quick response (QR) code payment, which is expected to gain a footing next year.

For QR code payment, the central bank on Nov 13 allowed trial services for five banks to exit the regulatory sandbox to commercially roll out the new technology across the country.

Apart from adopting digital banking technology, banks are revamping their physical branch network -- permanently closing low-transaction branches and opening new ones in busy markets such as department stores, while turning their tellers into financial advisers.

Some 160 physical branches of the country's four largest banks by assets -- Bangkok Bank, Krungthai Bank, Siam Commercial Bank (SCB) and KBank -- were closed, reducing the number to 4,490 at the end of October from 4,650 at the end of 2016. 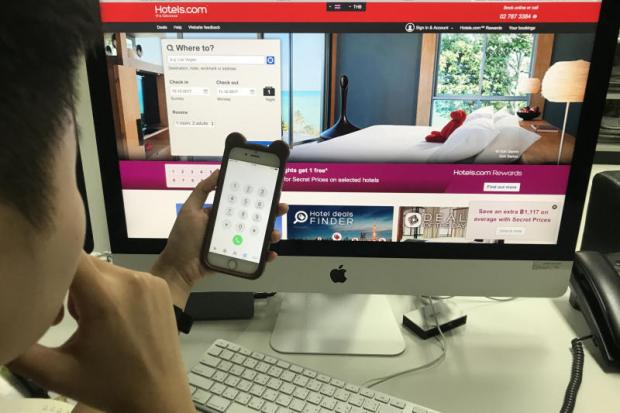 Moreover, SCB plans to integrate lifestyle features related to payments into its SCB Easy app to draw more users. For example, the bank is collaborating with lifestyle app Wongnai to provide search and pay features for dining, while users can also make donations through SCB Easy.

But unlike SCB Express, TMB's digital branches still have employees to provide traditional services and show customers how to use the digital services.

Digital innovations such as robotics and artificial intelligence (AI) will have a greater influence on investors' behaviour, with future investment poised to centre on the use of AI for data analytics and investment decisions.

Smith Banomyong, chief executive of SCB Asset Management (SCBAM), said AI has influenced the work processes of all industries and demand for AI will increase in the future. This development will come in three phases, he said.

The third phase of AI usage is associated with securities investment technology. It matches and sends trading orders, and can analyse targeted stocks in a portfolio and select those projected to have the highest returns based on acceptable risks.

SCBAM believes the AI trend will affect all industries, including the investment market. It is working to develop an AI programme focused on stock selection, and is convinced after two years of research its AI programme can generate higher average annual returns than the 5% offered by the Stock Exchange of Thailand index.

Mr Smith said AI funds will have more success if they can beat the targeted return generated through back testing. Other securities brokers and asset management companies are also studying this investment model to develop proprietary versions.

Some predict 2018 will be the year of a digital transformation for the Thai telecom and media sectors as the variety of over-the-top (OTT) services and Internet of Things (IoT) platforms grow.

Although many consumers have been using OTT services on a daily basis for years, and IoT platforms have become daily facilitators for specific groups of consumers this year, both are projected to become more widespread in 2018.

OTT refers to the digital applications or services operated on internet networks and are not based on the traditional network, such as mobile VoIP applications, mobile instant messaging, online video, television and online music.

OTT has increasingly become a threat to incumbent telecom operators because it provides a service on operators' networks without sharing any revenue with network owners. These operators spend a significant amount annually for network expansion.

The OTT TV model including on-demand programming has changed TV viewing patterns, affecting the TV industry's advertising and raising questions about the future of the market.

The country's IoT development is poised to leap forward after the telecom regulator approved on Nov 8 the final draft of utilisation of the 920-925 megahertz band for IoT services.

The move creates a spectrum standard for machine-to-machine connectivity and responds to the application of new technologies, the increasing utilisation of IoT devices, and could improve the efficiency of every sector in the country.

The IMC Institute believes the move by the National Broadcasting and Telecommunications Commission (NBTC) will make the cost of internet connectivity cheaper, enabling the government's vision of a digital society.

NBTC vice-chairman Settapong Malisuwan said OTT, IoT and the 4G/5G network will create a new digital convergence of products and services. He predicted there will be new popular businesses related to big data analytics through the 4G/5G network and IoT platform.

Traditional broadcasters and telecom operators likely face heavy disruption in 2018. They need to improve or alter their business models to serve digital changes in consumer behaviour.

The arrival of JD.com partnering with Central Group as well as the anticipated footprint of Amazon.com in domestic territory next year will intensify competition among e-commerce behemoths as they bid to retain customers.

This was the first year online shopping ranked among the top five purposes on the Thailand Internet User survey. The country's online retail business is expected to grow from US$2.9 billion (95 billion baht) in 2016 to $11.1 billion in 2025, while brands and e-commerce providers shift to an omni-channel strategy rather than adopting a pure online or brick-and-mortar strategy.

Social e-commerce has also gained in popularity as Thailand has 48 million Facebook users and over 11 million Instagram users. Facebook Thailand found Thais' purchases on its site in the fourth quarter were 70% higher than the rest of the year, with the majority of buyers being Millennials.

Another consumer trend expected in 2018 is netizens buying foreign products, especially those made in China, for low prices or cheap shipping fees, which should attract Thais to import more overseas products.

Lazada Thailand, owned by Alibaba, has already introduced the soft launch of its Taobao Collection, which imports Chinese products from merchants in Alibaba's Taobao for Thai consumers.

The new platforms push the growth of meta-search engines such as Trivago, TripAdvisor and Skyscanner, driving down prices and changing the face of online booking. The rise of the sharing economy, exemplified by services like Uber and Airbnb, has further diversified what consumers expect from the tourism industry.

"Thanks to technology, the industry is in a constant state of flux, and the lines of service will only continue to blur as technology and AI become more advanced," Ms Prachoom said.

"Every company in the industry must constantly innovate to meet consumer preferences while simultaneously maintaining impeccable brand standards. We must develop creative solutions that incorporate modern technology to create even greater experiences that will allow the industry to prosper."

She said social media is all about offering added value for guests and customers.

"Travel and tourism operators now use their online presence to not only tell their brand stories and offer promotions, but also engage people through useful information, games, competitions, and user-generated content. It's all about building trust. Without it, you cannot convert browsers into buyers," said Ms Prachoom.

With fashion and technology rapidly changing, a product's life cycle will become shorter and people will have less brand loyalty, he said.

Mr Chatrchai said one-price lifestyle stores, a retail sector that has grown sharply in Thailand in recent years, will continue to grow next year.

Apart from Daiso, Miniso and Just Buy, discount lifestyle store Don Quijote from Japan is due to debut in Bangkok on Ekamai Soi 5 in the fourth quarter of next year.

There are over 200 one-price lifestyle stores in the Thai market.

While the government wants to promote electric vehicle production among its automotive industry in the coming decades, car-sharing is expected to be a new trend for motorists that will lead to a decline in car ownership. 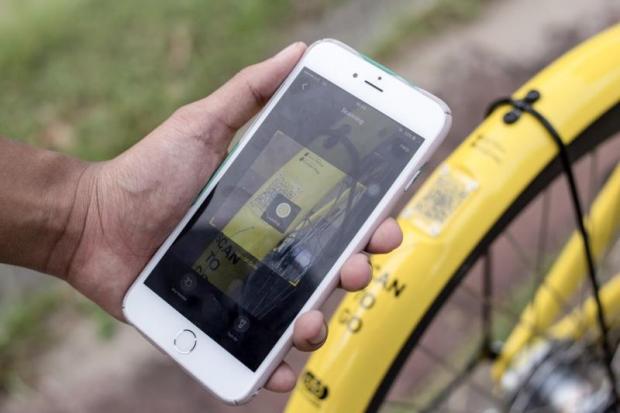 A bike-sharing service uses QR code, allowing the user to instantly unlock the bike and ride away.

Car-sharing is the new model for short-term car rental, calculated by hours instead of days or months. It is normally available via mobile application, so each driver can book cars anytime while car-sharing operators provide parking spots across cites, eliminating the need for round trips.

Car-sharing is a popular mode of city transport in metropolitan locations in the US, Europe, Australia, and parts of Asia because of increasing population density and well-organised public transport.

In Thailand, some startup firms launched the car-sharing model a few years ago, such as Haupcar and Drivemate, but they have yet to find a footing in the market.

"Most city dwellers still prefer to own cars," said the SCBEIC analysis. "Moreover, car parking spots in the central business district are insufficient to support the car-sharing model."

The country's public transport regulations have not supported car-sharing as the cost of a taxi fare is cheaper than the cost of car-sharing, at 10-20 baht for 30 minutes or 10 kilometres of driving, said SCBEIC.

There are three types of car-sharing: a carpool, where car owners are hired as a taxi such as with Uber or GrabCar; peer-to-peer, where car owners rent their vehicles out for short-term renters; and business-to-consumer, where corporate firms rent cars to their registered members via a website or mobile app, such as Zipcar.

SCBEIC cited research from the Transportation Sustainability Research Center and the Car Sharing Association that B2C car-sharing had global growth of 39% annually. The industry has 6 million members worldwide, expected to reach 26 million by 2020.

Millennials, or those born from 1980 to 2000, are more familiar with public transport than the older Generation X and Baby Boomers, making Millennials more open to ride-sharing than owning personal cars, said SCBEIC.

In Bangkok, the population of millennials represents 30% of the total.

Haupcar has a fleet of 30 cars, available at 30 parking spots in universities, Bangkok's mass transit stations and condominiums.

"The IEE study said one shared car could replace up to eight private cars. There are up to 5 million cars in Bangkok, and if only 10% of motorists turn to car-sharing, we could reduce roughly 4 million cars from our roads," Mr Tanawat said.