Cutting through the haze

By the end of the year, the northern provinces of Thailand will be put on high alert for summer haze. The conditions from February to April are dry, increasing the risk of wildfires. But it's also the period when farmers light fires to clear their land for crop cultivation -- flames which could spread into forest areas, sending up haze and acting as a huge source of carbon emission.

As those familiar with wildfires, the villagers of Baan Omlong in Chiang Mai's Samoeng district are now planning and preparing to prevent the problem.

"We have experienced damage by fire for many years. It became stronger each year, engulfed the forest and our temple. The forest couldn't grow and we faced a water shortage problem because the ground was very dry," said Phraveerayuth Aphiviro, a monk at Phra That Doi Pha Som located on a mountain near the village.

Along with natural causes, fire is exacerbated by human activities including burning land for clearance or burning forests to expand farmland into reserved areas.

Some locals believe that burning the forest will allow mushrooms and wild plants to sprout. Hunters also burn the forest to chase out animals from the woods. The temple at the top of the mountain is often surrounded by haze in the summer which affects the monks who are suffocated by the smoke.

While fire has caused much damage to Baan Omlong over the years, the last three years have seen no flames -- thanks to the initiative of the monks and the community.

"In 2007, we began to study other villages who managed to control the fires. We brought back the know-how to adopt in our village," said Phraveerayuth Aphiviro. "The key is to give local people a sense of ownership of the forest."

Phraveerayuth Aphiviro and some members of the community erected a check-dam along water resources to preserve moisture in the ground. They planted forest trees, made firebreaks and set up a fire-watch team that took turns to monitor the forest during the summer.

Few people initially saw the benefits of those actions. But after five years, the forest recovered while the severity of wildfires was reduced. Mushrooms and wild plants grew well, creating more income for the community, encouraging them to change their habits and collaborate in fire prevention operations.

More than 30 households now take care of 10,000 rai of forest and community land.

"When they see the results, they surrender to the evidence," said Phraveerayuth Aphiviro. "But that took many years. Extinguishing the flames alone does not work. Fires will keep igniting in new spots. We must make locals see the value of the forest and want to protect it as their own treasure."

Baan Omlong is likely to prevent fires this coming summer. But flames in some other areas have yet to be permanently extinguished. 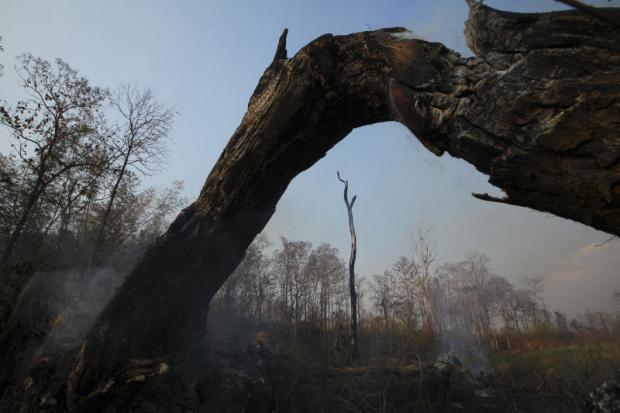 OUT OF CONTROL: A forest fire spreads along a road in Ngao district of Lampang. The haze causes severe air pollution in northern Thailand. PHOTO: Patipat Janthong

Measures to limit and prevent haze in the next dry season start as early as the new fiscal year, which begins in October.

The administration in Chiang Mai, one of the most haze-affected provinces, began preparations by involving multiple sectors to strengthen local monitoring and warning systems in the wild and farmlands.

With evidence showing that wildfires in the North are mainly the result of human agency rather than natural causes, working with communities to stop burning to clear farmland is one of the key measures.

Charging the culprits is another solution. Around 80 people were arrested for causing fires so far this year.

The most recent extreme haze in the North was in 2014 when Southeast Asia was swept by drought as a result of a particularly long period of El Nino.

Nine northern provinces -- Chiang Mai, Chiang Rai, Lampang, Lamphun, Mae Hong Son, Nan, Phrae, Phayao and Tak -- were the most affected by the haze. It was a summer with few days of blue sky -- particulate matter less than 10 micrometres (PM10) was detected for 47 days between January and April. Many flights were delayed.

Residents of tourist cities such as Chiang Mai had to wear masks outdoors because the air pollution was well over the safe limit.

Some 49,939 rai of forest nationwide was damaged by fire that summer, more than half in the North. Almost 9,040 hotspots were discovered in the region -- almost half in the agricultural area -- according to the Forest Protection and Fire Control Office.

"With our capacity and available mechanism, [2018] should see more limited spread of fire. But we also need to determine if climate changes such as a longer dry period would have an impact," Natural Resources and Environment Minister Surasak Karnjanarat told reporters after meeting with authorities in Lampang in early December.

"We like to blame neighbouring countries for contributing to the haze. But in fact, our haze also crosses their borders too. Collaboration among Asean nations is essential."

The collaboration is driven by the Asean Agreement on Transboundary Haze Pollution, which came into force in 2003 after Indonesia's haze crisis. The agreement targets to end transboundary haze by 2020.

Atthaphon Charoenchansa, deputy director of the Royal Forest Department, said Thai ministers and officials had held talks with their counterparts in Myanmar and Laos to prepare for fires in the coming dry season.

The collaboration includes sharing of resources to extinguish fires as soon as they start while encouraging neighbouring countries to manage and limit the burning of agricultural land. >> 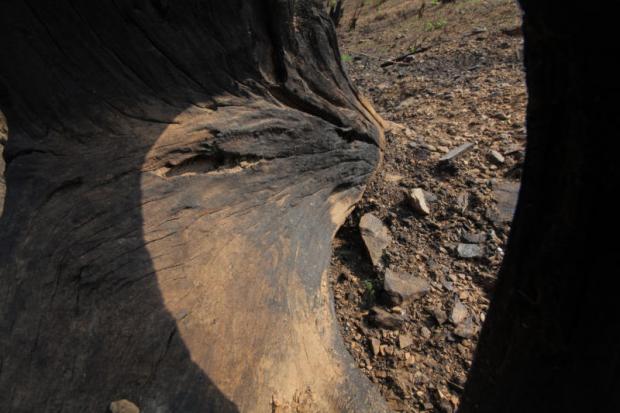 Transboundary haze in Southeast Asia is not only a matter for the immediate region.

According to recent studies by a Chinese research team led by Cao Junji, director of the Beijing-based Institute of Earth Environment China Academy of Sciences, haze from northern Thailand, Laos and Myanmar can reach as far as southwestern China.

Using emissions data from April 18-21, 2014 -- the period that recorded high emissions of haze -- and aerosol and climate modelling, Prof Cao's team found that black carbon from burning, particularly in the upper Mekong region, could reach as far as Guangdong, Guangxi, Yunnan, Sichuan, east Tibet and part of China's east coast.

Haze in the upper Mekong also reduced temperatures by over one degree in affected areas.

Black carbon is a component of fine particulate matter formed through the incomplete combustion of fossil fuels, biofuels and biomass. It is very harmful to humans and is linked to outdoor air pollution that causes some three million deaths a year, according to the World Health Organization.

"The purpose of our project is to know the impact of carbon emitted from Southeast Asia, especially from northern Thailand, so we can use the results as the tracer for other pollutants," said Prof Cao.

"Black carbon is closely linked to climate change and air pollution. This project will not only enable us to help resolve climate issues but will also give us more information on pollution."

Prof Cao's research is one of nine projects co-funded by the Thailand Research Fund and the National Natural Science Foundation of China.

Next year will see the results of longer periods of monitoring black carbon from burning in northern Thailand and other countries, which will lead to a breakdown of emissions produced by sources and nations.

During the fifth China-Thailand Joint Conference on Climate Change in Chiang Mai in November, Prof Cao presented his research on black carbon in collaboration with Siwatt Pongpiachan, director of the NIDA Center for Research & Development of Disaster Prevention and Management.

They will piece together data to discover the radiative effects of carbonaceous aerosols emitted from biomass burning in middle- and low-latitude regions in Asia and its influence on monsoon precipitation.

The results of this research will help to forecast trends in biomass burning, its emissions and the direct and indirect effects on climate over the next 30 years.

The research will contribute suggestions or reports to relevant agencies in Thailand to change the practice of burning because its impact on human health and the environment crosses borders and affects many nations, Prof Cao said. n