The discovery of a hidden cemetary brings past realities alive

FACING THE PAST: A model assembled by pieces of skeleton from a woman estimated to be 13,000 years old found at Tham Lod.

The ground beneath us houses a wealth of essential clues to our common past, and archaeologists work to decode the treasures left by our ancestors and their connection to the 7.6 billion people who walk the Earth today.

One group of archaeologists and academics from Silpakorn University have spent the past two decades studying historical sites around the country in an attempt to find out exactly where Thai people come from.

Caves provide a rich hunting ground, and the discovery of Phi Man Loong Long Rak (Coffin cave) in Pang Ma Pha district of Mae Hong Son province in 2013 has been of particular interest.

A cemetery found hidden inside the cave turned up bones, tools and accessories linked to the hill tribe people of the area, dating back to prehistoric times.

THE PAST BROUGHT TO LIFE

Rasmi Shoocongdej, a 57-year lecturer from Silpakorn University’s Faculty of Archeology, has led the survey team since 2011. She said Phi Man Loong Long Rak is an extraordinary find, especially as it contained evidence of wooden coffins.

This followed the discovery of a 3,000-yearold wooden coffin in Kanchanaburi − the oldest known example in Thailand − and together confirmed the practice of coffin-making in ancient times.

“We found many pieces of bones inside the coffin, as well some pieces of tools in Phi Man Loong Long Rak,” Ms Rasmi said. “What is also interesting is that we found evidence of multiple bodies inside single coffins, suggesting some individual coffins were used for entire families.”

To establish whether the human remains found in the coffins were related, the team collected bone samples and sent them to a university in Denmark for DNA analysis. Results are expected around the middle of this year.

The team is particularly interested in where these people came from, though. They will use the same DNA to make a comparison with bone samples collected from remains found in southern China. If a link is established, this will provide firm evidence of a close link between Thailand’s hill tribes and southern China.

“The first deduction we have made from examining the teeth is that they [both the hill tribe and southern Chinese people] ate rice, and now we are waiting for more information to help us reach a conclusion,” Ms Rasmi said.

She said the team is narrowing down its findings by studying cultural items found in southern China and Thailand’s North, such as textiles, carvings, ornamental bones and coffin decorations. Ms Rasmi said similarities had been noticed between Chinese examples and those from the Yeoh ethnic minority.

For example, in Phi Man Loong Long Rak, the team found hemp cloth which they believe was used for wrapping bodies, and pieces of big bones used as “gifts” for the departed. Both customs are known to be part of Chinese death rites.

The archaeologists believe the southern Chinese occupied what is now northern Thailand around 2,000 years ago. The hill tribes are thought to be more likely to be ethnically “pure” due to their isolation.

However, Ms Rasmi conceded that it will be impossible to confirm that Thais from other parts of the country have Chinese ancestors, as the country has seen many generations of mixing as people from all over Asia have travelled to and settled in Thailand over the centuries. Wokanya Na Nongkhai, a 31-year-old independent researcher working on the team, said locals accidentally found the coffins inside the cave in 2010 and informed their village chief who in turn told the archaeologists, who were surveying other caves in the area at the time.

The team came to survey Phi Man Loong Long Rak but were initially met with resistance from suspicious locals, who feared that spirits inside the cave might be disturbed. It took three years for the archaeologists to convince the villagers to allow them access.

Eventually this access was granted, on condition that the local community was allowed to work with the team and carefully oversee their activities.

Ms Wokanya said there was much enthusiasm for the survey in the early days, but the lonely and arduous nature of the work soon pared back the numbers.

“We had many people at the beginning, but as time past, we were left with only women,” she said. “The men may have left the site because it was lonely there.

Ms Wokanya said those working at the site had to walk some 2km uphill to get to the cave entrance, and from there they would have to climb down a bamboo ladder to reach the cave’s floor.

To get deeper inside, a small entrance leads to a tight and twisting route of around 50 metres long which must be slowly and carefully navigated. Eventually, this leads to two zones; chamber A and chamber B. At eight metres wide and nine metres long, chamber A is considered the main hall of the cemetery.

Twenty teakwood coffins of about 2 metres long were found inside chamber A. DNA from the coffins showed that they were made from teak planted in a low-lying area. Selected trees would have been cut down and divided into two pieces, with made a hole cut into the middle to put the dead body inside. A resin lacquer was applied to cover any small holes in the wood. The head of coffin was crafted by a metal tool, with the design similar to those found in the southern China around the same time.

The coffins are believed to have each contained numerous bodies. Evidence suggests there were as many as 116 bodies inside the 20 coffins, and there may be more still under the ground which has not yet been surveyed. The coffins are thought to be around 1,600-1,900 years old.

Ms Wokanya said chamber B is quite different as the coffins found there were housed inside the walls, in hidden areas between rocks.

“If you didn’t pay close attention, you would not see the coffins located above your head,” she said.

As for why these coffins were hidden whereas the ones in chamber A were not, she suggested they may have been the bodies of more respected people, who “wanted to rest in peace far away from any disturbance”. LEADING THE WAY: Rasmi Shoocongdej, a lecturer from Silpakorn University’s Faculty of Archeology, leads the research team at Phi Man Loong Long Rak, where traces of prehistoric times were found.

Human skeletons and bones can offer up just as many clues to the past as cultural artefacts.

She further explained that bones can also tell us about the cause of death. For example, unusual thickness of a skeleton may indicate a blood disease.

“Bones are like diary entries,” Ms Natthamon said. “They can tell us about a person’s life. We just need to know how to read them.”

Ms Natthamon has honed her expertise through studying more than 10,000 pieces of bone. She is best known for reconstructing the body of a woman who lived in Thailand some 13,000 years ago. Pieces of the woman’s skeleton were found in Phueng Pha Tham Lod and Ms Natthamon used computer software to scan the bone parts and digitally reconstruct her skeleton.

She is currently working to do the same with the skeleton of a 9,700-year-old man found in Ban Rai cave.

Regarding the bones found in Phi Man Loong Long Rak, Ms Natthamon said it was likely that two rounds of burial ceremony were staged. She thinks that after the first body or bodies were placed in the coffins and the corpses perished, the coffins may have been used again, with the first bodies cleared out and new ones placed inside, and then buried anew.

CAVED IN: A piece of wood suspected to be used as a base for carrying the seven coffins found in Chamber B of the archaeological site, left. Pieces of human bones found on the cave floor, right. STEPPING INTO THE PAST: Research team members descend a ladder leading to the cave floor. A tight and twisting route of around 50 metres must be navigated to get to the bottom of it.

Work at Phi Man Loong Long Rak has been on hold since 2016, as the government’s Department of Fine Arts is in the process of registering it as national heritage site. After this status is granted, and further use of the site will require a permit, and a condition of any permit will be that local consultation and participation will be mandatory.

Ms Rasmi said it will therefore be up to the locals to decide whether to develop the site as a historical attraction, or to preserve it for further studies once the necessary equipment and technology is upgraded.

“It is a place for spirits,” she said. “People who come here must respect the place and the death rites.”

Ms Rasmi said many similar caves with coffins have been raided by people who want to use ancient bones as components in amulets, or even by fellow archaeologists who take historical objects to sell or for other personal benefits.

“All things found in the cave must be kept inside so there is no disturbance,” she said. “Even the moisture from a human’s skin can ruin the items. Proper management of the site requires very careful consideration.” IN THE RIGHT DIRECTION: A map to help the research team navigate the cave findings, 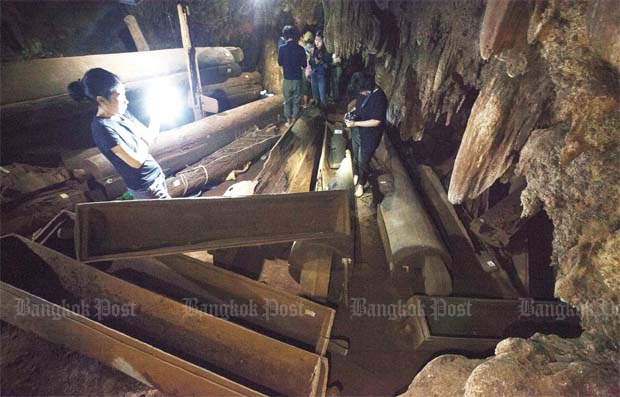 SHINING A LIGHT: A researcher studies an object found in Chamber A, 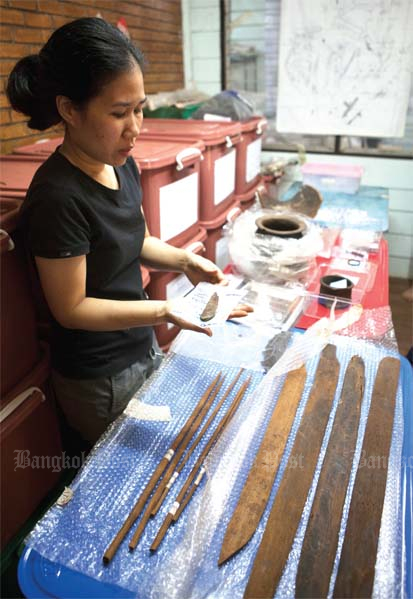 BRUSHING UP KNOWLEDGE: Clockwise from top left, collected bone, teeth and other objects found in Phi Man Loong Long Rak are studied at the project’s office at the Nature and Wildlife Study Centre.