Bringing sights to the blind

A group of visually impaired and blind tourists from Britain have visited and explored attractions in Thailand for the first time, marking the host's readiness for more niche markets from Europe.

Seable Holidays, a travel company based in London that specialises in tour arrangements for disable people, worked with Ayutthaya travel agency Nutty's Adventures to bring the group of 12 to attractions in seven provinces during a Feb 11-21 trip.

Nutty's Adventures has participated in the annual tourism trade fair and placed Thailand on the global map with special offers for disabled tourists.

"We came to survey tourism products in Thailand before hosting an 11-day trip for our clients," Mr La Rocca says.

His company had been looking for destinations outside European markets for blind and visually impaired customers after years of touring Britain and Europe.

"Generally we don't want to bring our customers to packed or crowded cities, but we focus on taking them to explore traditional culture and local attractions," Mr La Rocca says.

He says Thailand has high potential to serve niche markets not only from Britain, but also from other countries in Europe and the rest of the world because the country has a variety of unique tourism offerings.

"Seable Holidays is planning on catering to disabled tourists from other countries such as Germany, the Netherlands and Italy to come to Thailand in the near future," Mr La Rocca says.

To cope with the expected influx of demand, Seable Holidays plans to introduce new routes in Southeast Asia, probably starting with Bali in Indonesia.

Expenses may fluctuate, however, due to the various services and additional facilities needed.

The average cost for the 11-day trip is 3,000 baht per person per day, or 33,000 per person per trip. This cost excludes the subsidy given by Britain's Population and Community Development Association.

Nithi Subhongsang, chief executive of Nutty's Adventures, says Thailand is ready to extend to niche markets, including for disabled and blind tourists.

"Having a group of 12 blind and visually impaired people might not generate huge income for the business, but this can uplift the country's image as a friendly destination for all," Mr Nithi says.

He says Thailand can promote many other local activities and attractions to these niche markets.

Mr La Rocca and Mr Nithi have urged the Thai government to invest in tourism facilities and accessibility to accommodate disabled tourists.

They also asked the government to educate officials and those involved in the tourism industry to better understand disable tourists and the concept of tourism for all.

Matthew Clark, one of the visually impaired tourists on the trip to Thailand, says he's impressed with Thai culture and the local food, as well as Thai hospitality. He suggests that suppliers such as attraction and travel operators consider tailoring special programmes for disabled people.

"If Thailand can offer [special-needs facilities], the country will be able to become a popular destination for all," Mr Clark says.

The tour group explored the village of Baan Dok Bua in Phayao province, walking along the natural trails and meeting face-to-face with locals.

"We have tried and learned many things, such as how to make chicken coops while learning the history of cockfighting and how to farm rice organically," Mr Clark says.

In the South, the group learned how to make phon, a local drum, and practised playing it, and got hands-on experience in wickerwork made from krajood, a local variety of sedge.

The group also visited a bamboo garden where there was a performance of Manohra, an ancient southern dance and musical performance, and later visited the community shadow-puppet centre, where they had the opportunity to try making shadow puppets themselves.

Prachyakorn Chaiyakot, vice-president of the Thai Responsible Tourism Association, says the TRTA was formed in 2017 by a group of travel agents interested in responsible tourism. The association has 15 members across the country.

"Our association is set to run business with true responsibility," Mr Prachyakorn says. "Our aim is to bring tourists into local communities and generate income for local people, preserve the environment and drive community sustainability."

The association says it will continue to work with tour operators in domestic and overseas markets to boost responsible tourism.

In the long term, the association hopes to promote tourist attractions in hundreds of districts across the country and aims to have at least one member per province. 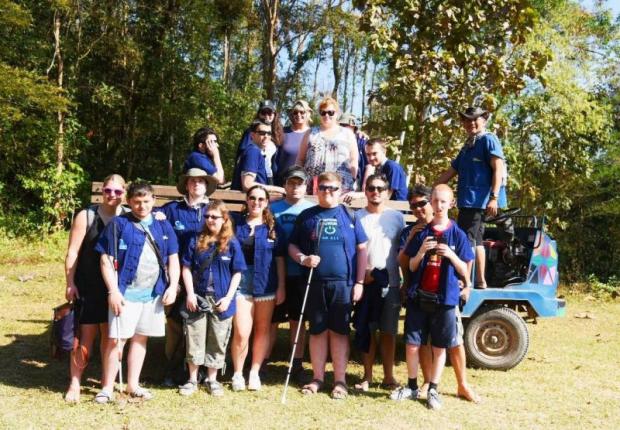 The group of visually impaired and blind tourists from Britain.

"In order to ensure that locals earn a greater share of the profit from tourism and tourists can experience rare products, market research is necessary," Ms Supawadee says.

She says many local products and activities can be developed and promoted to be new attractions not only for disabled or blind people, but for everyone.

"Thailand is one of the most-visited countries in the world," she says. "This is our opportunity to offer a wide range of products to serve different tourist groups."

Tourism is a key engine for the Thai economy. The industry has expanded substantially over the past five years and makes up 13% of Thailand's GDP in 2017, according to research published by the Stock Exchange of Thailand.

Thailand ranks third in revenue from tourism globally, and the country is in ninth place for foreign tourist arrivals, according to the SET.