NET GAINS: A fisherman collects his catch after returning to the pier. Moves are under way to bring the industry into international standards.

Some were stuck at sea, or stranded on islands, for years. Others were drugged and then woke up offshore, turned into slaves overnight. All were lied to, and those lucky enough to be rescued all told similar stories of a "living hell" on board Thailand's fishing boats.

Prime Minister Prayut Chan-o-cha tackled the issue last week, when he visited Samut Sakhon and Phetchaburi provinces during his mobile cabinet trip. His primary goal was to expedite a crackdown on the persisting issues of illegal, unreported, and unregulated (IUU) fishing and human trafficking in the industry.

In a speech, he told locals and government officials in Samut Sakhon: "I came here to express my commitment in dealing with IUU and human trafficking in fishery."

The prime minister had already set measures under the European Union's recommendations in a bid to create good fisheries practices under the global standard, so that foreign customers could be sure that all marine produce from Thailand is IUU-free.

The EU had issued numerous warnings to Thailand over its IUU fishing activities, but no serious action was taken until 2015, when the country was issued with a "yellow card". This meant that unless Thailand made significant, verifiable progress on the issue, it would be banned from shipping seafood to EU markets -- a move that could cost the economy more than US$300 million a year.

While in Samut Sakhon last week, Gen Prayut and his cabinet members last week visited the Labour Rights Promotion Network Foundation (LPN), which provides help to migrant workers including those in the fisheries sector, Thai Union Group, the world's largest exporter of processed seafood, and the Fish Marketing Organisation.

Greeting the premier and his cabinet members in this fishing town were not only current workers in the industry, but also a handful of fishermen who had fallen prey to forced labour practices, many of whom had been held captive on Ambon and Benjina islands in Indonesia.

Some fishermen went to work on board the boats with the hope that a better life awaited them there. 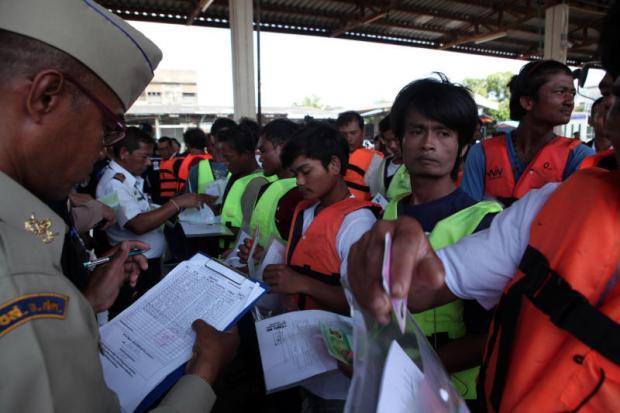 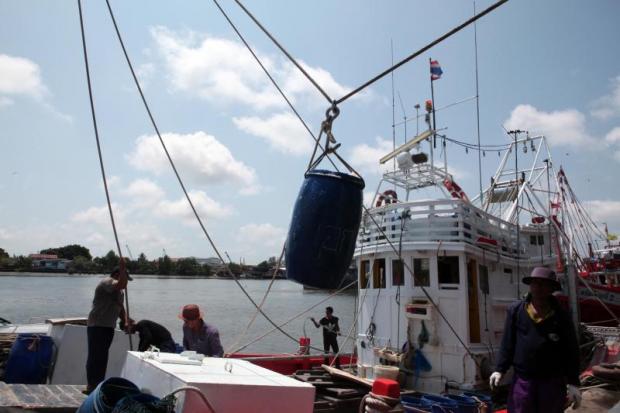 ALL AT SEA: Thailand has come under fire for its fishing practices, but improvements have been noted.

Some were lured by the promise of a 2% share of profit on sales of fish after the boat returned to shore, only to be left disillusioned by a harsh reality of broken promises and back-breaking work. They were faced with harsh working conditions, every day and with no stated finishing date, on the boats and islands that they were held captive on.

Watcharin Chanchoohon, 49, first went to work on board a ship of his own accord back in 2008, but he was kept on Bejina island for almost seven years, with no means of escape. He was finally rescued by the LPN in 2015.

Mr Watcharin reported that he was paid just 200,000 baht for the entirety of his seven years' labour. The 2% profit share he had been promised was nowhere to be found.

"There was no written contract; only word of mouth. I couldn't do anything [to prove I was owed this money]," he said.

Mr Watcharin said throughout the seven years that he had been working on board, he had to endure harsh treatment and was forced to work relentlessly.

"I was kept on an island and was not allowed to go anywhere else," he said.

He said he wants nothing more than for the government to ensure the safety of workers in the fishery industry and to disseminate good practice among employers and prospective employees who wish to work as fishermen in foreign waters.

"I also want the government to mandate that employers write contracts that are just and fair to the workers, and to abide by these contracts," he said.

Another fisherman, Akadech Silue, claimed he was enjoying a night out in a karaoke bar in Samut Sakhon when he passed out, only to find himself on board a fishing boat after he woke up two days later.

"I woke up and found out that I was in the middle of the sea. I later learned that I was in Indonesia. Once I was there, I had no other choice but to work," he recounted.

Apart from harsh conditions that he described as a "living hell", he told of the brutality he experienced first-hand on board.

"One fisherman was severely beaten with a steel rod," he said.

"Once the person who did that found that the person he had beaten was lying dead on the floor, he ordered me to carry the corpse and store it in the freezer, together with the fish caught from the sea," he said.

Adding to the pain was that the skipper who committed such an atrocity was a fellow Thai, he said.

Mr Akadech said the person who sedated him and took him onboard the fishing boat has already been brought to justice. His case has gone before the court and has been settled, but Mr Akadech said he has not received the compensation awarded to him. 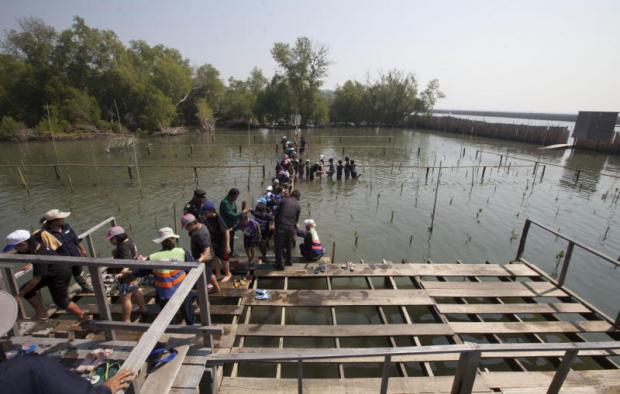 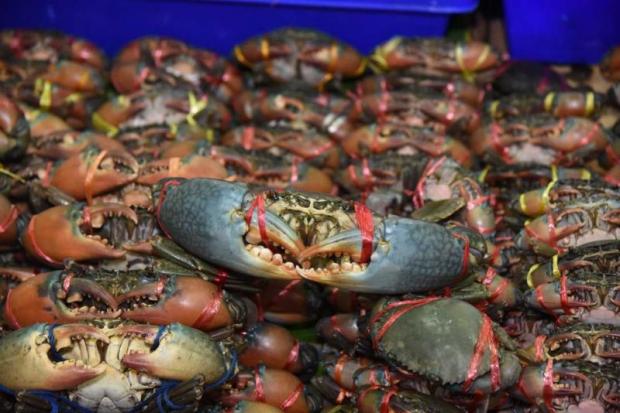 Sharing their experiences and opinions, the group of fishermen interviewed said they think the government was not proactive enough in providing help to the stranded fishermen, and that they have not received any further help or assistance.

LPN, the fishermen said, was the only agency which had helped them, by staging the rescue operation.

MFA spokesperson Busadee Santipitaks said that the Royal Thai Embassy in Jakarta has saved 1,983 Thai fishery crews since October 2014. However, the Thai embassy could not provide help to the workers of other nationalities, according to international agreements. In such cases, the Thai embassy contacted non-governmental organisations to help them, Ms Busadee said.

Gen Chatchai Sarikulya, deputy prime minister and former minister of the Ministry of Agriculture and Cooperatives, said that the government has turned its attentions back to the fishery issue not only in an attempt to get the EU's yellow card lifted, but with the ultimate goal of ensuring the country's marine resources remain sustainable.

"Our indicator of success would not be freedom from the yellow card, but the fertility of our marine resources," Gen Chatchai said.

"If we can achieve this, it means we are moving in the right direction. We aim to be completely IUU-free, with the support of the EU."

IUU-free status would mean all fishing activities are monitored with tools set up by the government, such as a tracking system for labour and produce, information sharing, workers properly trained in good fishing practices, and more.

The government will also establish a certification system so that all vessels and equipment entering Thai ports can be properly documented according to a nationwide protocol.

Gen Chatchai said achieving all this might take two years or more, but in doing so, Thailand will be well prepared to tackle illegal fishing activities and its industry practices will be conducted in line with international standards.

He said that Thailand furthermore will be able to play a key role in tackling illegal fishing activities in the wider Asean region.

The deputy prime minister added that the country is ready to welcome an EU team on April 4-11 to inspect the country's progress in dealing with IUU problems. 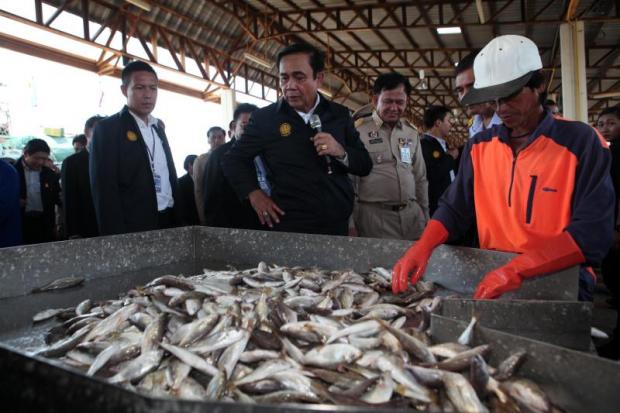 PREMIER'S SHIP: Gen Prayut inspects a catch at a pier in Samut Sakhon.

According to the Enforcement Coordinating Centre-Maritime Information Sharing Centre, there are 6,905 trawlers weighing more than 10 ton gross, which are required by law to report their arrivals and departures. These reports will be sent to the Fishing Info system set up by the Department of Fisheries, which uses a Vessel Monitoring System (VMS) to instantly verify licences issued by the Department of Marine and Coastal Resources.

Meanwhile, details of trawlers' crews on board must be logged in a seaman's book, and a trawler captain is expected to keep a logbook detailing fish catches and the location of where they had been fishing. A sensor system will also be employed to monitor the use of fishing gears to ensure they are all legal.

The government is phasing in eye-scanners for migrant workers as a means to verify their identities. So far, 13,498 of 85,411 known alien workers have had their eyes scanned, or a little fewer than 16%.

Mongkol Sukcharoenkana, president of the National Fisheries Association of Thailand, voiced his confidence that the country will be able to achieve sustainable marine resources status with a well-regulated system and the cooperation of all stakeholders.

At least, Mr Mongkol said, the association would like to reduce the number of commercial trawlers by half, from 20,000 to 10,000, or even more if the government implements a policy to buy unwanted trawlers for destruction. Such a programme would cost about 2 billion baht, he said.

He added that a smaller number of trawlers in the sea will allow the population of marine species to regenerate.